TEN:2   The very simple act of dividing the gallery walls in to ten sections once again, and once again inviting ten carefully selected artists to do whatever they wish within their space…

following on from the success of the February TEN show at Cultivate, the format will now be developed as an ongoing series…

TEN:2 – Once again we’re going to divide our walls in to TEN areas (with black tape) and invite TEN artists to take one area each

Artists will once again be invited to do what they want with their space, fill it with one big canvas or piece, fill it will lots of small affordable pieces of work, install something, take it in a minimal direction and make a bold statement with one piece..

Here’s what happened at the first TEN show –

Though much of his work has been concerned with collage and printmaking, the incorporation of woven tapestry and the appropriation of imagery into some of his pieces as a ‘base’, has afforded Cos the chance to work on what he describes as the ‘borderline’, a place where attempts can be made to create a point of juncture, suturing the varying media he employs. Some of his works hint at the central paradox of this concept, with the applied technique making up the tangible mass of the figure; the physical ‘counterpart’ of the shadow, a tying of the unconscious body whilst maintaining a critical instability.

Cos Ahmet works are of an intimate scale, forcing the viewer to be up, close and personal with the artist’s many altered egos and guises, all at once becoming immersed in their own encounters and shadows. Recent projects and the experimentation in scale has offered Cos a new direction and platform in producing objects and installations, extending his established language.

“I paint paint, some more, get my pens, draw a bit, like a drink” so says his Flikr,

“Living the life like the lysergic gods of limbo would have asked for.lets all wait for the all mighty magical colour disseminators to bring what they have to the table, the table of lewis carrol.the tea party of numbers” so says his Facebook

3 – LAURA BODO LAIBER – ”I prefer the concentrated to the diluted. All that I could be and still, I am nothing. How I love and humiliate, how far I go and ask for closeness. I float in my flood and scream like a crazy and dirty old man, hiding in his hermetic cave.” Bodo Lajber

Whenever I am creating, I am singing or crying. Making art is one of the most natural processes in my life. In every work I create, I put all I have inside. Every piece tells a story, and it is the result of a very specific feeling. All of them are unique pieces created in a time of internal burning.

I find no sense in creating a piece without having a strong sickening need to do so, these pieces are made of fire.

“She doesn’t like to talk about herself and her work, she’d rather let the pictures talk and evoke. Born in Milan, but with a bohemian soul, she moved to Paris as soon as she finished her studies, thanks to the inspiring book her mother gave her on her 20th birthday: Just Kids by Patti Smith. After 6 months of vie boheme in the 15th arrondissement, she came to London. Her pictures are mostly influenced by books and music rather than other photographers: from Isabel Allende to Dante Alighieri, from Morrissey to Bowie, her world is an hidden planet where she found “her lost control”. 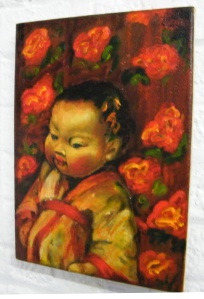 5 – ZOE CROSSE   – My paintings evolve out of a constant search for an ideal symbiosis between form and content they seem to be tinged with a sense of loss and nostalgia and have been derived from tangents in and around identity.

The process is often concerned with chaos, chance and disruption; It is eclectic and seems to be what can only be described as rhizomatous[1]; By employing a variety of  processes such as under painting; the use of layers of glazes and resins, which at times  dissolve and bleed into other images, the subject becomes dissipated and the viewer is left to fill in the gaps; through gaps in the image the process can sometimes be revealed;  by deliberately  employing  techniques which rely on  chance, disruption, destruction and chaos, new possibilities are created for each image … this process relates to my interest in Foucault’s writings. Most often the paint’s visceral and autonomous qualities battle for supremacy over the subject; yet only when the two find that illusive harmony, a new and more real truth can emerge,  a symbiotic union, and as if by chance a painting will seem complete. There can never be a predicted  outcome when deliberate, controlled disruption is employed. At times only nothing remains! The image is the foundation or the inherent structure which allows for the paint and myself to explore a million possibilities. Some images are repeated just to see how many ways the painting process will affect them.

Each project is about discovering what the paint can do for me, this keeps my relationship with paint very alive. Sometimes it seems it is the paint that dictates, one must remain in a state of aware unawareness to make the most of the fleeting moments of inspiration. The paint is always trying to tell me something.  At times it would appear that mistakes are the mother of invention.

Research leads me to collect numerous images from  history books, art books, magazines, the net, drawings and photos. These are appropriated and then used  as a ‘coat hanger’, i.e. a structure on which to hang a new interpretation or new combination of signifiers. My work often refers to history and my research into it. Inspiration also comes from novels and philosophy: Therefore meaning in my work is always latently inherent, and is mostly linked to my historical and philosophical research into ideas of other, loss and identity as an existentialist concern .

[1] Rhizome;  a thick underground horizontal stem that produces roots and has shoots that develop into new plants.

6 – KAVITA SAGAR is a London-based very painterly painter from Rajasthan, her work is alive with colourful energy, her first appearance at Cultivate, as part of our recent “Spring” group show gained Javita lots of positive attention. Kavita Sagar has extensively exhibited in India

“Painting is a meditative language for me to release my inner most desires and the upheavals of my personal life. My work explores the boundaries between distortion and realism and seek to reveals the complex relationship between dreams and visualization.

There is no set pattern I follow in my paintings, my moods and present situation will motivate me on the path of creation. I like to paint on canvas because of its raw texture. I use oil and acrylic paints for their quick effects, as this helps me to co-relate my thoughts on my piece of art. I like to paint with painting knives as it gives a relief effect on the subject of my paintings.

My paintings are based on human distortion which portray the physiological upheaval in a human body, mind and soul. The inspiration for my work comes from observing body languages and the personal upheavals that I have faced in my life. Having traveled and lived in different countries and spent time with people from various cultures has had an influence on my work, although the greatest influence comes from my birth place of Rajasthan in India. The pain, suffering, frustrations, fear, complexes, upheavals, distortion, depression are universal which I depict in my paintings.

Coming from a small town in India, having a male dominated society, my thoughts and feelings were suppressed which showed in my paintings in terms of the colors, subjects and techniques. Over time, experience and the exposure of traveling abroad, the small town mindset exploded and made me more independent, freer, experimentative and bolder to express my thoughts in my paintings”.

7 – EMMA HARVEY  is a London-based painter who works primarily in oils; she also produces mixed media works. Her very personal work focuses on themes of sexuality and the place of women in contemporary society. Emma’s paintings are very personal explorations, journeys, observations that have to almost be coaxed out of her studio and on to gallery walls. This results in a questioning of self (and herself) as woman in contemporary society; seen, unseen and being seen.

Emma has shown at various group exhibitions from 2009 to present; most recently curated the ‘YEASTIE GIRLS‘ group show at CULTIVATE VYNER STREET gallery (21st Feb-5th Mar 2013) which re-visited the ethos of ‘Riot Grrrl’, its aim was to bring together today’s riot grrrl inspired creativity; art, music, writing, zines……. Questioning whether anything has changed in the last 20s years and what form Riot Grrrl creativity would take in 2013. Over twenty-seven artists from different disciplines took part and you can read the follow up article written after the show here. 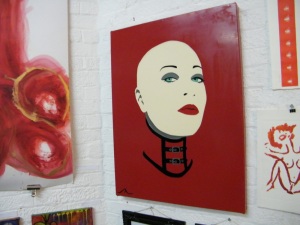 8 – MICHELLE MILDENHALL is a UK based latex artist. She creates unique and dramatic art combining striking imagery with her passion for latex in a new and innovative way.

Having trained in the area of textiles and surface pattern and having had a fetish for latex for many years, she had the idea of combining the two to create something truly unique in both the art and fetish world.

“The idea came in a flash of inspiration while I was working on a latex outfit for myself. Visually it’s such a beautiful material it really deserves to be looked at and admired”

Every art work is designed and individually crafted by Michelle using high quality latex. Her  work is available as signed originals and limited edition prints will be available soon. She takes on commissions and provides a highly individual portrait service working closely with her clients to create something that both client and artist can feel passionate about.

Michelle has carved a unique niche with her art which not only appeals to art lovers but to a new audience of latex lovers as well as the more serious latex connoisseurs bringing the material firmly out of the fashion/fetish industry and into interiors/art spaces.

The majority of her work can be viewed on her website and updates can be found on her facebook page. 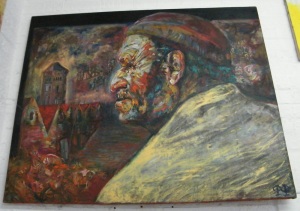 9 – PHILIP FIRSOV – Born in Moscow in the family of two Russian composers Elena Firsova and Dmitri Smirnov, he left Russia in the age of 6. The family settled in England. From the age of 15 he studied art privately with Russian Artist and Restorer Alexander Kolesnik, and then continued his education in Central Saint Martins College of Art and Design, Foundation, Slade School of Fine Art, BA in Fine Art, and Prince’s Drawing School, Post Graduate Scheme.

“Russian born Philip Firsov is an inventive painter and sculptor who is able to transform art-historical sources — ranging from constructivism to Velázquez — into narratives of his own making referencing just as vividly today’s jumbled information overload; his latest work “The Couple”, theatrical, lavish in detail and execution, points to a new assurance.” Jackie Wullschlager. Critic’s choice Review in “Financial Times“. Life & Arts, 15. 18 February 2012.

10 – STEVEN RAWLINGS  – Steven is interested in the instability of subjectivity and the ensuing human desire to seek harmony and order;  his artistic process reflects these concerns –  incorporating improvised sculptural experiments with materials that offer very little control, the products of which are then recombined/composed to produce the visual material for highly organised but often discordant oil paintings.