Things ? More things? Along like London buses, no time these days, drill your own hole, fall through the trapdoor and a whole load of nosedive karma. Can? Well can we? Someone call  The Janitors, we need to tidy things up around here, living like dogs, so much for teenage angst.

The artist known as TRXTR, in his second solo show at Signal Gallery finds himself looking at a world gone mad with excess. For him the problem is that ‘in every way the Genie is out of the bottle and has become so bloated and addictive there is no way it will go back and our wishes are all used up’,

Dystopia’ A solo show by the artist known as TRXTR 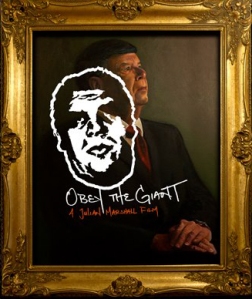 OBEY THE GIANT, directed by Julian Marshall, is the first narrative film about the early life of Shepard Fairey and the origin of his OBEY GIANT street art campaign.

Based on the true story of Shepard Fairey’s first act of street art, OBEY THE GIANT tells the story of a young skate punk challenging a big-city mayor and the powers-that-be at art school.

Frustrated by his inability to gain respect within the confines of art school Shepard sets out to gain notoriety and acclaim by targeting the most powerful man in Providence, former Mayor Buddy Cianci. Risking expulsion and jail time Shepard plasters Andre the Giant’s face over the image of Cianci on a campaign billboard. As word of Shepard’s prank gets out, Shepard learns that art is a weapon and attention is both a blessing and a curse.