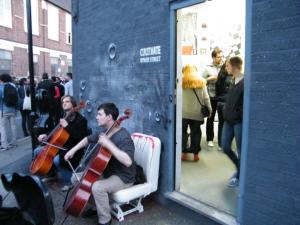 twenty-nine and counting, this Thursday February 6th will be the 30th First Thursday event in a row at Cultivate.   Cultivate Evolved (as the gallery is now known), is an artist-run space right in the middle of the East London thing that is Vyner Street.

Vyner Street, an industrial  cobble-stoned East London street with an ever-changing selection of galleries, performance places and creative art spaces both big and small (Limewharf’s take over of the abandoned Fred space is adding a new spark to the street right now, check out their alternative Winter olympic opening party this Friday for instance, as well as their excellent new cafe come performance space next to the beautifully un-gentrified grime of the Victory pub) .

First Thursday is an event originally fostered, a few years back now, by Whitechapel Gallery, an event that was originally dreamed up in an attempt to unite the many many East London galleries that come and go – an event that has now organically grown in many directions, a monthly event that, rather than exist under the umbrella of one rather establishment old school gallery, has evolved and established a life all of its own (a look at the official Whitechappel First Thursday last month would have informed you that First Thursday does not “officially” happen in January, a walk down Vyner Street on the evening of Thursday January 2nd 2014 would have revealed that First Thursday was indeed happening in January) . True, you’ll find most of the more conventional by-the-book events and the more formal galleries listed on the official First Thursday site, most of the more left-field spaces, places like the rather maverick crowd-pleasing Wayward space in Mowlem Street for instance, or Pure Evil over in Leonard Street, places that are a little more spontaneous and tend not to bother with six months of advance formal artists statements and all that ‘proper’ formal (tedious?) gallery stuff, places like that are not, in general, acknowledged by First Thursday officialdom, and tend not to be ‘officially” listed,  And as good as it is to be able to explore the bigger more formal spaces, the Waywards, Pure Evils and such, the artist-run spaces and  spontaneous places are where you’ll find the real spirit of an East London First Thursday.. .

First Thursday happens, as you’d expect it would, the clue is in the name,on the first Thursday evening of every month.

This Thursday evening will be the 30th First Thursday at the artist-run space that is Cultivate and the thumbnail images bellow are a small selection of the art, people and happenings that have taken place on the Cultivate corner down in the middle of the Vyner Street , London E2, over the last twenty-nine First Thursdays.  First Thursday officially happened between 6pm and 9pm, unofficially it tends to go on just a little bit later….    Entry is free, bring your own refreshment….

One thought on “ORGAN THING – Twenty-nine not out, twenty-nine First Thursdays at Cultivate”