This just in from London’s CAFE OTO

“We’re thrilled to welcome Yoko Ono back to Cafe OTO for two very special performances – A trio with Thurston Moore and Steve Shelley next Saturday (22 March) and an NYC-style late night set the following Tuesday (25 March) with Nels Cline and Talvin Singh.

Obviously, this is an incredibly rare opportunity to see one of the most important figures of the twentieth century avant-garde/counter-culture in such an intimate setting.

The ticket links below will be added to our website later today, but we wanted to give email subscribers some advance warning as these are likely to go pretty fast”. 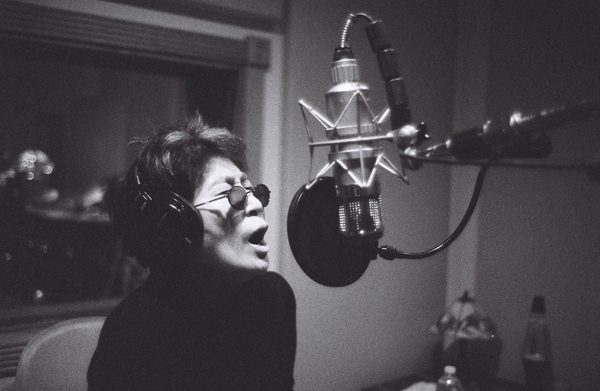 One of the most daring artists of our time, Yoko Ono celebrated her 80th birthday curating Meltdown Festival in London last summer. Her retrospective Half-A-Wind show is touring to major museums in Europe, opening this week at the Guggenheim Bilbao. In 2013, she released the album Take Me To The Land Of Hell by Yoko Ono Plastic Ono Band and the improvised YokoKimThurston 3LP box on Chimera Music. Ono recently published Acorns, a sequel to her 1964 instruction book Grapefruit and she remains extremely busy as an artist, musician and activist at age 81.

Thurston Moore moved to NYC at 18 in 1976 to play punk. He started Sonic Youth in1980. He has worked collaboratively with Yoko Ono, Merce Cunningham, Cecil Taylor, Rhys Chatham, Lydia Lunch, John Zorn, Takehisa Kosugi and Glenn Branca. He has composed music for films by Olivier Assayas, Gus Van Sant, and Allison Anders. He presently records and tours both solo, with various ensembles and with his own band. His most recent recording is to be released by Matador Records September

Guitar explorer Nels Cline is best known these days as the lead guitarist in the band Wilco. His recording and performing career – spanning jazz, rock, punk, and experimental – is well into its fourth decade, with over 160 recordings, including at least 30 for which he is leader. Born in Los Angeles in 1956, Cline has received many accolades including Rolling Stone anointing him as both one of 20 “new guitar gods” and one of the top 100 guitarists of all time.

Percussionist, Producer and Composer, Talvin Singh, is best known for creating the bridge between Indian and electronic music and has taken the Tabla to the cutting edge with the most unimaginable sonic creations. His debut album ‘OK’ achieved huge acclaim and won Singh the Mercury Music Prize in 1999. He has also been honoured with the South Bank Prize for popular music and has worked and collaborated with a diverse range of artists including Sun Ra, Ustad Sultan Khan, Terry Riley, John Martyn and Madonna. He continues to be as explorative and imaginative in his solo career as well as curating new ventures in contemporary music