Hhot shoe, burning down the avenue, have you seen junior’s grades? Things, some quick things today,  no time for Things, got cultivating and things to do innit….

Soundgarden,  you’ve got to love a bit of Soundgarden on a Thursday haven’t yer? ‘course you ‘ave! Soundgarden are kicking out some Superunknown style 20th Anniversary edition action any moment now, and with it a bag loads of demos and vinyl things with interesting b-sides and such, including this original sketch book demo type version of Black Hole Sun that;s they just officially posted up

Diamond Version have announced details of their debut album release, CI, out on Mute on 2 June 2014. The first single from the album features Neil Tennant from Pet Shop Boys and is a collaborative take on the old gospel hymn, ‘Were You There?’: 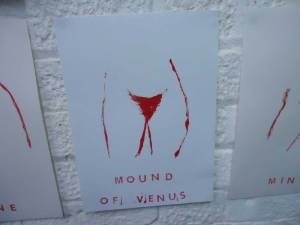 Here comes the record label hype – “Diamond Version’s debut album pairs blistering electronic rhythms, deconstructed techno and dread static with clipped slogans borrowed from advertising and marketing, in both lyrics and track titles such as ‘Science For A Better Life‘, ‘Access To Excellence‘ and ‘Raising The Bar‘.

CI (which stands for Corporate Identity), follows on from a series of five 12″ singles released through Mute, and is the culmination of nearly three years of hard work which began when Raster-Noton and Mute both curated the 2011 Short Circuit Festival of electronic music at the Roundhouse in Camden, London. “It started with the Roundhouse,” recall Diamond Version. “Daniel [Miller, Mute founder] has always been interested in what we do. We shared ideas and experiences, and then it was very clear that we should do something together.”

A Ben Fenton painting, sold at Cultivate this morning…

This is the collaborative project between two of the most groundbreaking, experimental and visionary creators in modern music and, although Olaf Bender and Carsten Nicolai have worked closely together since founding Raster-Noton in 1996, it wasn’t until they formed Diamond Version that they started working together as a duo.

For the debut album, Diamond Version came up with an unusual list of possible vocal collaborators. “We tried to find unpredictable vocalist collaborations – something that you would not think of in the first place, so it didn’t feel streamlined. We wanted to break a certain kind of logic.”. As well as Neil Tennant of Pet Shops Boys, guest vocalists on the album include musician and poet Leslie Winer and Kyoka – a Raster-Noton recording artist

After a triumphant return to Sonar last year (documented by The Creators Project here), a series of dates with Depeche Mode, and a headline show at London’s Village Underground Diamond Version debut their audio-visual live performance on a series of dates, with more to be added – Full details 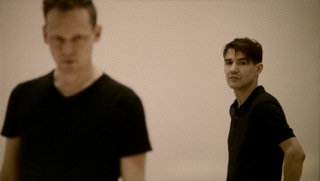 And well, we though posting up Nailed Up For Nothing ahead of the egg eating holidays would be just a step to far even for us….

BEN FENTON at Cultivate as part of the red wall