THING OF THE DAY? A parish notice Mr Drake (and what;s the colour of the notice? “Yellow”), William D Drake (sometimes we call him Bill) has a gig next week….This in from the representatives of Mr William D.Drake 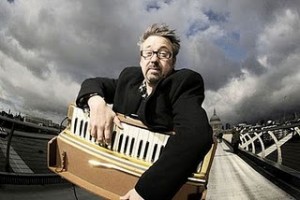 “Mr William D.Drake and his full band will be performing songs from the sumptuous ‘The Rising of the Lights’ album with a sprinkling of favourite tunes from the other albums. By popular request, Mr Drake has promised a rousing rendition of ‘Serendipity Doodah’ . Be sure to arrive in time for a performance by Stars in Battledress”.

Kind of like this, “will you share it please?” they asked, why not, Orchestral manoeuvres indeed. Here’s some Johnny Parry

An Anthology Of All Things is out on the 19th May on Lost Toys Records,  here;s the (lazily) cut ‘n paster record company PR blurb (hey, I haven;t got time for writing reviews, this Organ long since stopped being a serious thing, read the blurb, watch the videos, go explore should you wish……..

‘An Anthology of All Things’ is a project that is as ambitious as it is unconventional. It’s magnificent, masterful and sweepingly heart-warming and performs a velvety emotional cut and paste approach. It dares to be huge and expansive but retains a deeply personal core which carries the intimate, often evocative thoughts and statements that are at times uncomfortable, innocent, whimsical and on occasions playfully risqué.

It is an engaging piece of music that glides through varying emotions whilst drawing in a wide spectrum of human experiences from the local community. This Saxon town in the East of England provided the lyrical inspiration for the eight movements on the album; each movement has its own theme ranging from self appreciation to memories, romance and youthful boundary defiance.

The concept was brought together through a commission by the Bedford Creative Arts which gave him the opportunity to engage with the local residents and thus forming the Bedford Arts Choir for a monumental performance of the work in 2012.

All lyrics were donations from the public; these unique responses were collated and pieced together with the rich and emotive sound of the Johnny Parry Chamber Orchestra which darts from feelings of desolation, joyousness and commanding dramatic surges. Movement I – Things I Like About Myself playfully joins the dots from the happiness of the physical body shape and stature to a blessed voice and the always impressive ability to touch your nose with your tongue – this sets the scene and tone for the direction the album decides to go in.

Movement II – A Song For Someone consists of individual lines taken from local musicians and poets which mention people’s names. Taking inspiration from local schools and playgroups Movement III – Childhood Heroes is a surreal and entertaining journey through an imagination with no limitations which starkly contrasts to the sometimes harrowing Movement IV – 1942 which collects memories from the year 1942; rationing, bombs, fire and cake create a very vivid mental picture of a previous lifetime.

Movement V – Park Benches is both novel and touching and is based around dedications found on park benches dotted around beauty spots and parks. From the poetic to the cliché and the bizarre to the racy, all of these make up the endearing Movement VI – Romantic Statement.; Did it hurt when you fell from heaven? I’m The Emu, you are my Hull! I miss you like the ground! How do you like your eggs in the morning? All make up this wonderfully warm 9 minute epic.

Movement VII – Enduring Memories From A Film deals with the recollections to those enduring bite sized incidents from film – removing characters and specifics and only leaving the moment to describe and finally Movement VIII – Pilgrimage. This reduces down to the mundane basics of travelling to purely the beginning, the destination and the mode of transport which results in a powerfully epic finale to the record.

And while we’re here today, a touch of Magma in celebration of artist HR GIGER who passed away today