ORGAN PREVIEW: The 6th annual Hackney WickED Arts Festival is almost upon us…

“What people don’t realise about the Hackney WickED Art Festival is the honesty of the  festival; it is made from the energy of the artists…  It really is quite different to any other festivals that people will have gone to” so says festival  patron, Gavin Turk
.

.
At 6pm on Friday 1st August, Hackney WickED throws opens its warehouse doors to present cutting edge exhibitions   from some of London’s most extraordinary galleries and a plethora of artists’ open studios.
.

For the sixth time in seven years, WickED is on (didn’t happen in Olympic year for obvious reasons), and this year “the festival hopes to be bigger than ever, especially in light of Arts Council funding granted for the first time”
.
You’ve got all kinds of things going on in all kinds of strange corners and yards and formal galleries and spaces handed over to artistic endeavour for the weekend, you’ve got music, food, street art, contemporary art, contemporary street art, film, “Hackney WickED Art Festival, in its 6th year, has established itself as one of London’s biggest and certainly most uniquely creative art events: promoting local culture and providing a platform for emerging artists to showcase their work alongside more established names whilst celebrating the creative community that resides in Hackney Wick. The vital thing about Hackney WickED  is that it feel like it is the artists and creative people setting the agenda, the makers in organic control, people excited to be doing things, to be painting, sculpting, engaging  – a real celebration of real people and real culture, of art being accessible, studios open, things alive.

.
.
Far too much going on to even begin to list it all, hundreds of artists,m events, galleries, exhibitions, music, food. people, all concentrated together celebrating creativity and supporting a community, smiling – “This year the festival epicentre is Hackney WickED Ribiera, based at Forman’s Fish Island and Swan Wharf, where art will be celebrated in all its  forms.  Key elements include curated  exhibitions,  open studios, performance, film,  site-specific art,  Fate For The WickED (art  market),  graffiti jam,  development workshops,  fashion, music, art tours, kayak trips and over one hundred open studios to  explore; fifteen or more exhibitions curated specially for the festival, many many live performances and events popping up around the streets and venues of Hackney Wick”, I think you might be getting the idea by now, a positive art overload and artists of all shapes and sizes just doing it…..
.
Lots more vital information, imagery and the whys and wheres and how you find things and more more more over there via www.hackneywicked.co.uk
.

Meanwhile over here, we’re busy cultivating the next One Hundred Pieced Piece, well I am…
. 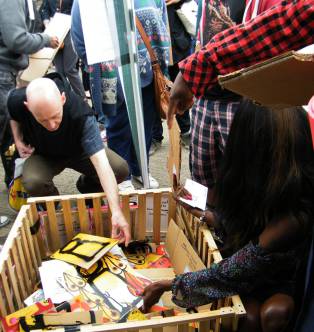 And that seemed like a healthy place to leave the notions of a piece of work shared between a hundred different people. The three works achieved most of what I wanted, simple uncomplicated art making use of unwanted discarded material reclaimed from the street, art that anyone  can enjoy a slice of, it explains itself doesn’t it? Until a pile of vinyl was found, most of it beyond playing, all scratched and piled up by a bin at the back of the charity shop. All one hundred pieces of vinyl painted at the same time

The fifth One Hundred Pieced Piece will be released during this year’s HACKNEY WickED festival weekend at the start of August. The piece will consist of one hundred found objects, objects found discarded and unwanted on the Hackney/Wick streets, canal banks and such.  items found over the summer – packing cases, pieces of textured weathered wood, doors, old signs, other people’s art – paintings thrown in skips, things brought in to Cultivate, canvases left in the Vyner Street bins by other galleries, paint cans, radiators, cardboard.  The pieces will all be painted on, added to, labelled as free art, numbered, and left around Hackney Wick during the festival for people to take away.  (and, yes, anything left at the end will be collected up and evolved in to something else, this is about recycling unwanted resources ) 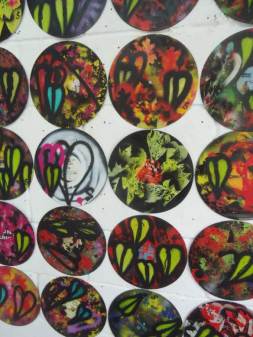 The process will once again be documented as it evolves via the various social media platforms we all know and love – Twitter, Facebook and such, the piece and the pieces is/are being worked on now at Cultivate, some of it is on the wall (some of it is on exhibition right now in Fulham at the Big Mix 6 show at the Loud And Western building.    The hundred pieces will be left around the week ahead of an during the festival that happens over the weekend of August 1st to the 3rd, some will slip in to your pocket or bag, some under your arm, some on the back of your truck or your canal barge or with the help of a friend….

Work in progress on the FIFTH ONE HUNDRED PIECED PIECE and paintings on one hundred things found in and around Hackney, all to be left out around the streets of the Hackney WickEd art festival next weekend

.
See you over the weekend Lots more on the official WickED website
.