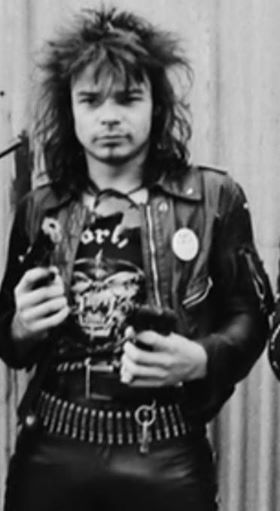 For me it was always about the three of them, they were my band, even now I still think of Phil Campbell as the new guy. It wasn’t just about Lemmy, of course he was larger than life, but so was Fast Eddie, the two of them up there side-by-side, under the bomber, gunslingers, massive. They were my band, the band I followed, the band that really mattered, and behind it all, just as large as two up front and and twice as loud, one of the most underrated drummers out there, holding it all down, a powerhouse, an animal, The Animal.

I loved Motorhead back there – Overkill, Bomber, the ultimate band – Bingley Hall, Port Vale, Hammy O, the three of them, the best, no sleep, when’s the next gig? Everything louder than everything else, there is nothing better than the start (and the restart) of Overkill .

Sad news today then, The Animal is no more, Philthy Animal Taylor has passed away….

“My dear friend and brother passed away last night.  He had been ill for sometime but that does not make it any easier when the time finally comes. I have known Phil since he was 21 and he was one hell of a character. Fortunately we made some fantastic music together and I have many many fond memories of our time together. Rest in Peace, Phil!” Said Fast Eddie Clark via social media

Former Motorhead drummer Phil “Philthy Animal” Taylor died yesterday, Wednesday (Nov. 11), He was 61, he made one hell of a righteous noise. Thanks Phil. .  (sw)
.
.