Dan Baldwin has a new show opening over at Maddox Gallery (Mayfair, London W1), opening night is October 4th, the show is called Under The Influence, no doubt the gallery walls will be alive with Dan’s vivid colour once more, we’ll leave you with this little taster and some blatantly cut’n paste style words from the gallery themselves while we get on with the business of debasing some more, this is a non-stop operation, but unlike the man in the red hat, we will always make the time, art excites us, going out and exploring art excites us, not for us the option of sitting at home posting photos in a silly red hat and telling people “I don’t care”. Rather looking forward to this latest Dan Baldwin show…. 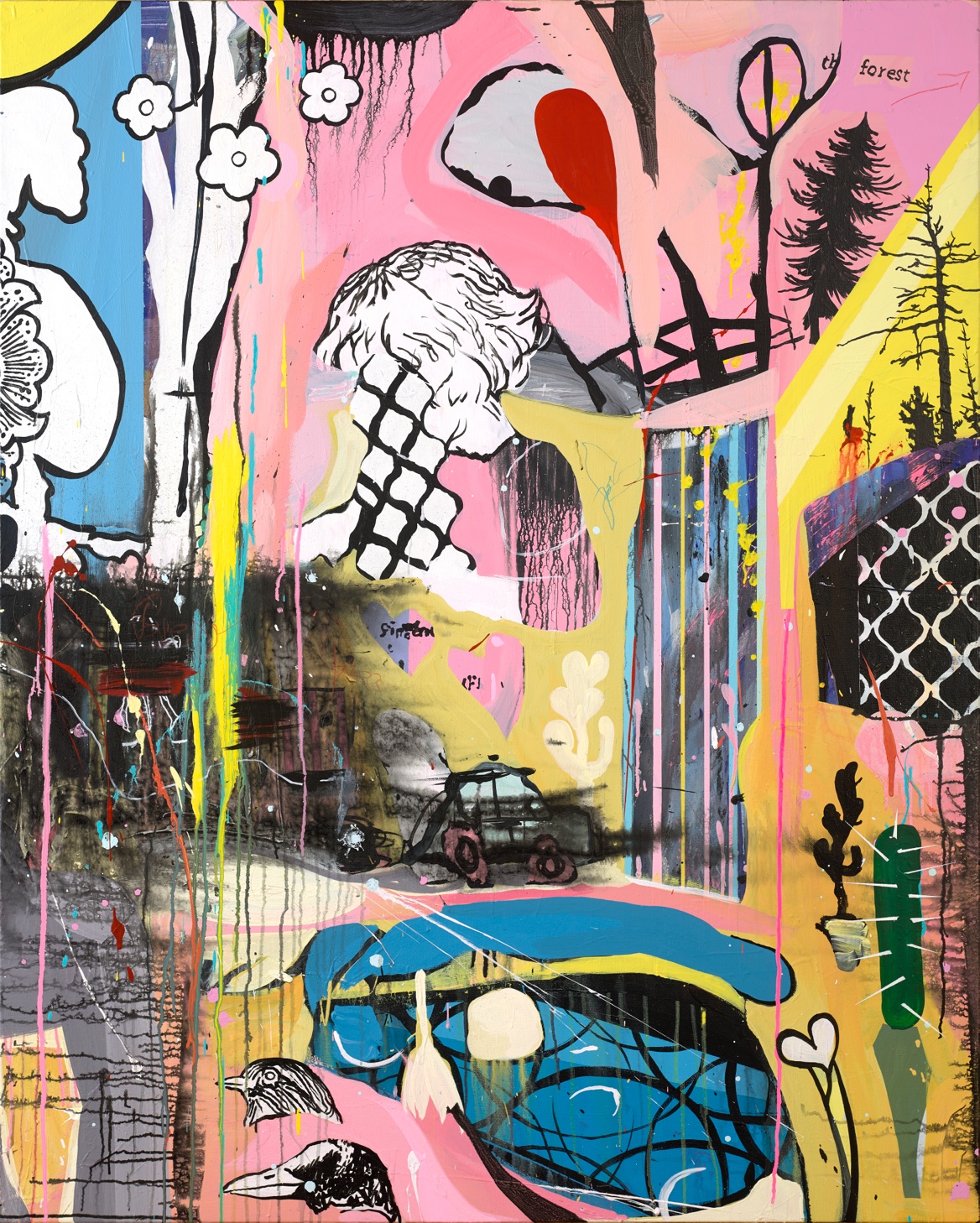 “Maddox Gallery, Mayfair, is pleased to present UNDER THE INFLUENCE, the gallery’s first solo exhibition of paintings from respected British artist Dan Baldwin. The October exhibition will see the contemporary painter unveil a new body of work as he reflects upon his last decade as an artist.

UNDER THE INFLUENCE is Baldwin’s fifteenth solo show. A contemplation of the last ten years of his life, this exciting new body of work looks towards the future with a fresh new perspective, as well as assessing his work and its themes over the last decade.

Through his combination of mixed media, Baldwin presents provocative images merging political, religious and cultural motifs in a playful and vibrant palette. His work is layered both thematically and physically, using an array of carefully selected found objects, glazes and acrylics. Though this exhibition focuses on Baldwin’s painting, there is a depth and uneasiness in the opposite forces at play throughout all of Baldwin’s work, and it is this juxtaposition of playful and dark imagery in his unique style, which makes his work so difficult to place. Widely sought after, Baldwin’s inimitable work has the ability to both provoke and bemuse his audience. 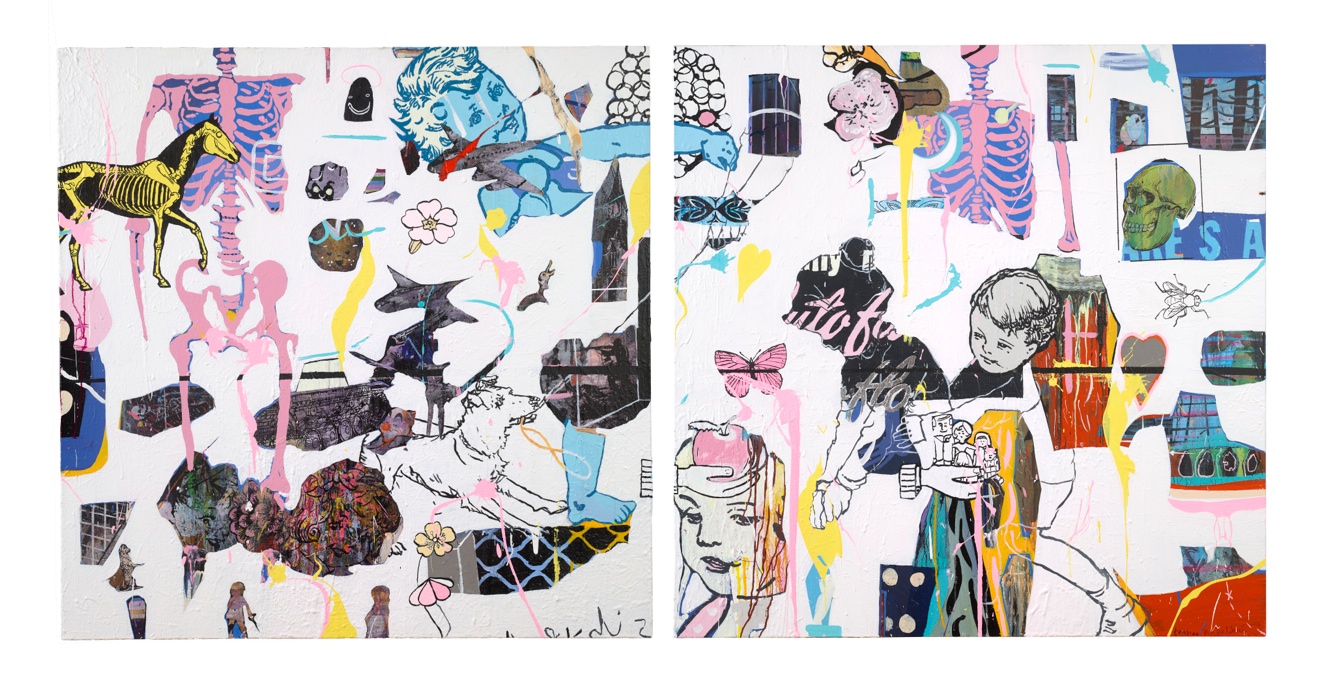 Dan Baldwin comments, “I don’t plan paintings, everyday new thoughts and influences enter my studio through the media and I surround myself with resource material, a resource formed of thousands of images and objects collected over the past 25 years. I begin to paint, layering and over painting eliminating what isn’t working, and keeping what does. Works can often take months sometimes even years to complete. There is no grand plan or vision in my mind, I work until it’s right. Each finished work is an expression of the many paintings that live below the surface overpainted until I feel it is complete. Harmony and balance are vital, a perfect tension between my suggestive themes and symbols of life, death, memory, love, conflict and nostalgia.”

Baldwin adds, “This new body of work contrasts sharply from the dark musings that featured in my previous show FEAR OF LETTING GO, influenced by trips to Los Angeles and Majorca these paintings celebrate the sunshine and colour I witnessed and craved. Interwoven with the language of past paintings and a new found nostalgia these works represent a new chapter for me and one that I hope engages and invites a dialogue with the viewer.”

“Looking at Dan’s work is like meeting old friends for me. It looks as though at some point in our careers we used the same casting agency. I am flattered that Dan writes that he was influenced by my work. It’s fascinating to see Mickey and all the chaps used in a newer different way, and I have really enjoyed his work.” Sir Peter Blake

Born in Manchester in 1972, Dan initially studied at Eastbourne College of Art before completing a BA in Illustration from the Kent Institute of Art. He has since gone on to become one of the most prominent artists working in the UK today, with his multi- dimensional and ethereal work found in prominent international collections and institutions around the world. Previously citing Damien Hirst, Gilbert & George and Peter Blake as his key influences, it is these same artists who collect Baldwin’s work and now credit him as a key artist and influencer of his generation.

The Private View is on Tuesday 4th October 2016, 6-9pm , the exhibition runs from the 5th to the 25th October at  Maddox Gallery, 9 Maddox Street London W1S 2QE