Cacotopia 03 Week Two, Rui Lin at Annka Kultys Gallery, Hackney Road, East London, December 2018 – Week one was bright, week one of this year’s Cacotopia was exciting, it was striking, it was electric, I went three times, it got better every time, there’s no way week two was going to follow it, video installation in a gallery was the rumour for the second week, let’s be honest here, video installation never really serious excites in a gallery, it doesn’t often connect, not video in a gallery, it often infringes, not always, now and again a piece of video really does impact in a gallery, a rare thing though, that Megan Pickering Aylesbury Estate piece we had in Play that time jumps to mind,, but video in a gallery? Nah, it just doesn’t work, no one takes the time to watch videos in a gallery when there’s paintings to look at, sculptures to walk around. Surely week two on Cacotopia 03 wasn’t going to be anywhere near as exciting as week one and the buzz of those very bright Martin Nemes pieces? 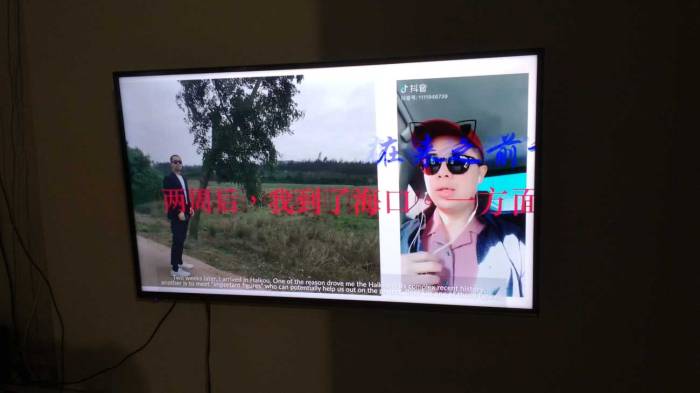 Now the important thing about the gallery in terms of week two is the fact that the gallery is up some very white concrete stairs, a very bright white very well lit space above a shop on the Hackney Road, this is important in terms of week two and Rui Lin because the first thing that gets you is the sound – the sound hits you as soon as the door to the gallery is opened, nothing overwhelming, nothing that difficult or awkward, the sound isn’t attacking you, it just sounds really (really) intriguing from the foot of the stairs, it sounds brilliant actually, and by the time you get up the gallery and see the show for the first time the sound has already got you, way before you see anything the sound has you, brilliant, love it already.. 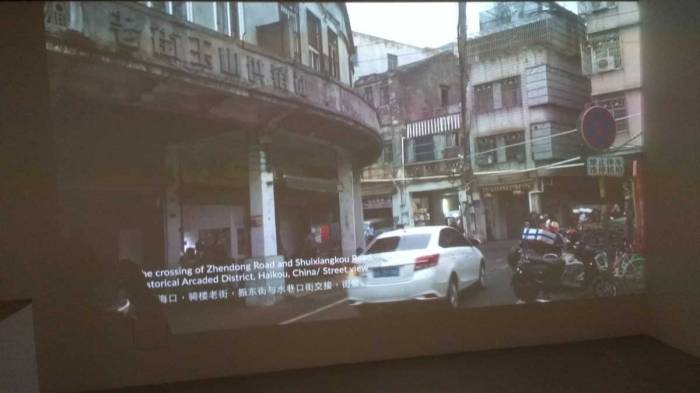 You have one wall at the end of the gallery that demands your attention straight away, the sound relates to that wall and what appears to be a live broadcast of a street corner of a city in China – I assume it to be a backstreet – actually it feels a little like a busy street corner somewhere near Ridley Road over here in Dalston (East London), the sound is so good that you are immediately pulled in to the act of watching – and once you get your bearings you just can’t stop watching the people rushing by, watching the people on scooters and the motorbikes rushing by, the people walking by phones to ears, cars trying to get through the crowded street – it isn’t quite live, apparently if the broadcast was live then the time difference would mean we viewers here in East London on a Thursday afternoon would be watching the street corner in Haikou in the peace and quiet of the early hours of the morning – what we actually get is mid-afternoon real time footage of a street corner in China. apparently filmed last week, broadcast here in the gallery in real time and feeling very much like yes you are watching it live as it happens – and it really is hard to stop watching, I really could have stayed there for hours just listening and watching what in reality wasn’t very much happening other than lot of people going by on that street corner in Haikou – just people going about mundane everyday things, people walking by, riding by, nothing really happening on a busy street corner but so so compelling, so addictive, such good art – it surely wouldn’t work on a small screen, it wouldn’t work on your computer screen at home, it needs the formal feel of a gallery, it needs that perfect sound quality to go with the reverence that comes with the act of viewing a piece of art on a gallery wall, that permission granted to just stand there and really look at something, it needs that sound coming from all around you, it needs the formality of a white cube gallery, damn this is good! Why am I standing here? Why is is it so hard to pull away, just a couple more minutes….

Beside the very “live” street corner taking up the big wall, there’s actually three other screens in the gallery, two with more “live” footage and a third featuring a fast paced piece the artist has put together that’s alive with frpahics and split screens and Rui Lin shaving and talking and well, it really is that big wall and the sound and how many boxes are balanced on that bike and there goes a Chinese woman carrying a box and a man in a very normal looking blue shirt on his very normal looking phone and another man on a push-bike and a very normal looking car that looks like any other car in any other city and I really can’t stop watching it… as a piece of art on the wall of a gallery this is excellent, why though? Nothing like last week and the first part of Cacotopia 03, as equally rewarding though – someone from the gallery is trying to tell me what’s behind the show, what this week is about, what Rui Lin is actually doing here this week, I’m not really listening though, I too busy watching, I don’t really care what the show is about, I guess I should be but no, sorry, I just want to look at the art on the gallery wall – here, here’s the gist of what the person from the gallery was trying to tell me – 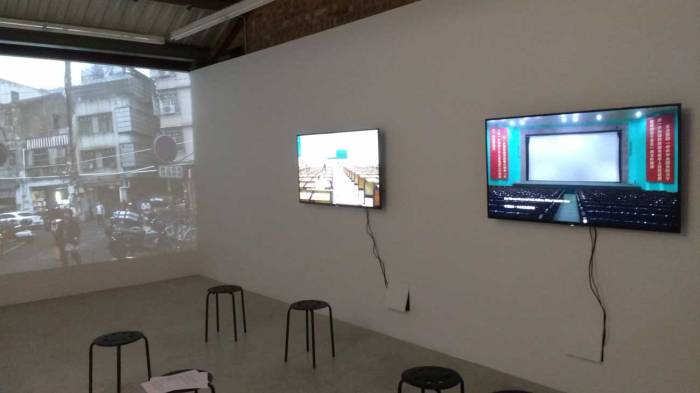 For the show’s second week, Rui Lin will produce a public presentation to showcase the progress and development of his EMFA (Executive Master of Fine Arts) project. Ongoing in nature, EMFA is a collaborative, research-based, pedagogical experiment, part non-profit project, part hyper-reality. The presentation will include a brochure and course curriculum for the EMFA, as well as live-stream into the gallery potential locations that could host the EMFA project in the Chinese city of Haikou, filmed on a steadicam by a local videographer –

– whatever she was telling me, I really wasn’t listening, rude of me, sorry, but it really wasn’t registering, I wasn’t interested, i just wanted to stand in the gallery and watch the art, to listen to the art, I had to get back to work I didn’t want to leave, I want to go back now….

Week two of Cacotopia 03 then, every bit as good as week one, a complete contrast to week one, as rewarding as week one, do try and catch it, the photos here may look rather boring, the show certainly isn’t.  What will week three bring? You have to be quick, you only have a week to catch each one, unfortunately the gallery is closed on Sundays, so you need to be quick to catch week two now, here’s the gallery website link for more information, the photos here tell you very very little, do go see it , (sw).

Week One coverage here –  ORGAN THING: Cacotopia 03 kicks off in style with the exciting lines of Martin Nemes at Annka Kultys Gallery…