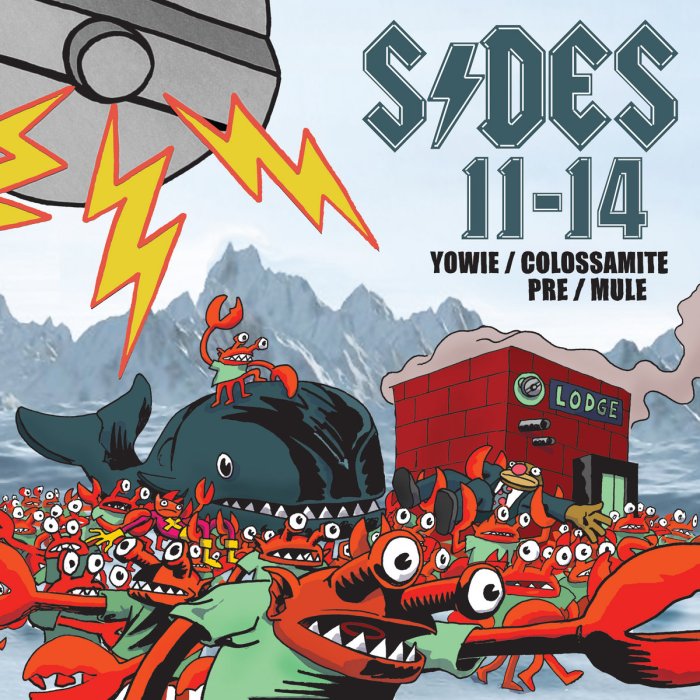 Now we’ve covered these glorious AC/DC seven inchers that SkinGraft put out more than once via these increasingly fractured Organ pages, we covered them in print when they originally came out back in 2008, was it only 2008? It feels like it was way way longer ago, if feels like another world, another time, a way different normal to the normal we’re trying to get back to now, it feels almost as long ago as Bon stomping his way around Liverpool Empire or the first sighting of Beano on the ice at Deeside, he was alright back there in the days of Back in Black (never as good as his Geordie days, we can write about all that in a Play For Today). Actually there was a post about those inspired interpretations again this morning, and as a result this quote from Ed about the Colossamite AC DC track came in… “Would you like to add it to your piece?” said yer man from SkinGraft? Well yes, I mean, all those riffs in the soup of Anti Christ Devil’s Child. And to think there are people out there who haven’t heard these treasures yet, they have yet to here Yowie doing AC/DC or U,S Maple or the mighty Colossamite or that Shellax version of Jailbreak, hell, there might even be people out there who have never heard Powerage at full volume, they still have that to come! Lucky people!, Give me a bullet to bite on…

“One thing that always struck me about AC/DC was their ability to do so much with so little. With slight variation to a theme they kept coming up with these incredible results. True masters of the concept of doing the most with what you have. When we were asked to do the tribute series I listened to a ton of their albums and the riffs all became a swirl of that similar language in my head, so I thought it’d be fun to leave them in that tangle. Our song starts with Rock And Roll Ain’t Noise Pollution over Rising Power over Nervous Shakedown all at once, then into Shake a Leg into Breaking the Rules. John had found this amazing interview with AC/DC where they were talking about their love of Looney Tunes and the voice at the end is Angus Young talking about the Roadrunner…..and the coyote people….coyote people….coyote people…

and here is a quote from Mark Shippy about the U.S. Maple’s jailbreak that you can use if you’d like – “In junior high we had this fire pit way way out in nowhere near these gravel pits, where all these older stoner kids would hang out and blast music from their car stereos. Mostly Bon Scott era (well I think at that time ‘Back in Black’ had just come out?…or maybe it was ‘just’ before that). I think we listened mostly to ‘Let There Be Rock’. We liked listening to all the live rock albums (like Rush “All World’s Stage’, The Who “Live At Leeds’…and there was this Led Zeppelin bootleg ‘For Badge Holder’s Only’ that was really popular at the time, too). Wasn’t there a filmed version of “Let There Be Rock’ that came out later, too? I could swear there was.”

And here, yer again, are the goods in full…

And is there anything better than that perfect start to Down Payment Blues?

SKINGRAFT RECORDS, PROBABLY THE BEST LABEL IN THE WORLD