First Friday of the year, and as you know, Friday is Free Art day around the world.  Over in Detroit Agent Love left another rather good looking sign out, Meanwhile over here in London, more of those very simple pieces of recycled cardboard pieces appeared via Skeleton Cardboard man, who left them at Cultivate, Vyner Street where they found themselves on the window ledge waiting got someone to take them home.  The Free Art Movement is evolving all the time, people joining in all over the planet

As we’ve said before, the idea of Free Art Friday has been around for years in one form or another, the added fuel of social media has turned it from a series of local affairs in to the global network it now is. Artists posting news, people going out hunting. Simple pieces on recycled cardboard, tops of old syrup cans, vinyl records, pieces of cardboard, birds fashioned out of rusty wire found on the southcoast beaches when it comes to Portsmouth’s Los Dave – there’s the piece Los Dave announced he’d left out, via his Twitter feed, this morning…. Meanwhile one of those of those Agent: Love pieces was waiting to be found out the American snow and one of those Leafhearts, painted on a found yellow show box was waiting to be found…. 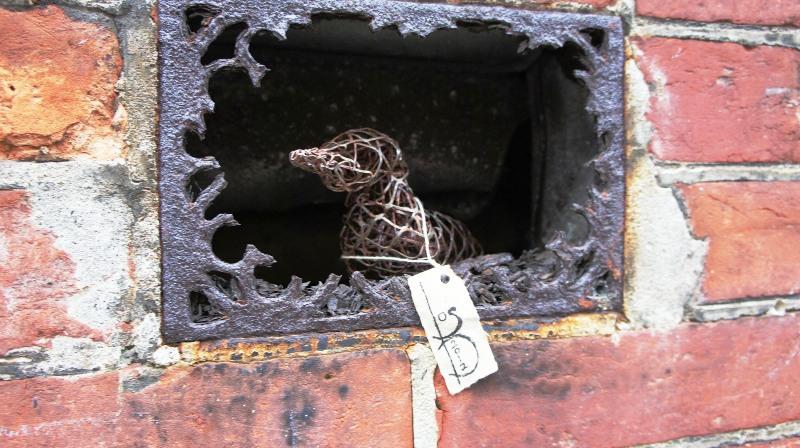 Free Art Friday is usually a very informal thing, it happens pretty much every Friday, there are no rules (although today here in East London the local council has a bit of a moan about the shape of things, officious woman with a nice black clipboard and a Primark trouser suit really didn’t join in with the spirit and did indeed try to impose a rule or two on us down Vyner Streetm exclamation mark time or what!?).  So Free Art Friday, keep your eyes peeled, watch those social networks,  there’s artists announcing things via their Facebook pages and such all the time.  NOAH ZARK has announce an intention to leave 1000 pieces of free art out throughout this year. “I will be creating, documenting and distributing 1000 pieces of free art from January 1st 2013, until December 31st 2013. I hope to spread as much happiness and colour as I can in one year”.

Free Art, it happens most days, it mainly happens on Fridays these days…..