ORGAN THING: Way too busy getting ready to get Yeastie….

We found some Exploding Cinema in the Consultant’s Flower Garden…

“The EXPLODING CINEMA is a coalition of film/video makers committed to developing new modes of exhibition for underground media; from DIY screenings in all kinds of venues to low/no budget film tours, cable T.V. and the internet.It’s TWENTY years since the Exploding Cinema was founded in a stone…. read on

Right now, like I just said, we’re way too up to the top pf our necks in yeast and getting the show up on the walls right now, no time for Organ things today…. 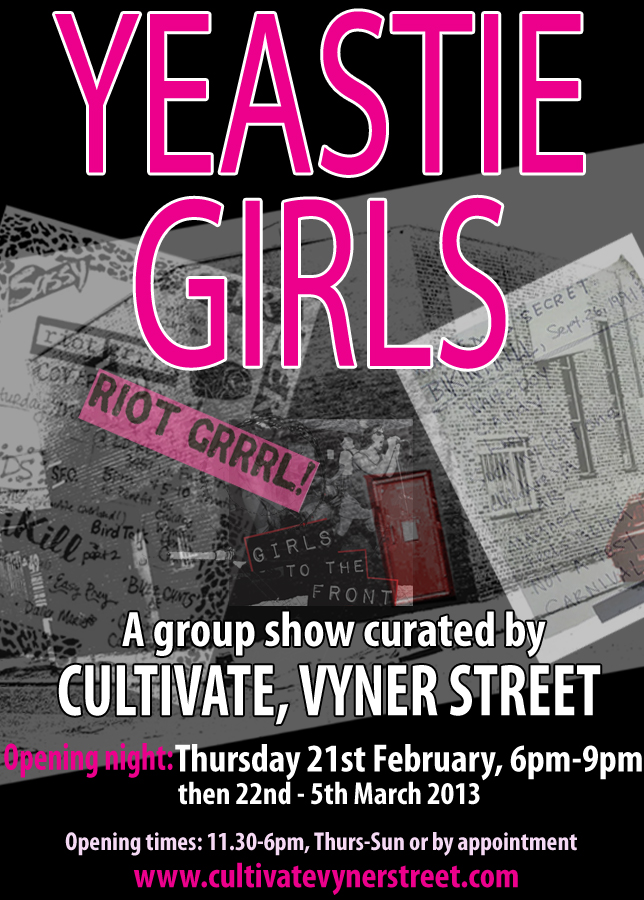 ‘That girl thinks she’s the queen of the neighborhood. I got news for you, she is!’ (Bikini Kill ‘Rebel Girl’)

The show aims to bring together today’s riot grrrl inspired creativity; art, music, writing, zines……. Is riot grrrl still relevant 20 years on? Are women now more empowered and supportive of one another?

The 90s riot grrrl movement allowed women their own creative space to make political statements about the issues they were facing in the male oriented punk rock community, as well as in society; to express their views on issues such as rape, domestic abuse, sexuality, and female empowerment. As Tobi Vail (drummer with Bikini Kill) said, the purpose of the Riot Grrrls was to fight against the things that kept women divided, to start a discourse and to give importance to women and the things that they do.

So, has anything changed in the last 20s years? What issues should we be addressing now? Can we still make our voices heard? What form does Riot Grrrl creativity take in 2013?

We’ve inviting artists to take part, but would love to hear from ARTISTS, MUSICIANS, ZINE MAKERS, ART COLLECTIVES etc. who want to get involved; please CONTACT US with your ideas. All ideas are welcomed…….and no, you don’t have to be female, it’s open to everyone

“We’re not anti-boy, we’re pro-girl” (Molly Neuman, Bratmobile)
And the opening night of 21st coincides with this…

On 21 February 2012, members of the Russian punk band Pussy Riot performed a “punk prayer” in a Moscow church for which they were arrested, detained for several months and eventually sentenced on 17 August 2012 to 2 years imprisonment. With two of the three members remaining imprisoned (Nadezhda “Nadya” Tolokonnikova and Maria “Masha“ Alyokhina)

Here’s some bands and things from back there, thrown together in a rush while we paint walls and glue things, a whole load  of things thrown together for a bit of yeastie flavour….

Throughout 1992 and 1993, sensationalized accounts of the Riot Grrrl phenomenon appeared in publications all over the country, describing a new subculture that had emerged out of the underground punk scene. Despite the intense media interest in Riot Grrrl, little video documentation of this important facet of feminist and pop culture history exists, due in part to a decision by Riot Grrrls to no longer engage with the mainstream media that sensationalized, misrepresented and co-opted them. Filmmaker Abby Moser was granted access to Riot Grrrl NYC, the New York City chapter of this international movement. She interviewed individual members of the group, and documented meetings, rock shows, marches and events. An invaluable historical document, GRRRL LOVE AND REVOLUTION glimpses how the women in Riot Grrrl NYC organized and participated in a movement that revitalized a stagnant alternative rock scene, created safe spaces for women musicians and queer punks, and created a new wave of DIY feminist politics.

For more information about this film, please visit this link

VOODOO QUEENS were one of London’s finest back there…    this is from the 1994 UK video zine documentary “Getting Close to Nothing.”

Mambo Taxi were a London based British band that were linked with Riot Grrrl,who formed in 1991 and split up in 1995

and this is where the name came from

See you at Cultivate…. come join in…