Way off in late November we know, but (the legendary band that is) Henry Cow did say they would never reform and as much as I think most bands should stay retired, Henry Cow playing again has to surely be exciting news (even if the circumstances could have been a little better .) 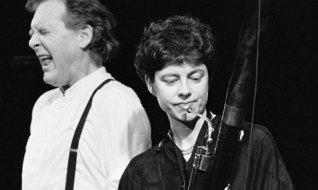 Henry Cow, Music For Films, News From Babel and Oh Moscow play the music of Lindsay Cooper on Friday 21 November at the Barbican, London EC2

To celebrate the life and work of Lindsay Cooper (1951-2013), four legendary bands are coming together from points halfway across the earth to perform Lindsay’s music at the Barbican as part of EFG London Jazz Festival.

​”Lindsay Cooper, in common with most film composers, was poly-stylistic and no respecter of musical convention; less commonly, she also understood performance dynamics and the chemistry of bands. The concert, produced by Serious, offer a unique and never-to-be-repeated opportunity to hear some extraordinary repertoire, as well as to catch these four exceptional and now legendary bands”.

Meanwhile here’s more from the Medway’s rather deliciously abrasive BLACK LIGHT BRIGADE. Some freshly unveiled like in the studio goodness….

And while we’re here, OK GO are back for more…

“After a two year hiatus from creating their visually stimulating music videos, alternative pop band OK Go are finally back with their latest  clip for ‘The Writing’s on the Wall,’ a single from their forthcoming album Hungry Ghosts. The video is 4-minute barrage of optical illusion techniques performed live in-camera (primarily anamorphic projection) that borrow ideas from artists like Bernard Pras, Felice Varini, Bela Borsodi and maybe even a nod to Jay-Z’s Blueprint 3 album cover. All of the scenes are performed one after another in a single take, but probably took untold months of preparation.”