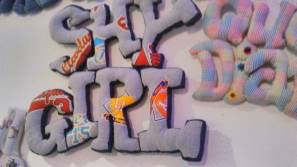 A big show, a bold a show, an ambitious show alive with energy and another example of London artists coming together and making something happen. The main providers of energy this time are artists Danny Pockets and Vanya Balogh, don’t ask us where they’ve managed to beg steel or borrow this vast building from, they did and once again we must thank them. 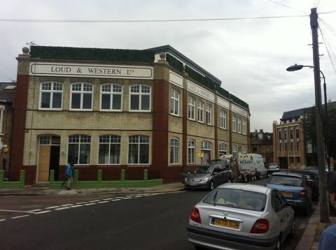 A plush looking conversion work-in-progress of a building over by Imperial Wharf and the river, paint still wet as the workmen refurbish the beautiful looking space (an old 30’s looking ex-laundry of a building that we’re rather pleased to see surviving on one form or another in amongst all this developments that’s making it harder for us artists to survive in this town).

There’s two big rooms of art as well as a number of small spaces, mezzanines, back rooms, side rooms, stairs, big end windows so the summer sunset can join in.  The art and artists are more united by an attitude than anything, a need to just come together and do it, and this is very much about gathering and doing it  – artists doing it themselves rather than waiting for the suits and twin sets running the closed shop white cubes.  Artists united by an energy, a “better Woolworths”, a factual sense.  And that energy is really is all it needs, the rest of it is about you exploring and seeing and finding the art, and there is plenty to explore, plenty to find – a tennis match over there, a fractured  TV screen on that table, packing cases, rusty radiators and concrete slabs dragged off the street, bottles full of musical air, bears that demand you smile, painterly forms, colours, chairs on a wall holding up chairs in frames, words stitched together (love the words stitched together). An ex-tank commander’s comment on a war he fought in, the M25, light box menus, dust.

We got there late, where were we?  Stuck in a train waiting for a fire to burn itself out, the hells of the London Overground system where communication and information is not an option take nseriously, where Oysters are ignored and no one knows where the trains are actually going….  Arrived fashionably late (really didn’t mean to) and missed most of the performance (and the beer)  – Cos Chapman from Rude Mechanicals was doing something in terms of a guitar,  Jeffrey Disasternaut was painting live, opera singers were wandering around the exhibits singing (caught the last bit of that, beautiful as the sun went down). Got there in time to explore the art though –  energy and attitude is all well and good, but that art itself has to do the real walking and talking, there’s good art here, art that does indeed walk it  … 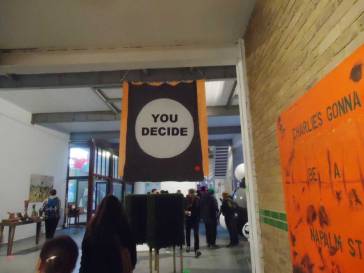 Of course there are favourite pieces,  works that stood out more than others, this is not the time and place to pick out names though – this is about a whole, a body, a coming together, about something happening, about something that  goes on happening, and as the big banner demands as you walk in, you decide.

This latest Big Deal is a triumph, a marvelous mix up of styles, of thought, of ways of seeing and doing and another blossoming of creativity (and I make not one inch of apology for writing this when I am part of the show – I’m excited by it, energised by it, pleased to be part of it, really is great to be a painter surviving and working in London right now in amongst all these mix ups and gathering in car parks and such). London is alive with art, you just got ot go out and find it, it mostly happens at places and events like this, this is where art is really alive, this is exciting, last night excited me       (S.W.)

The Big Deal is at the Loud & Western Building, 59-65 Broughton Road, Fulham, London SW6 2LE.  The show opened in style last night, Thursday evening July 10th and runs from the 11th to 25th July  (open daily from 12pm until 6pm)

The show features, in the curator’s own words, the following “Marvelous artists”

A whole bag load of photos from the opening, click on one to enlarge or run as a slide show