Whoooo, not now then, where’s the plot? This book has no plot, Steve Hackett is 65, are thing going off and things? Are we in a little bit of a panic sphere? Wherever we are, have a taste of this, the new Eat Your Leaders EP, from self-proclaimed New York art-punk troupe The Strange Times

.
“Since December 2012, The Strange Times have been crafting an eclectic style of punk rock, which is noted for its urgent social critiques, poignant political satires, and occasional string arrangements. In January 2014, the NYC-based band released their debut EP, I Love Cops, which was followed by the release of a single and two music videos, touring on the U.S east coast, and an appearance at Punk Island and the CBGB Music Festival”.

There’s an interview with The Strange Times to be found on line via California music zine New Noise. 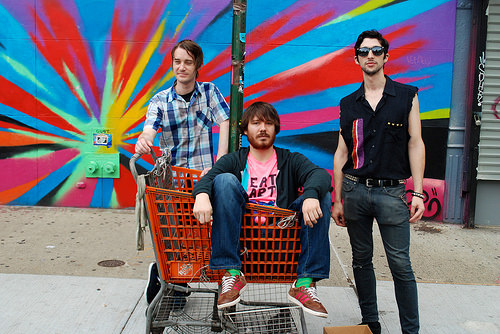 Now we really hadn’t bothered taken any notice of Gaz Coombes and what he’s doing these days, he of one time brit pop band Supergrass, they never got us in a buzz in the back of no bus, and far be it for us to mention Radiohead, hey, it caught passing ears around here, here it is, caught by the buzz indeed….

So anyway, was there a plot? Nah, there never was, just a stream of unconscious muttering about music and art and cut ‘n paste Pritt stick and fractured photocopiers, bad attitudes, kicking against the pricks and something about something mattering for some reason.  And I read in an interview with a Cardiacs member in another zine once how if hadn’t been for Organ they probably would have packed it all in, something like that. So anyway Steve Hackett becomes a pensioner today, and if there was a plot no one ever told me. I also read on a Cardiacs fan forum once that I really didn’t care that much about Cardiacs and I was only in it for the money, yeah, right, that was a surefire get rich quick scheme!

There will now be a short break and a word from our sponsors, see you on the otherside of this quick ad break

KAYODOT and BOTANIST are on the way over for a European tour, booking dates right now, a whole load of avant-metal buzzing in the back of a van, they have a plot. so far, the UK shapes up like this, they want to put more in place though, that’s the plot, they’ve got a plot, somepeople have a plot, 24.04.15 UK London The Macbeth, 25.04.15 UK Manchester Islington Mill  Promoters get in touch, send flowers, I know what, me, I’m just a botanist mate, you can tell me by the way I walk. Two of the finest bands in the world right now….

Those KAYODOT and BOTANIST dates so far in full… then, here’s their plot;  “European Kayo Dot fans! Here’s how our tour with Botanist is shaping up. If anyone can help fill in the off days or TBA’s, please write to nanouk@avocado-booking.com as soon as possible. THANKS!!!!

More later, maybe…. More is our name, volume is the game, that’s the plot….