And more Death Grips, now with added visuals before we address that angry mob. Don’t you worry impossible for anything to be a big deal, and don’t be thinking we’re just going to cover your big deals and things, don’t be taking it all for granted now with your angels and your ring tone jingle my swan song…. 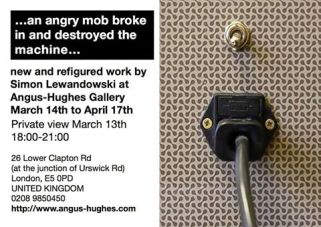 an angry mob broke in and destroyed the machine…  the name of an art show that opened last Friday night up at the top end of Hackney, East London, just beyond the Narrow Way heading towards Clapton at the rather hidden Angus-Hughes Gallery…“New and refigured work by Simon Lewandowski” in the bight white space. This really is a beautiful space to explore art, a refined space, big windows, good light, formal yet inviting…. Once again, you wouldn’t really know the gallery was there, looks like a big townhouse unless you know, do like this space, the lack of a sign or any attempt to communicate withe passing people is infuriating, but that seems to be the way with every London gallery big of small .  There’s a healthy enough crowd here for the opening of this rather intriguing show though, people in the know and what-have-you, and if you do knock on the big black door it is opened with a welcome and a smile as the strange circle of coloued light-bulbs great you….
. 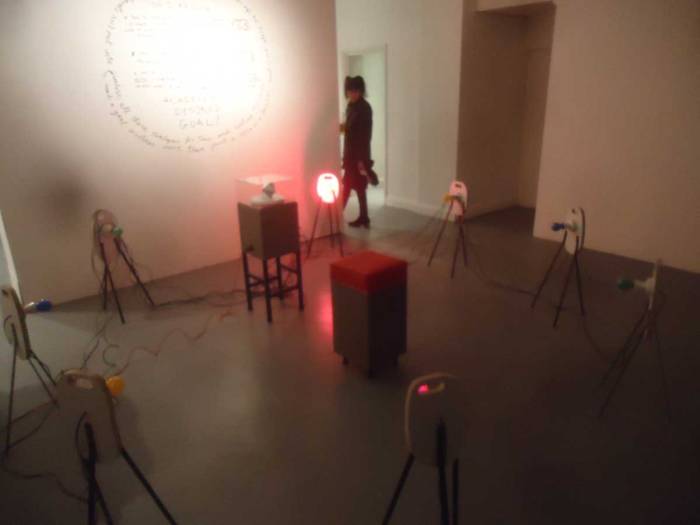 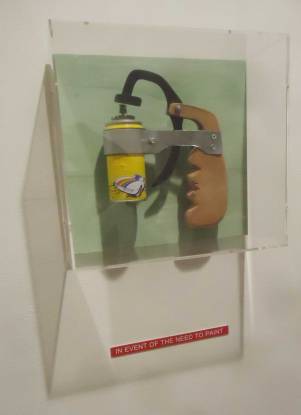 For Angus-Hughes Gallery he will revisit the familiar – including the repeated, the reversed and the mesmeric – as well testing the going on some new ground.

This is a show that will make you smile, there’s a warm undercurrent here, a mischief, almost cartoon-like illustration, machines that reverse things, circles of light that invite you to step in to (or dare you to?). Not twee fun, and fun is not the right word, the show has a wit to it, looking in to the mystery of things, personal, reversals. not quite Heath Robinson, more unexpected objects next to each other, unexpected words, unexpected shapes, backwards and forwards if you have the time, haphazard time to step in to the cirle of flashing light bulbs and see where it just might transport you? Would all this be the target on an angry mob?

The Palindrone Dansette is a portable device that plays vinyl records backwards and forwards at haphazard intervals and was originally made as a test rig for The Reversing Machine (an attempt, with Sam Belinfante, to build a functioning time machine). Another, as-yet-unnamed, piece references a long history of patent devices for mechanising altered states of consciousness – purporting to induce a trance-like state in the complicit user.

and drawing under self hypnosis? Would you ever escape? And what was that word on the floor? What sort of world have we entered here? What kind of minds? Did I mean to write that? What kind of complications?

Also included is a selection from a body of drawings made under self-hypnosis over the past seven years and shown for the first time; these may reveal something about what is going on in the rest of the work (or just what was going on in the artist’s mind the day they were made).

Finally, new sculptural objects that link form and language in oblique but telling ways. A New Word Order and ShankForce – show another strand of the Lewandowski’s practice in which text becomes a part of objects which remind us of the complications that can arise between what we write, what we mean and what we do.

Snap shots from the show, click on them to enlarge (photOs/words SW)

“Footage of the Reversing Machine, a work by Sam Belinfante and Simon Lewandowski, installed at Art Laboratory Berlin (artlaboratory-berlin.org/html/eng-exh-26.htm) from March to May 2012. The installation alludes to the notion of Kairos as opportune time, as opposed to Chronos, the course of time. The artwork is a constructed mechanism, whose central piece, called by the artists a Time-Setter or Chronocrator, is an attempt to examine temporal perception by means of running different machines forwards and backwards. Both its analogue structure and its emphasis on bi-directionality (dual-direction) call modern conceptions of linear progress into question.

This palindrome is an artistic reflection on our contemporary life with its many simultaneously controlled processes and repetitive actions. “The central device (literally and figuratively comprising the functioning core) is a kinetic sculpture in the form of a self-reversing gearbox mechanism which will trigger and power various (forward and reverse) looping devices.” The drive shaft powers a series of machines (a turntable, a slide projector, moving lamp, etc.) – and then switches in reverse, forming a mechanical palindrome which in turn creates a poetics of dichotomy: on and off, forward and reverse, loud and quiet, dark and light.

“This behaviour is entirely determined by the mechanism, (not by any kind of digital controller) being consequently completely transparent – revealing both the what and the how of its action.” (Belinfante & Lewandowski)”

One thought on “ORGAN THING: Ring tone jingle my swan song…. an angry mob in Hackney? What is on the mind of Simon Lewandowski?”