Freeze part two, back for more… Still haven’t married the slogans in the tunnel that funnels us in to Frieze, welcome to what? No, this still isn’t purgatory, back for more, words and photos from the first visit here.

It really is impossible to take all that the vast Regent’s park post-something-like-modern 90’s looking aircraft hanger that is Frieze has to offer in one go (god knows how the people actually paying the hefty ticket price deal with it). Spent three hours or more in here on Wednesday, obviously there was more to explore (and we’re not talking Frieze Masters or the Sculpture park, not had time dip a paint-splattered boot in the direction of either of those two experiences yet), So much to see in here, how could that giant cat have been missed first time around? I know Felix has been in here from the start!  Friday afternoon, lot more bodies in here today, not so well dressed now, the weekend is here, the security people are looking tired now, the security are flagging, the stealth hoover-pushers are still quietly hovering and hovering in their ninja black, body language not quite so positive now, a few of the gallery booths have adjusted and rearranged (work sold?), the smell isn’t quite so opulent, a slice or two of the great unwashed have made it in through cordon today, there’s a lot more people in here this late Friday afternoon than there was on Wednesday.

The Gallery people still don’t want to communicate, they’ve probably had enough by now, don’t-bother-me-please body language, there’s still snippets of annoying conversation drifting on the air, “oh there really is no point in going to London galleries now, and oh the East End is well and truly dead darling” declares one annoyingly horse-like whinny-arse whiny New York accent from some gallery or other ( (very whinny, very annoying, hell I’d hate to be the artist he represents), he doesn’t like his loud opinions being questioned, he almost looks shocked to be confronted, and the art he has to offer is the kind of thing a first year textile design student would offer whilst still finding feet. On Wednesday it was a little aloof and just a little bit full of its own self importance, today the collective thing that is Frieze feels a touch arrogant. Arrogant and still very much out of touch, no not out of touch, just too complacent to get in touch, dismissing without ever bothering to go and look. 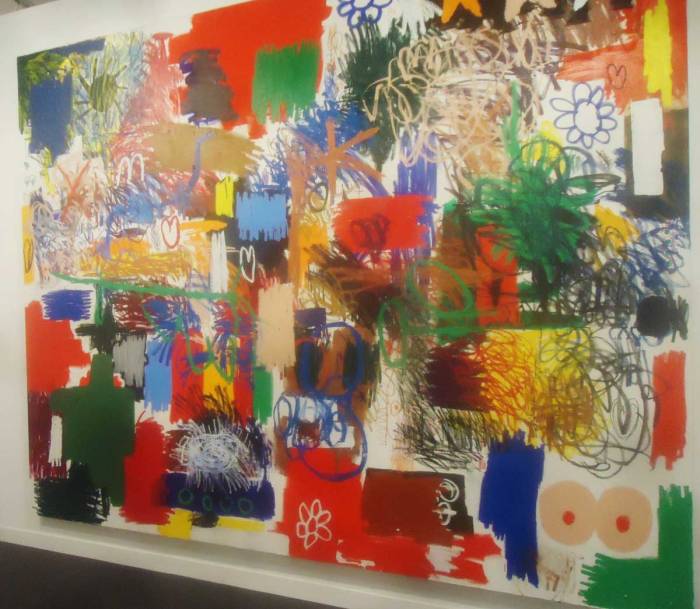 A second visit then, a second visit, and yes, there is lots that still pleases second time around, and yes, although most of the art in here still feels a little too slick, still feels very safe, still very (very) nice and extremely polite. There are bits of things that do threaten to excite, LA’s The Box gallery injects a bit of energy, Yngve Holen‘s washing machine air turbulence is intriguing, on the whole though, to repeat the words posted here last Wednesday after the first visit, this is all very very polite.  This is a very slick contemporary art fair, it feels like look at performance cars in a sales room rather than out on the road, it does feel like an expensive car showroom.

And yes of course there’s some really good art in here, of course there is, how could there not be? The already mentioned Box gallery from LA is stand-out alive, their small booth has some energy, a touch of attitude, a bit of an edge, a hint of the right kind of swagger, the people from the gallery in there looking after things are too busy talking to each other to be bothered answering a polite inquiry about who the artist(s) might be.   Still mostly enjoying being in here in the vastness, in here exploring the Frieze experience. There is lots to discover in here, avoid the attitudes and Frieze is, on the whole, a positive experience, the discovering is at times a delight, the giant Felix cat is fun, the upside down drum (and the sound of it) needs a smile, there’s new paintings from Peter McDonald joining the electric blue carpet in the Kate MacGarry Gallery space, do like Peter McDonald‘s paintings, glorious painting on the wall of Belgium’s Zeno X gallery space from Michael Borremans, can’t help but admire George Shaw‘s drawings on the Wilkinson wall (Wilkinson Gallery, as unfriendly and aloof as they were in our Vyner Street days), that delicate Kerstin Bratsch antique glass really needs to be enjoyed again, Wilhelm Sasnal’s black and white arm painting (in Poland’s Galeria Foksal space) has a powerful impact. Actually when you go look at the websites of these galleries, on the whole, they appear to have a lot more to offer than their collective polite conservative restrained approach to things here at Frieze. 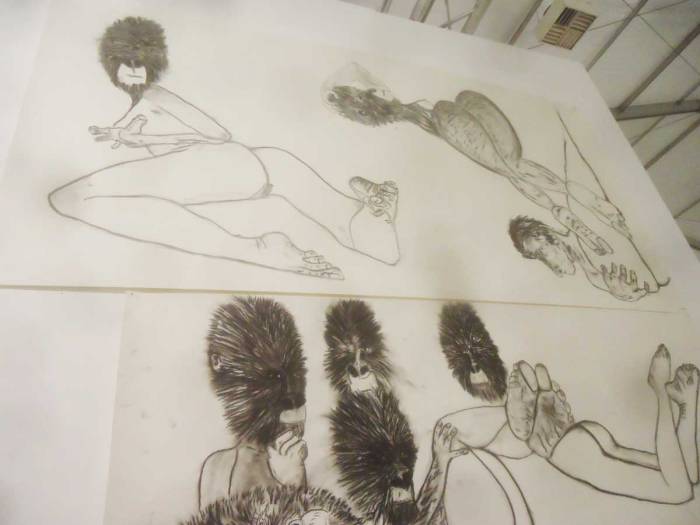 Most of Frieze was covered in last Wednesday’s Organ outpouring of (too many) words and fractured photos, and on the whole, Frieze, for everything that is wrong with it, for all the aloofness and that whinny sniff of arrogance, on the whole Frieze is a positive experience – well worth coming back for a second look. Yes it is easy to slash and sneer, to cynically kick at everything Frieze stands for, and yes it is far too big,  impossibly so, of course. Is Frieze a tad soulless?

This is about exploring art though and there is some good art lurking in here, some great art, one to two outstanding pieces, it has to be said though, there is nothing in here that really induces that buzz of excitement, that thrill of the encounter, nothing that really truly catches breath, nothing that demands you you really really (really) need to see it. The art in here is (mostly) very conservative, the art is (mostly) polite, (mostly) very nice, enjoyably nice, very slick and mostly good, and I guess, considering what Frieze is about, that is just about the best that could really be hoped for, I’m kind of enjoying my Frieze experience, pleased to say this isn’t the best art has to offer in 2015 though, it would be disappointing if this was a good as it gets, nah, whinny voice needs to get off his fat New York arse and get out his comfort zone, most of these galleries need to, there’s some great art in here, but the best is out there.   (SW)

The main Organ review or response or whatever you want to call it, is over here.

74 more lo-fi photos, things that might have been missed first time around. Click in an image to enlarge an image or to run the second slide show (far more in terms of imagery from the first visit here)

3 thoughts on “ORGAN: Frieze part two, back for more. A whinny-arse New Yorker, a giant cat, some washing machines and…”