Deadcuts on Saturday then, we mentioned it a couple of days ago here, the special guests joining Deadcutts have now been announced, Starsha Lee are making their debut. Are they a “they” or is Starsha Lee a person with a band? The name of a band or the name of a singer with her band? Does it matter? just get there and check it out. First ever performance from rather tasty sounding Starsha Lee, rather like the little bits we’ve heard so far…. and rather like the imagery photographer Sofia de Oliveira Martins is throwing up as well.

Starsha Lee are Starsha Lee on vocals. Crispin Gray on guitar and backing vocals, Steve Nightmare on drums and Michael Vakalis on bass guitar. Here’s an early taste of what the new band are doing….

Full Deadcut details and show details here, Painterly things and such happening here at the rather mysterious Ritter-Zamet gallery next Saturday. Deadcuts and very special guests playing in one room (not sure if we can mention the special guests), rather looking forward to the special guests. Art hanging in and around another room, film and music everywhere, over in Whitechapel

The artists taking part in the show are now confirmed “GUEST ARTISTS INCLUDING SOPHIE MACDONALD JASON ATOMIC, ESPIRA, JONI BELARUSKI AND SEAN WORRALL” Meanwhile the Siren Kult artists are coming up with some rather good looking shirts and such, love these Deadcuts set list shirts….

A taste of some of the art from contributing artists…. click on an image to enlarge or run the slide show 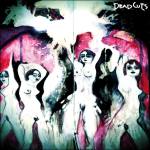 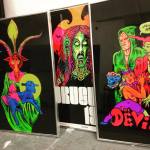