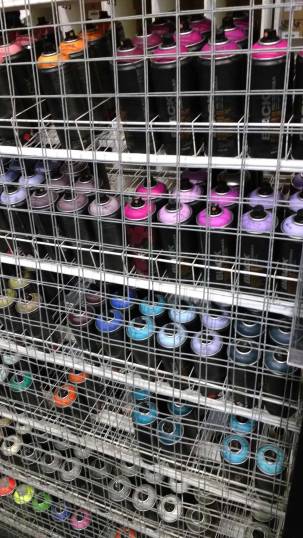 Watermelon rage and a fractured set of words from a few weeks ago that never got as far as being posted here and that really wouldn’t be fair to Stereocilia. Who are Stereocilla? Well they might just be the antidote to vibrant pinks for your wall, well no, Big ‘N are, Big ‘N are the antidote to most things and what the hell were they thinking letting him in? Angus, what were you thinking? Watermelons are nothing to do with Bristol’s Stereocilla, they really weren’t at fault, they deserve to see this page up here and they really couldn’t help that we were trapped for a week, trapped there sitting and accidentally forced to be listening to the business of art being flogged and the indignity of “vibrant on-trend” print selling to the yummy mummies next door with no escape from their sales talk and their social media plotting “we must post something at least once an hour, something on-topic and ‘vibrant and a little to the “left” so we engage with people) stuck there listening to this crap until closing time for days and days and water melon prints are “so on-trend right now” and “you really need some vibrant yellows for your walls, are you brave enough for vibrant yellows?” And will you beard growing nappy wetting twee as twee can be Coachella-loving volvo-estate-driving middle class idiots please stop sending us demos of your bland alt-folk band and Justin is so excited he just got back stage passes for Coachella, oh how wonderful, my other half just got some too, they can meet up and network together, he’s going to do some live blogging, you must come to see his band play an acoustic set at the coffee house next week, so exciting, they got played on BBC Radio 6 last week, we all gathered around to listen, the kids were so excited, he sold a record last week as well, we’ve got boxes of vinyl in the house at the moment, so proud of him, so excited he’s going to live-blog at Coachella..

And stop telling us you’re doing a DJ set when all your doing is going to that East London pub where they charge you an arm and a bleedin’ leg to play four records and then laugh their heads off at you playing them while they count your cash and take the pee out of your beard.  “Coachella is it? That’s impressive, would you like to play another four records? Have you got a Prince one there, oh cool, that will be another £30 quid please”.  Oh gawd here comes another one with his out of tune acoustic guitar and his beard and his on-trend going to Coachella with his vibrant water melon print once he’s dropped the kids off at the nursery and worried about the fact that maybe the “vibrant” lemon print in the white frame is more “on-trend” now and bring me the head of Axel Rose on a ten foot pole and fire up Big ‘N, oh for the wings of any bird, other than a battery hen and a whole nine days listening to them sell prints in the next room, I almost lost the will to rage… (sw)

What else have we got in here, Arrows Of Love? Nah. Don’t know, is this any good? Stereocilia I mean? The water melon flashbacks are clouding judgement now, thought it was rather good the other day, and that video adds rather a lot to the sound, here it ls, you decide, .

“Stereocilia is Bristol based guitarist and composer, John Scott. John uses his guitar and live looping techniques to create dense, rich layers of sound. Over the past 10 years John has performed around the UK & Europe with various projects. He has also presented work for live radio broadcasts, and soundtracks to short films.John’s Debut album Mumurations is out now on his Echoic Memory imprint.”

A visit to the Chrome and Black sweet shop was needed today, a visit to the sweet shop means a dash down Clare street and the every evolving walls of that East London back street. We’ve cover the street quite a few times already in the last couple of years, no vibrant watermelons on Clare Street today, eggs still seem to be rather on-trend though.