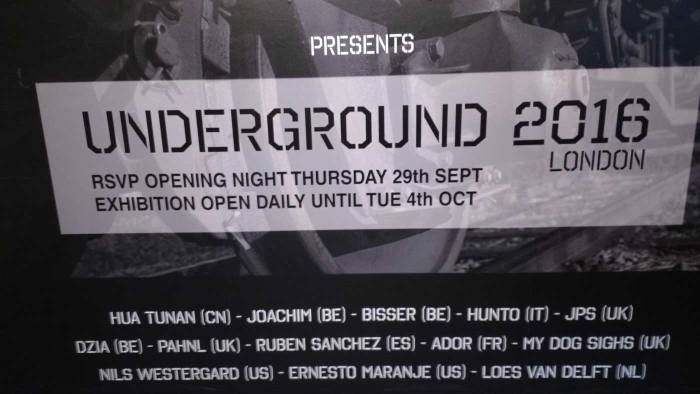 Tuesday afternoon, busy week, an exciting week (as we keep saying), Frieze week, lots to explore, too much to explore, things demanding attention all over town. Quick midday dash over to Hoxton, it isn’t that far away, quick dash over to catch the final day of  the current Graffiti Street curated show “Underground 2016”. Catch it while the short-rum show is still hanging there in that ridiculously overpriced railway arch (really does cost a very greedy arm and several legs to hire that damn place to put on an event, almost to the point that covering anything that happens in there leaves a slightly uncomfortable taste).  Graffiti Street are the organisation putting on the show, they can’t be blamed for the greed of the venue, Graffiti Street are the victims here in terms of the outrageously offensive hire price, getting tougher and tougher for artists, curators and such to find realistically priced space in this greedy city… 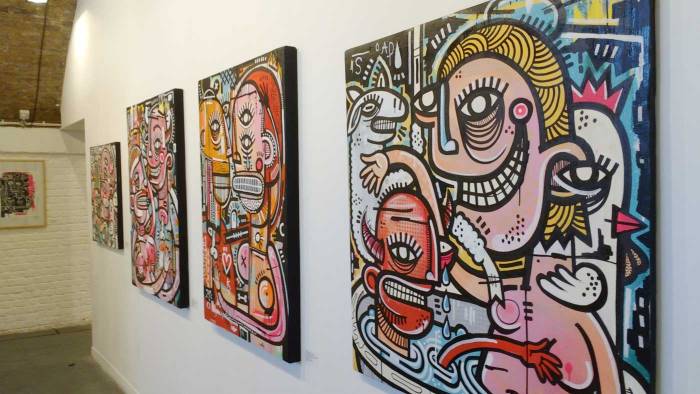 When street art comes in off the street it can so easily become a sterile thing, that vital spark of energy sucked out, the lifeblood removed or at least the flow slowed down and made to behave, thankfully that hasn’t quite happened here.  Essentially this is a collection of mostly really good-looking impressively-slick high-end graphic art enthusiastically served up with an urban flavouring or two, street art tamed and confined to white walls, thankfully not completely and utterly tamed.  Clever illustration, impressive can work, skillful techniques – that bird’s radiant green eye is rather beautiful – beautifully slick, and that rhino over there really is an impressive piece of illustration – there’s some very very enjoyable art in here, nothing that ground-breaking, nothing that challening, enjoyable though.  Of course there’s the obligatory  Basquiat tendencies, that heavy metal need to make music that sounds just like those heroes in your record collection – an influence can be a healthy thing, of course it can, we all have them – an inspiration, but take it somewhere fresh, have the guts to build on it rather than just producing something that, while looking impressive, really doesn’t add to anything that feels that much different to something we’ve seen rather a lot already, do something a little more than create worthy piece of art that while they are gallery-good really add nothing that different. 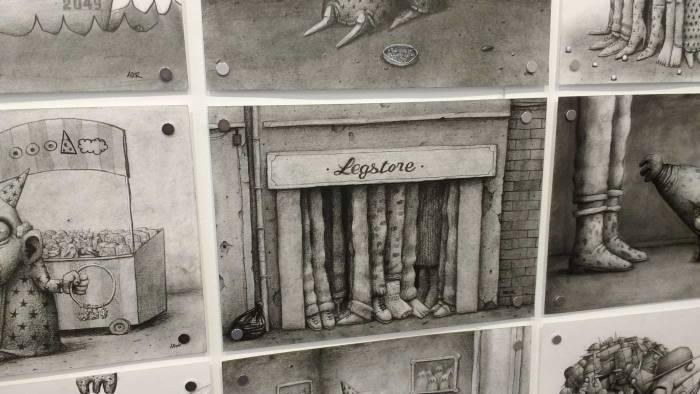 There is some impressive illustration in here, some beautifully crafted work, easy to be critical but this is a good show, there is some fine work in here.   Dare we suggest the Can Man is in danger of treading water? That’s another impressive eye he’s painted over there, almost as impressive as that Hua Tunan green-eyed bird of prey in the other room, but hey, there’s yet another face on yet another syrup can and there’s that damn stick figure thing again (we do have a lot of time for MyDog Sighs, that Rust show a few years back had some delicious textures, that was an exciting show to put on, dare we sat there something more behind those eyes, really felt like he was going somewhere exciting with it, he’s kind of backed off a little, playing it safe, treading water). .

Actually as impressive as some of this art is, overall it does kind of feel just a little too safe in here, just a little too slick, and as is oftern the case with these kind of things, just a little too much about technique and not quite enough in terms of substance and genuine artistic challenge, artists slightly on automatic pilot?  What this actually is is a pretty good graphic art show, a strong showing in terms of that thing they call “urban art”, overly slick though, some of it comic-book-good, some of it very clever painting technique, impressive stencil-stylising, a lot of it very very slick, hey, look how clever I am. A lot of it colourfully good, bright, and yes some of it is just a tad derivative as well (and just maybe one or two pieces maybe just not that good if we are to be brutally honest, that shelf of small objects kind of lets things down a little).  And yes, once you hang it in a gallery it loses that essential energy of the street, actually the highlight of the show might just be the piece outside on the wall jousting with the street signs, the street noise, the mess of the car repair shop and the fractured concrete under foot – for all that though this is a very good show, there are some very impressive pieces of art in here, more in a minute, got to nip out for a moment, told you this was a busy week…. 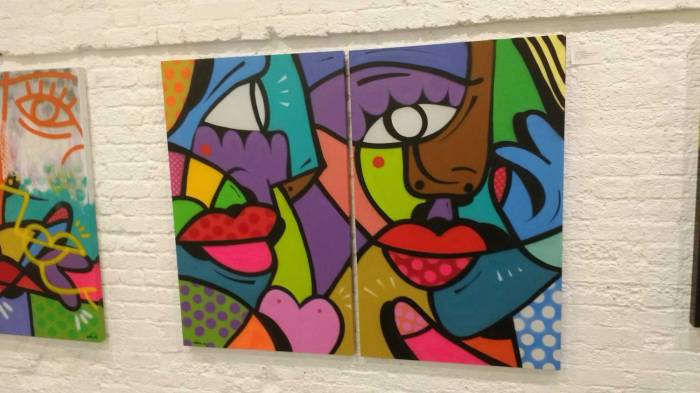 STOP PRESS:  We interrupt this fractured review for some performance art – half way through some words from the Hoxton Arches and stuck in here in the studio waiting for a delivery that’s already late, there’s an evening of performance over at New Art Projects we really want to get to, artistic variety is the essential spice of East London life, there’s a night called Action Pulpeuse over at Fred Mann’s New Art Projects space, as previewed here only yesterday on these very pages… We manages to catch the last of it, battle our way down the stairs, allow ourselves to be plied by some home-brewed honey meed and catch the last half hour 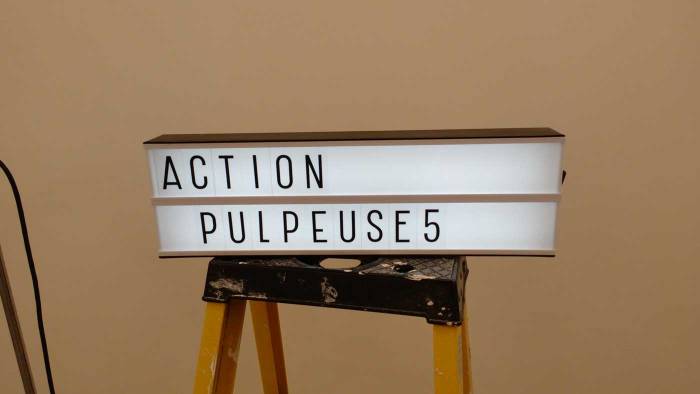 Action Pulpeuse is coming to New Art Projects London…. “and it’s longer and wider than ever, with upwards of ten playful and provocative performances touching on language, power & the body, to punctuate your gentle wander through the gallery”. Managed to miss most of it, fool on the line at Hoxton, delivery late, Sorry Dalston Ballet Company – the Ballet Company are always worth your time – Zuza Tehanu is deep in the Mire when we do get there, or at least part way in to a twenty minute performance called “Mire” 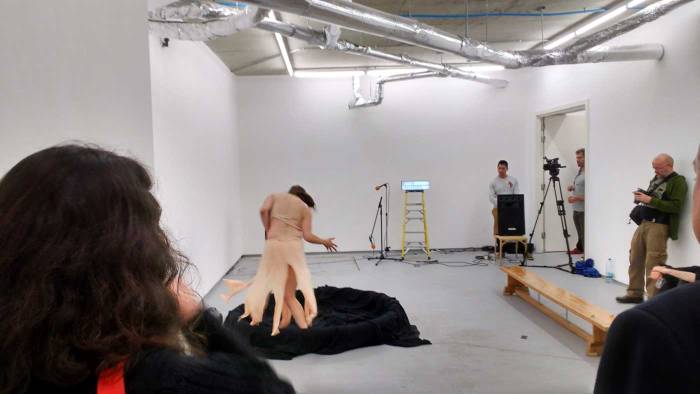 Zuza Tehanu: “Mire – Her waters spilled / Her matter embraced the ground / Her body became a mud / And from the mud back it came”  – rhythmical performance, a whirlwind of forceful energy, hypnotic, alive, intense energy, rhythmical energy, powerful, vert powerful…

Where were we? Over at the Hoxton Arches on a Tuesday afternoon catching the closing hours exploring Grafitti Street’s contentiously titled “Underground 2016” show (there’s another show with the same name next week, and no doubt another one next month). Not really sure how accurate the show is in terms of that bold tittle statement? This is a good show though, some impressive art (did we say impressive already?), this is a decent coming together of some reasonably well known international street art names, a coming together of flavours and styles – art and artists flown in from all over the world (London really not represented that well).  America’s Nils Westergard has an impressively intricate stencil of a London map on the wall, apparently it took him 104 hours. Personally I never count the hours, bit then this does seem to be about technique and skill and well I guess that is an ‘impressive’ stencil, intricately crafted… Bisser also impresses with that stylish illustration, is it anything much more than impressive book illustration on a slightly bigger scale though? Waterstone’s window is as impressive, there is some good art in here, do rather like Bisser’s style and this isn’t really about picking out the individual names, this is about the whole, the show, the coming together, Grafitti Street’s take on the “underground” scene. 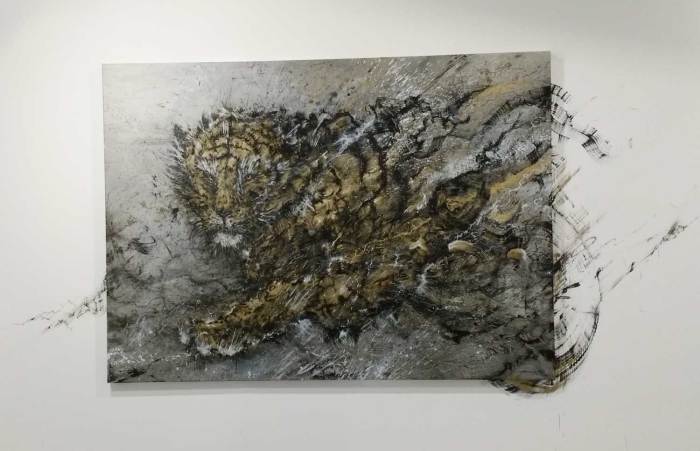 Hua Tunan has made the “long journey from China to London to exclusively paint a huge canvas for Underground  2016. Chinese-born street artist Hua Tunan is fast becoming one of the biggest names on the international street art scenes and we can see why! Hua began his artistic career painting in traditional Chinese techniques, taught to him by his father. It was then whilst studying in Singapore he became involved within the urban art scene and ignited a passion for graffiti and street art” – the tiger is impressive as well, slick, accomplished, taking up an entire wall and breaking out beyond the boundaries of the canvas. This is a good show, there are some fine pieces in here – lot of work gone in to making it all happen as well (the effort that goes in to a show like this, something that should never be taken for granted by the artists or viewers, curating shows and herding art is stressful).

If this is the underground then it really is just a very (very) small slice of it, but this is an impressive coming together under a railway arch in East London – “dope artwork by Bisser, Pahnl, JPS, Hunto, Dzia, Ador, My Dog sighs, Joachim, Ernesto Maranje, Ruben Sanchez, Nils Westergard, Loes Van Delft… an uncaged Tiger on the loose by the uber-talented Hua Tunan…”.  Dope indeed, (why do English people talk like that, this isn’t South Central Compton, you sound very silly with you “dope” and your “this is the bomb” and “aren’t we smashing it”, just not cricket.  Apparently the busy opening was  “the bomb” though, a packed party atmosphere, I read it was the bomb on one of those street art blogs, and yes most of it was rather impressive, some of it not quite an impressive as the really impressive pieces, most of it was very slick, some of it too slick, some of it stencil-by-number,. most of it very impressive though, some of it rather beautiful actually, a lot of it rather like lots of things we’ve already seen, but then isn’t that the case with most urban art shows? A decent enough small slice of the vast vast street art underground – a rather decent show, some rather impressive pieces of street-flavoured graphically-orientated slick urban art, a good show, not many risks taken in terms of the artists or the art selected, a decent enough show though, did we say there was an impressive piece or two in there? And that was Tuesday, what does Wednesday promise? The opening shots from Frieze? The Sculpture Park? A Henri Matisse collection opening south of the river? Exciting week, bring on Wednesday, aswe said yesterday, art excites   (SW).