Today’s Organ thing of the day, as we still shudder over the horror and the reality inauguration speech yesterday, is thrown over to the graphic beauty of artist Shepard Fairey.  This time using his art to create thought provoking  images for the ‘We The People’ campaign. Graphic art with a purpose, art that aims to provoke the rejection hate, fear, and racism, something that seem to be perfectly acceptable during the 2016 U.S presidential campaign. So on Inauguration Day yesterday, ‘We the People’ flooded Washington, DC with  “new symbols of hope” from the artist who’s Hope image from eight years ago captured the feeling of those times 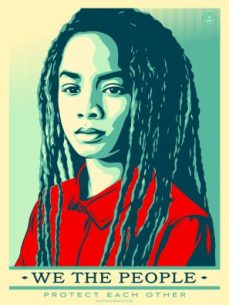 The ‘We the People’ art was commissioned by the Amplifier Foundation, from some of the greatest activist artists working today, such as, Shepard, Ernesto Yerena, and Jessica Sabogal. They have all collaborated with photographers to create a series of images that capture the shared humanity of a diverse America. The artworks were made free to download and were placed as advertisements in news papers across America so everybody had access to the campaign and images yesterday. .

It feels like being positively creative and coming together and doing things as one is going to be more important than ever, a time for people to unite, for artists and musicians to come together, to be defiantly positive and stand together   (sw)

Click on an image to enlarge, I’m off to paint….

One thought on “ORGAN THING: A little bit of new hope from artist Shepard Fairey…”