Taking its title from a work by Bob Cobbing, Integration Alone Is Not Enough points to the ongoing synthesis between media initiated by the concrete poetry movement – a fusion of poetry and painting, literature and sound art, typography and Eastern phenomenology – that continues in other art forms today, and relates in part to what Rosalind Krauss has called the ‘post-medium condition’, a non-hierarchical index, or entwined helix of specialised genres and modes of production that holds ongoing potential for contemporary art”.

I do like accidentally catching an opening on the way to another opening, caught this one back at the start of February, kind of rushing between two other galleries when that familiar hum of voices at an art opening caught my ear, I can’t resist an opening, art excites, and once again we find a gallery alive with some rather beautiful art, some glorious marks, some subtle beauty, typography, words, marks, colours, textures, beautiful textures, typewriter marks, typewriter poets…

“Small revelatory examples of this historical fusion are contained in Tom Edmonds’ painterly typewriter poems Everything Forever, A Flight of Jays Squawk Squawk, and Milky Way, which present visual depth on both a modest and cosmic level. Like Edmonds, the artist Ken Cox died relatively young, and the latter’s work is represented through a similarly celestial work Suncycle, a brass sculpture that sits alongside a memorial folder made after Cox’s passing by fellow concrete poets from Gloucestershire”.

This isn’t an at show that’s going to hit you hard, it isn’t loud, the energy doesn’t jump at you, it is there though, waiting, hiding, there quietly in the details, wanting (not demanding), waiting for you to close in and discover, to delight, to quietly connect with the pieces, quiet beautiful pieces, a show that deserves far more than just a glance (and a wave of a camera phone). Extremely beautiful and delicate, intensely felt, exquisite details, a beautifully subtle hang, space to breathe, just right really…

“The Gloucestershire concrete poets famously including the Benedictine monk Dom Sylvester Houédard who, somewhat problematically for his monastery, was connected to the prevailing counter-cultural moment that sometimes included politically explicit subject matter. However, despite this fact, Houédard’s rituals attempted to transcend any reductive or dogmatic rhetoric, and his influence can be seen throughout other works in this exhibition.

The connection between counter-cultural language and concrete poetry of the late 1960s is contained in Peter Mayer’s work, who made a special centre-page foldout insert for the International Times. Mayer operated as an artist across various media – writing, publishing, teaching – and pursued an ongoing collaboration with Cobbing, who together edited the now famous 1970s manifesto Concerning Concrete Poetry (1978/2014). Importantly, this exhibition represents the first time that works from Mayer’s archive has been seen in the UK”.

I’m not going to claim know too much about this show, these artists,  or anthing about the words and tectures on the walls tonight, but they have got me rather curious (and I have been back since to really look and enjoy it all), I really don’t want to say too much more about the beauty to be found here, youhae the words of the gallry and some quickly grabbed imagery from the opening night, you have time ot go explore (if you livein London) and it really is 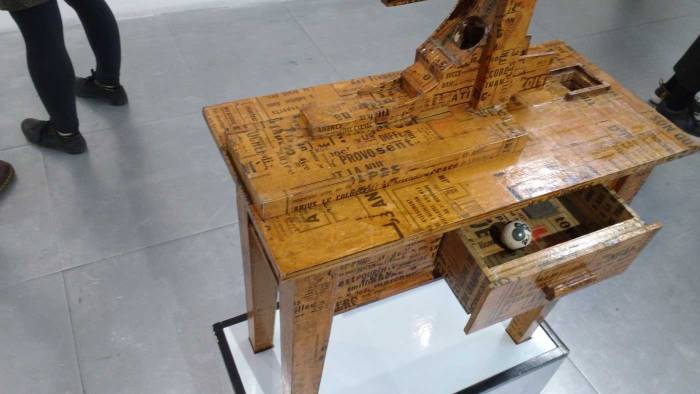 “A significant influence on this exhibition has been Jasia Reichardt – curator of ICA London’s seminal exhibitions Between Poetry and Painting (1965) and Cybernetic Serendipity (1968) – who in a recent conversation stated that concrete poetry and computer art were the first truly international movements, more-so that the concurrent related historical genres of conceptual art and post-minimalism. In many respects, apart from the fact that Reichardt’s ground-breaking exhibitions presented examples of networks in the cross-pollination of painting, literature and computer art, they also stage the potential for further developments in a contemporary post-digital environment.

This exhibition is part one in a two-part series curated by Andrew Hunt, the second of which – Dom Sylvester Houédard: Typestracts – will run between 26 May and 14 July 2017 and will coincide with the publication of a hardback book edited by Hunt and Nicola Simpson containing previously unpublished work and texts by Houédard”.

Curator’s Biography – Andrew Hunt is a curator and writer based in London. He is currently a Research Fellow in the Faculty of Art, Design & Architecture at Kingston University and Co-Director of Reading International. Recent independent projects include As You Change So Do I, a series of public art commissions for Luton, UK (2016 to 2019), The Green Ray, Wilkinson Gallery, London and Concerning Concrete Poetry, Badischer Kunstverein, Karlsruhe (both 2016). From 2008 to 2014 he was Director of Focal Point Gallery in Southend-on-Sea, and in 2012 he was a member of the Turner Prize jury. He contributes to magazines and journals such as Art Monthly, Domus, frieze, Mousse Magazine, and TATE ETC., and is founding editor of the Slimvolume imprint, which to date has published editions and books by over 250 artists.