Yowie are in town tomorrow, this is very important, the town being London, Yowie being one of the finest bands on this particular planet (no pressure on them to deliver their awkwardly rewarding musical goods tomorrow then). Tomorrow is of course Friday, the venue is in Hackney, and Yowie are over from the U.S on a very very rare visit – this is exciting. we’re excited, the people putting the gig on are excited, the Eleven O’Clock Pigeon is probably excited, she could probably fly over to the venue, it is only a flap or two away from the Organ bunker and she does hang out here listening to things like Yowie or Free Salamander Exhibit or Lovely Little Girls or Upsalon Acrux or your new favourite band Shimmer rather a lot.  The Yowie gig tomorrow is at The Brewhouse, London Fields, Hackney E8 (just head for London Fields railway station, the nunue is in one of the arches)  and the good people of underground gig promoting operation Chaos Theory are behind the show – rather them than me, putting on overseas bands is hard work and a damn good way to lose money (we speak from experience),  Last Sunday Kunel from Chaos Theory joined Marina on her weekly Other Rock Show on London’s finest radio station Resonance 104.4fm, for a chat about music, the gigs and well have a listen, the Mix Cloud of the show is just down there. Here’s what Kunel had to say afterwards (via a Chaos Theory mailout)…..

“Last Sunday I had the immense privilege of being a guest on the legendary Marina Organ’s Other Rock Show, a weekly noise-fest on Resonance FM… Marina has been co-running The Organ Magazine and blog for 31 years, has had this radio show for 14 years, and has discovered, met and introduced hundreds of people to some fantastic oddball musicians over that time. So I was in the presence of a true guru right here, Listen to her show every Sunday night for more great discoveries. I hope you enjoy it” – – Kunal

– Thanks Kunal, although I guess it should maybe be pointed out that Marina can’t be blamed for most of the opinions on the blog of for proclaimations about things such as Märvel’s .W.A.S.P covers championed as glorious pieces of fime art – ORGAN THING: Märvel, you wanted the best and you got the best, kiss this…). Here’s last Sunday’s radio show with Kunal….

And so, the to the real point of today’s Organ Thing, the real was to just remind you that the rather vital Yowie and there rather different music language can be experienced here in London town tomorrow, there’s the flyer, find some music underneath aid piece of flyer art… 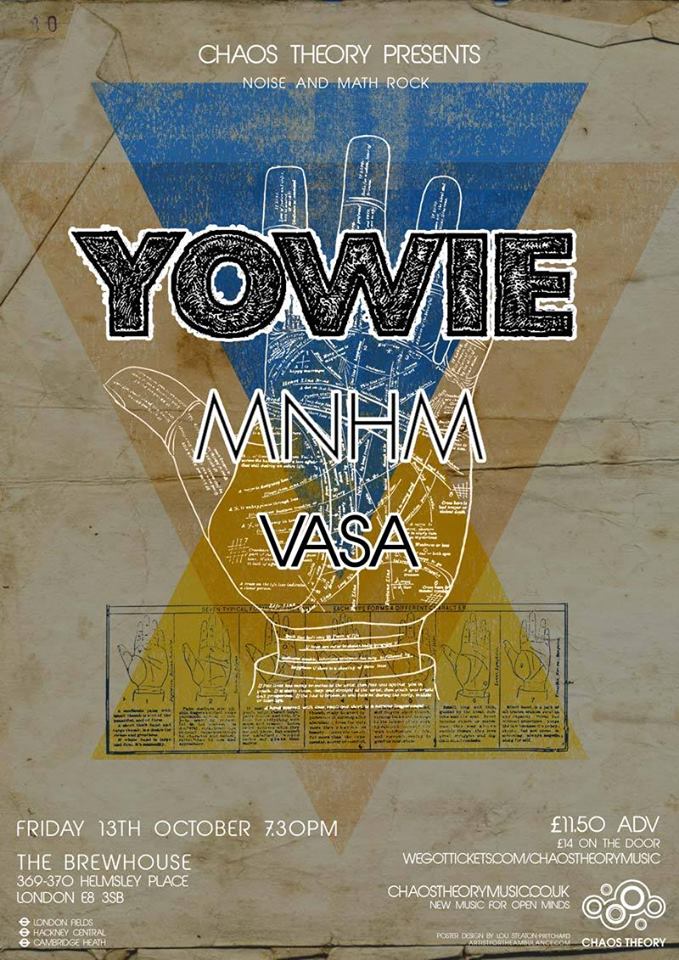 “MNHM give birth to ‘melodic noise’ from a higher and heavier dimension combining elements from post/math-rock and doom. After releasing their well-received debut album Super-Empowered and touring all over Europe, the band teamed up with producer Rocky O’Reilly (And So I Watch You From Afar) to work on their second album ‘Of Empires Past’ which was released on May 5 2017 on Consouling Sounds”

There you, today’s Thing of The Day, Yowie are busting a gut and driving like demons ot get here tomorrow, you might not get another chance, tough being a self-fundeing underground touring band, there’s more details about the gig here, hopefully see you there…And yes we do need ot find a new Yowie photo, that green ones has bee nused three or four times now.

More of this kind of thing tomorrow, maybe…..