Now those vocals are feral, the whole thing is, not had time to have a a look to see who he or she or it is yet but those vocal are feral! Come on, tell me how like it?  This is seriously jagged, we’re talking broken glass, awkward jagged bit of broken glass, jagged bits of broken glass in those bleeding knee caps that you just crawled over the ground on. Who are these people? This is excellent! Who is this band!? Where did this come from? Who are Shimmer? 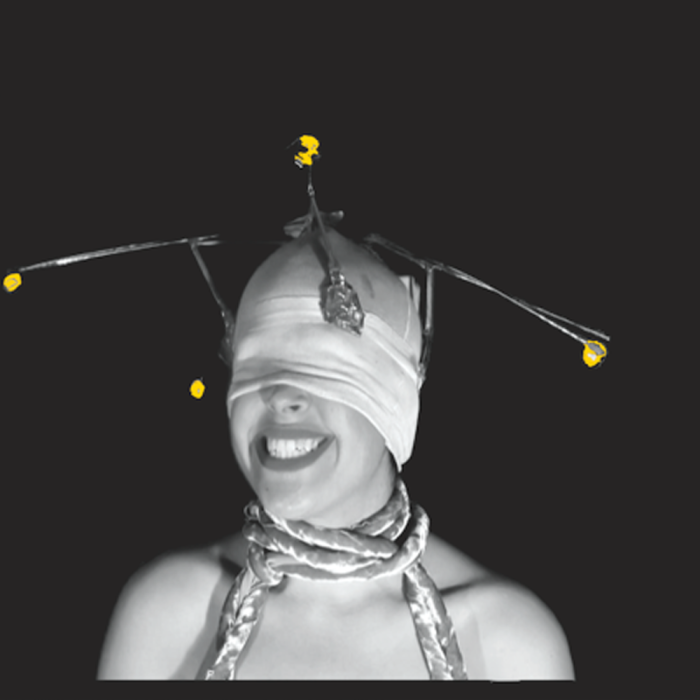 “Hello” read the e.mail,, “I’m pleased and proud to present the debut LP from Shimmer, the New York/Philadelphia-based noise rock quartet featuring Ani Ivry-Block (Palberta), Nina Ryser (Palberta, Data), Paco Cathcart (The Cradle, Sweet Baby Jesus) and Simon Hanes (Cloud Becomes Your Hand, Tredici Bacci).  These four titans of the northeast underground rock scene have joined forces to create what is undoubtedly one of the most interesting and hard hitting live performances I’ve ever seen.  On top of that, they’ve concocted an equally fierce and jaw dropping album which I present to you today.   With that, I cordially invite you to Enter Shimmer!”  so said someone via one of the several hundred e.mails that land here claim this bit of music or that artist or this gallery or that band are the thing we really need to be exploring and shouting about today….

Now as soon as this album landed it was straight on to the airwaves via the Other Rock Show and Resonance FM, this needed to be broadcast, this is what we call radio friendly, here’s the opening track, that first taste that got our ears…

And that attitude does really grab attention as well  “It seems rare these days that noise rock is what it’s advertised as. Bands use a fuzz pedal and suddenly they’re self-proclaimed noise art. But not Brooklyn quartet Shimmer. With their debut self titled album, it’s safe to say you get what you pay for. A rollicking blend of incoherent rhythms, trebly-beyond-trebly guitar, and unheard of vocals constitute the ten-tracks-in-twenty-three-minutes of this record. Pulling from, and fleshing out everything lamentable about the state of the world today, Shimmer sprints in the opposite direction of convention and tears down anything resembling “pretty” complacency along the way. Things aren’t okay, and we need a band that reflects this. Like T.S. Eliot did for post-World-War-I Europe, Shimmer’s debut acts like something of a Wasteland, Ani Ivry-Block’s blood-curdling guttural howls smashing the two-way mirror of societal norms to bits and leaving us to try to piece it back together and make sense of it. An image is there, but it’s skewed. It’s the incomprehensible sound of individuals striving, clawing, dying for individuality in a world trying to smother it, jumping from the pure outrage of opener “Enter Shimmer” to the pensive, ill-at-ease whispers on “Okay” and “Heavenly – Not Fade Away,” and back again.”  and yes, I did blatantly cut n’paste the press release just there

.
“It’s all surrounded and supported by a car crash of twitchy, heavy instrumentation that familiarizes its listener with the obscure and absurd. It doesn’t make sense. It doesn’t have to make sense”, but it does, it makes so much sense, it has to make sense and it does in such a glorious way, the pounding, the disquiet, that uneasy rage of her’s, everything about that almost possessed voice, it all makes perfect sense (it reminds us of those early days of Huge Baby). It is all noise, well it is but some of that noise is quiet and sometimes less is more, the quiet landscapes, the never obvious paths the suggestion that if this is their first album then anything is possible (then again if this is the only thing they ever make then this is more than enough, more than most bands with ten albums and twenty years behind them achieve).

.
“Their live set plays more as performance art, or immersive poetic theatre. Take away the backing sounds and you’d still have enough of a spectacle to tour as its own abstract circus of insanity. Ani traverses both stage and floor, amps and crowd, navigating self and spewing it out in front of everyone to dissect, while the rest of the band thunders prominently in the background. There is costume, there is a frenzied energy, there is catharsis, and it’s ever-changing. This shall not be a band to miss, neither via album nor on stage”  Sometimes the press release does get it right and sometimes, not often, maybe once a year if we’re very lucky, something very special lands without warning (and yes they did have us straight away checking out Palberta and such)

Oh look, there’s no time, we’re up to our necks with the fall out from Hackney WickEd and Something Blue and the rest of the leaf growing (and things we can’t mention yet), but you’re asking about those tracks played on the radio and Shimmer don’t really have much of an on-line presence and we can’t hold back on sharing this and anyway, you really don’t need a review, all you need are the signposts and the information we have and here you go, Shimmer, our new favourite band. (SW)

One thought on “ORGAN THING: Here you go then, Shimmer, your new favourite band…”