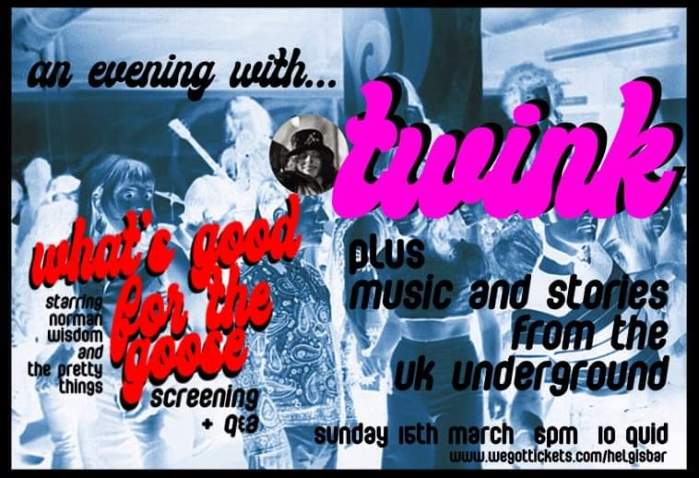 STOP PRESS: THIS EVENT HAS NOW BEEN CANCELLED DUE TO THE CORONA THING

Pink Fairy Twink is back in town for a special evening of music, talk and film! He’ll introduce a rare screening of the psychedelic 60’s b-movie What’s Good For The Goose, starring Norman Wisdom and featuring Twink with the Pretty Things, followed by a questions and answers session moderated by Merlyn Roberts of World Wide Weird. We’ll be screening an extremely rare uncut version of the film, never shown before in the UK, featuring some more footage of the Pretty Things! After a short break Twink will play some songs from his huge repertoire that has involved such acts as Tomorrow, The Pretty Things, The Electric Banana, Syd Barrett’s Stars, The Pink Fairies and his classic album “Think Pink” and it’s sequels, and will also talk and tell various stories from his career and the larger than life characters that have inhabited it.

It happens on Sunday 15th March (6pm until 11pm) at Helgi‘s, 177 Mare Street, Hackney, London, E8 3RH – the Facebook event page is here, They’re putting on a lot of rather good gigs and events at Helgi’s at the moment, think psych, doom, heavy rock, 70’s flavours, punk, they even have a night called Supper’s Ready although we’ve yet to hear Supper’s Ready or some proper full on prog, they’re more into their psych and their heavy rock and their space rock over there, no selling England by the pound then. They say “Helgi’s is an occult den of iniquity showcasing the undergrounds finest psych, rock n roll, punk & heavy metal djs and bands, with cult film screenings and events.. Reclaiming Hackney for the true outsiders! Support your local trip joint!”

One thought on “ORGAN PREVIEW: What’s Good for the Goose – an evening in Hackney with Twink, he of Pink Fairies, Pretty Things and such…”