DARREN COFFIELD’s latest show, Psycho, opens this coming Friday Evening at The Residence gallery here in East London.  Hopefully refreshed after his his summer of Factual Nonsense and the excellent Fate Worse Than Death celebrations of Joshua Compston over in  Rivington street earlier this fine and creative year.

“Darren Coffield’s Paradox Portraits are a superb product of art and science at its most exciting. Not only are they aesthetically pleasing and in themselves, works of art, but they excite the mind with what can be perceived, in social psychology terms as a manipulation of perception.” – Dr. Henrietta Bowden-Jones, MRCPsych, BA(Hons), DOccMed, MD(Imperial), Government Advisor and Consultant Psychiatrist.

a) A psychotic, someone suffering from a form of psychosis

b) Alfred Hitchcock’s horror masterpiece psycho (1960) accredited with signifying the birth of the slasher movie.

c) A psychobilly, someone affiliated with psychobilly culture, fashion and music

“The Residence gallery is proud to present Darren Coffield’s Psycho. These are artworks with a psychological twist, literally, as eyes are set in chins and mouths hover under the brows. 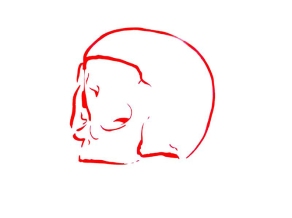 Using Alfred Hitchcock and his masterpiece as a starting point, the pictures and ceramics explore the themes of celebrity, identity, representational function and perception. These works subvert the viewer’s instinctive faculties for reading human features to create some of the most stimulating portraits of recent years. There is a paradox and psychological trigger as the viewer struggles for a brief second to interpret the information that an inverted face relays to the brain, prompting a personal reassessment of one of the most basic and instinctive human reflexes: the ability to read another human face. The portraits eschew the duality and paradox of the human condition.

These are paradox portraits…

1. Someone who acts a certain way to hide who they really are 2. A fake person  3. A psychotic person who acts normal “Anne is a psycho paradox. She wants you to think she’s all that, but she’s really an insecure bitch.”

Coffield explains: “There is now an excessive exposure to faces in the media. We see in the media faces that have been idealised, manipulated and touched up. When viewed, the face creates in the mind a kind of Orwellian doublethink. We know that we are viewing a manipulated ‘untruth’ and yet we hold the image to be true, a notion of beauty to obtain or aspire to. The face has a strong social, cultural and historical role. An inverted face is not only difficult to recognise but repositions our sensitivity to the spatial relationships between human features. Here, facial features become strange constellations of communication, whilst new facial recognition patterns emerge.”

These works are not a simple, formulaic inversion of the features, but a sensitive reinterpretation of the physiognomy. Like any intelligent portrait they have a dynamic aesthetic, individually tailored to reflect the personality of the subject. Critic David Sylvester, known for his championing of his close friends Alberto Giacometti, Francis Bacon and Lucien Freud, and described in his Guardian obituary as “one of the finest writers on art in the second half of the twentieth century,” admired Coffield’s style of painting and described him as “Another of those magicians who (probably without knowing) know how to imbue pieces of matter with light.”

In the 175 years or so since the invention of photography, the function of the painted portrait has evolved from its purpose as accurate documentary representation to a more fluid, interpretive role. Technology has progressed but it is facial recognition, the way in which our features are arranged, that still forms the basis of digital and security systems. We intuitively identify faces from birth, expressing ourselves and monitoring others by the slightest change of expression. We interpret any two random circles with a line underneath as a face, the ubiquitous “smiley” for example. It is these primeval conventions that Coffield questions and reinterprets to great effect.

Throughout his career Coffield has from time to time explored the possibilities of the often-overlooked genre of portraiture. In 2003 his controversial portrait of Ivan Massow, former chairman of the ICA in full fox hunting costume was exhibited at the National Portrait Gallery in London. Portraits of George Galloway and Molly Parkin (NPG, 2010) followed.

In the early nineties Coffield collaborated with Joshua Compston on the formation of Factual Nonsense, a gallery in Shoreditch that became the centre of the emerging Young British Artists scene. The list of participants reads like a Who’s Who of young British art, including: Matt Collishaw, Tracey Emin, Angus Fairhurst, Gilbert & George, Damien Hirst, Gary Hume, Sarah Lucas, Gavin Turk, Gillian Wearing, Sue Webster and Tim Noble. Coffield has written a new book about this exciting period in British Art, “Factual Nonsense: The Art and death of Joshua Compston” published last year.

Darren Coffield was born in London in 1969 and studied at Goldsmiths College, Camberwell School of Art and the Slade School of Art in London. He has exhibited widely in the company of many leading artists including Damien Hirst, Howard Hodgkin, Patrick Caulfield and Gilbert and George at venues ranging from the Courtauld Institute, Somerset House to Voloshin Museum, Crimea. Darren Coffield is the only artist to be shortlisted for three major UK painting competitions in the same year: The John Moores Contemporary Painting Prize; The BP Portrait Award at The National Portrait Gallery and The Threadneedle Prize. His work can be found in collections around the world. Coffield lives and works in London.

FURTHER READING: There’s an interview with Darren Coffield here on the Designboo pages.