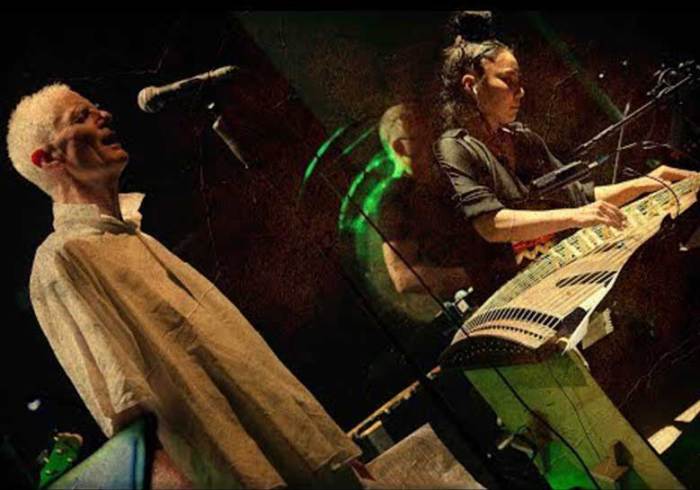 ISILDURS BANE & PETER HAMMILL – In Amazonia (Ataraxia) – An album arrives, without any real warning, no idea what to expect, well no, that’s not true, Peter Hammill is involved, well no, still don’t know what to expect, you’re kind of hoping to hear that voice, that wordplay, that learning not to shoot from the hip and those pages missing from the script, but you don’t really know what to expect. Peter Hammill and Sweden’s Isildurs Bane, I had no real idea about the existence of this new album until word of it landed here via electronic mail yesterday. The disc landed this morning, I’ve read nothing, I’ve avoided press releases or sleeve notes, I haven’t really looked at the artwork. I’m expecting good, it is Peter Hammill after all,  I’m a fan, I’m not going to deny it. You sense that something good is about to happen, that nothing has gone astray. The album is on for the first time, you can’t quite put your finger on it, whooosh, they got me straight away, this fever’s got me something rotten. Sound instantly whistling around my ears, black pages, history already written, first listen, the undercurrent, under the current. Of course it takes a few listens to decode what might or might not be on Peter Hammill’s mind this time, of course things are never as obvious as they may seem at first, but this is only the first listen.  In Amazonia is alive with colour, with instants twists, electronic details, that tingle at the start, that tease, that questioning of your footprint, the unconscious step that, before you know it, defines you,

“A stunning collaboration between Sweden’s Isildurs Bane and revered Van Der Graaf Generator singer and solo artist Peter Hammill, In Amazonia combines Isildurs Bane’s imaginative, risk-taking music composed by keyboardist Mats Johansson, and the voice and lyrics of progressive music’s most enduring and uncompromising legend. The seeds were sown when Peter Hammill guested at Isildurs Bane’s IB EXPO two years ago, an event where artists from all around the world are invited to come and work together for a week and then present a special one-off concert”.

That first listens, when it happens to be someone important to you, first listens are always a ritual. Not quite the ritual of a ride home on the bus with a piece of gatefold vinyl and a cover to study before you can get home to your record player, not quite that, but a ritual just the same. Halfway through the third of six tracks now, Aguirre, beautifully detailed, never difficult, not pop  but structured, easy to flow with, instrumentation at work perfectly with that voice and those words that matter just a little more than most people’s lyrics do. was that line he just sang there in the previous song as well? A different chapter or the same one closing? Or did I imagine that?

You’re learning not to shoot from the hip….

Peter Hammill takes up the story… “At some time in 2018, [band rep] Thomas Olsson got in touch to ask if I’d be interested in continuing to collaborate, this time on a recording project. I’m actually quite open to the idea of doing outside work, especially if it’s some way away from my usual areas, so – with, of course, the condition that nothing was an absolute given or certainty on either side until it was all done – I agreed to have a go. The files for the first song duly arrived and I began looking for spots where I could fit in…”

You see, I’ve been a frothing fan for way too many years now, I was that kid on the school bus reading the lyrics and itching to get home, I have mountains of albums and live tapes and I don’t think I have anything near a bad one – he could sing the phone book and we’d lap it up. How old is he now? The man has no right to still be this good, this exciting, this vital, this refreshing. Hang on though, this isn’t fair, there’s more that just Peter Hammill at work here, that voice does dominate (in a very positive way) and his words can’t ever be allowed to be mere sounds that help a piece of music flow, and what’s one is bone and its time to carry on, drain the dregs of a glass – so much understated drama, the undercurrent, under the current, and yes, Van Der Graaf-esque power, Van Der Graaf drama, but there’s more that just Peter Hammill here and the positive hints of his old band here, this is as Isildurs Bane album as much as it a Mr H album.

This is big, this wide-screen, this is – and I’m still on first listen here, just shooting from the hip, reacting, this is very very good. This in big, this is Peter Hammill voicing a full-on forward looking progressive rock band (progressive in the proper sense mind you, not some rehash of a mere genre, not some water-downed neo cop-out either), this is properly prog, the master;s of the9r own fate, synchronised with the current date.

back to Peter’s words – “I think there were some original suggestions for the moments in time where singing could be imagined but there was nothing more than that in terms of direction. Well, obviously I managed to find some lines which worked for me and which I thought fitted in with the piece. With some trepidation I sent these off and waited for the reaction… Happily this was extremely positive… Here it is and I think it’s very good stuff. Cinematic, wide-screen and afloat on a surging current. The instrumentation is broad palette: in addition to bass, guitar, keyboards there are multitudes of percussion, trumpets, violin and a major role for Karin Nakagawa’s koto…”

See, i said it was wide-screen. 43 seconds into the sixth and final track This Bird Has Flown – wow, that’s orchestral, that really is cinema style, wide-screen is the right description., This is big, actually, this is unfolding  massive prog rock masterpiece, both the album and this final track. So far this final piece has been instrumental – is he going to sing? Does he need to? Where’s it going, two and a half minutes of something very big and at three minutes and three seconds that was it, never did a piece of silence at the end of an album seem so right, stunning. I detest that over used word, but that instrumental end really was stunning.  Hey look, I did warn you, I told you I was a frothing fan, I didn’t know what to expect, I just put it on, I certainly wasn’t expecting that! How can he still be this prolific and so consistently good? Not so much of a fan that objectiveness goes out of the window, I haven’t found fault yet though. Let quote the press release, I have read it now, I didn’t until the end of the first listen, it all adds up…

Peter Hammill’s lyrics here frequently portray characters at a moment of decision, in the heat of crisis, at the point when a person might truly find out who they really are, in the face of adversity and challenge. The settings of those words are varied. Fluid, exciting arrangements, harnessing elements of rock, electronica and a classical sensibility, and Hammill’s vocals filled with drama and emotion, occupy a space rich, energetic, and brimming with twists and surprises. Producer/composer/keyboardist Mats Johansson is thrilled by the way the album has developed and grown with Peter’s involvement –

“Apart from fantastic lyrics and vocal melodies, Peter has influenced part of my composing process in a very positive way. I noticed that I could skip about with rhythms, beats, keys and almost atonal parts. Nothing seemed to worry Peter. Not only that, but he delivered his parts quickly and in places I honestly hadn’t expected. That, in a sense, made him the captain of the ship every now and then. Needless to say, he surprised me on several occasions and always in a really good way!”

Woooooooooooh, hit repeat, listen, this isn’t so much a review as much as it is a reaction, a first reaction, a gut reaction, you only get one first listen, I’m on my second now, I’m listening to the space and the quiet of Before You Knew it for a second time now –  the opening track, but this time I know a little about the picture that’s going to be unfolding and a little about the coming together of  tectonic plates. This second time I’m taking in the band a little mote, the compositions, the details in the playing, the flow, the colour, past and future intertwine, the wind whistling around my ears, those torn blank pages once again. And there is a lot of space, this an album that breathes so well, that flows so well –  the band and the composition of Mats Johansson work so well with that voice, love to know how much he was thinking of Peter Hammill as he composed? Sounds like he really considered the way that particular voice works, about how Peter Hammill phrases.

This really is fluid, this is clever, never too clever though, nothing worse than a show-off band, none of that here, economically expansive and not one note or detail more that it all required….Open and shut, action and Cut, Story unfolding…., Carry your past with you at last wherever you’re going, and The play has had its run, who else could get away with singing that line? Musically this sounds so fresh, yes it does sound like Van Der Graaf at times, it maybe sounds like King Crimson at times, but it all sounds so fresh, it isn’t isn’t looking back whatever he may say about whatever has  already happened.  This is bold, it all adds up, as uncompromising as you’d expect, as you’d demand, as Mr Hammill would demand, …

I really don’t want to get all hyper, I will though, you know when you’ve heard something massive for the first time, the first time you played that Cardiacs album, or the first time you heard those classic Van Der Graaf albums (imagine still having your first listen to Plague of Lighthouse Keepers ahead of you! how lucky are you t ohave that experience ahead of you?). That first time you listened to a Flying Luttenbachers album or let loose Helium Horse Fly or got into the meat of Supper’s Ready?  And what’s done is done, this much is earned, you can’t buy your experiences . Oh that bit! On your toes!, that bit of musical detail seven minutes and a little bit of change into the fifth track, into The Day Is Done… in the jungle of narrative the birds have not yet all flown….

You have about forty minutes of music here, it sounds and feels like far far more, it sounds epic,it is epic  and that perfect silence at the end. Can I handle a third ride straight away?  Does he have the right to be this good still? Of course he does but do you and I have no right to expect it? What an album.   (sw). 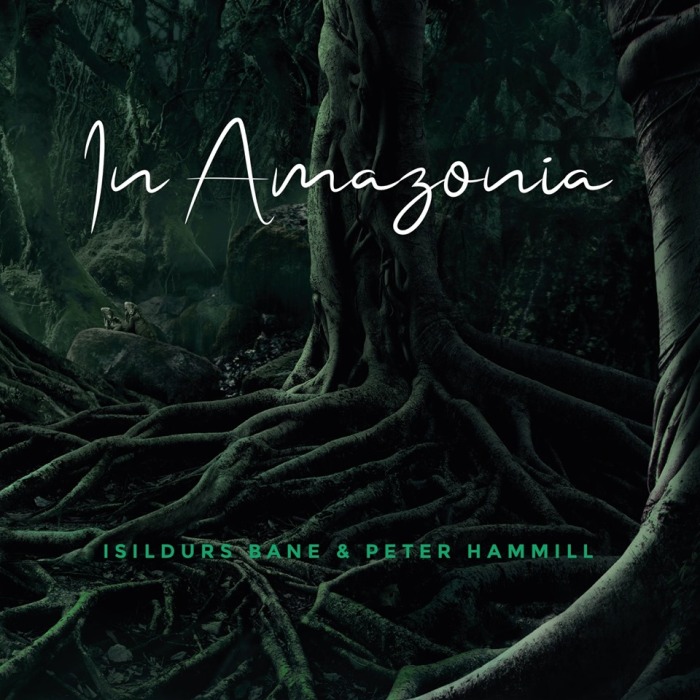 In Amazonia by Isildurs Bane & Peter Hammill is an Ataraxia release for Summer 2019.