BACK FOR A LITTLE MORE?  NO THRILLS VERSION? Shall we just pick up where we left off then? Well why not? Refreshed, paint splattered and back for a little more,  contact to switch the other, have some of then THEM WOLVES while we consider it all, would you like a new Thing of The Day? Why not? 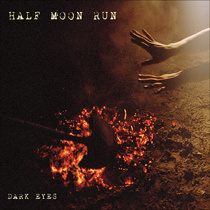 HALF MOON RUN then, their new album, Dark Eyes, is a rather warm and glowing fusing together of the familiar elements to be found somewhere near that warm rich blend of considered North American indie pop and slightly left field and not so obvious U.S alt.folk.  Dark Eyes is an album alive with gentle songs, an album laced with golden colour, a band armed with beautifully inviting harmonies, quietly delicate guitar lines and just a hint of warm electronica. Uncluttered glowing beauty from the quietly clever Canadian trio, and the threesome are in London town this week. Catch Half Moon Run over in Bethnal Green, East London, at the Sebright Arms, this coming Thursday evening (8th November), as well as up there in Glasgow on the evening afterwards.  Half Moon Run aren’t really doing anything that radically different, they taste rather a lot of the current crop of North American alt.indie folk flavoured bands, you might even detect just a little too much Radiohead in there along with the Animal Collectives and such if you really want to be over-picky about it, you really shouldn’t allow yourself to be too picky, Dark Eyes is just something to sit back with and just enjoy without getting bogged down in the whole taking apart of it all.  Half Moon Run are just a beautiful pleasure, simple as that, go enjoy…   hear Half moon Run here

And while we talk about good things that happen to be in London town this week, DEATH GRIPS

Here’s what we said back when they were last in town a couple of years ago (was it a couple of years ago?, maybe last year? We said it on LondonGigs, here’s what we said,   “Death Grips! Fuggin’ Death Grips! Beware! We’re not going to knock your door down about this, there’s the door, Flip[ where you’re at, flip where’ you’re going, it’s all about being at this gig, the mighty Death Grips, we’ve been playing them almost every week on our radio show, we keep on putting up their videos and downloads, we’ve given you many Organ warnings, do miss this, cutting edge ear frying on your toes, in your face forward looking avant hip-hop fired up by Hella’s Zach Hill, here’s some old Organ raving and drooling from last year, and some more and some more and…

An outtake from Death Grips’ major label debut album The Money Store, this song was released on the 10th of September as the 13th track of the Adult Swim Single Program 2012.

A while we’re here, here’s a couple of things that have been hanging around here this week….

Have some HOT 8 BRASS BAND

And a touch of THE COUP

And a little more HALF MOON RUN in time for Thursday

And finally today, just a touch of the fuel we run on least anyone should forget

One thought on “ORGAN THING OF THE DAY: HALF MOON RUN”