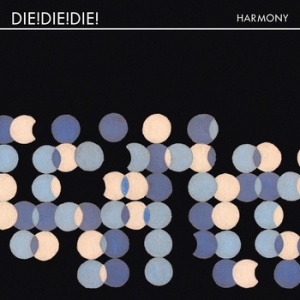 New Zealand’s rather excellent DIE! DIE! DIE! Have a new album, this is good news, this will help your walk down the street you already know in a slightly fresher way  Die! Die! Die were a band who enjoyed quite a bit of positive coverage back in the days of the full-on Organ monster, healthy bit of radio play as well, time for some words here on the pages of this not so proper no thrills version of Organ then,  let us rake a moment here and see what they have, one thing is for sure before a note is sounded, obvious oblivion will not be hitting you over the head. You think you know your town, what about that side street over there though? Die! Die! Die are our Thing of the day today.

Harmony is Die! Die! Die’s fourth album, it just came out on Golden Antenna Records, and according to the band, it was “recorded at Blackbox Studios, France, being the best recording studio in the world if you ask Steve Albini”. Albini would be a good starting point, a (not so) vague signpost, a (not so) vague reference point – not that is going be an all out assault of abrasive Albini-noise, no, there’s more to this than just noise assault aand raw attitude, I mean there is obviously plenty of that, but there is a healthy undercurrent of rather soothing left-field alt.pop thought in there as well, some harmony in their focused noise and those rather drilled bass-lines. Those propelling bass lines are the first thing to hit home, although it really doesn’t get truly abrasive until the third track in – Erase Waves is where they really start to demand you scratch under the surface. Harmony is driven by that beautifully relentless alt.rock clang of a bass sound pioneered back in those glorious early Killing Joke days – not as dark though.  Die! Die! Die remind you of someone, someone good, they’ll peck at you in a wired way, they’ll drive, they’ll skewer your mind, they’ll check out that back alley of your home town, that side street you thought you knew about, they’ll implant waves. Not as brooding as killing Joke, more like that pecking-at-you alt-rock sound that simultaneous grew out of the U.S Mid West via Tad and such on the back of post-punk, while at the same tine growing out of the North London backrooms via Scissormen, Homage Freaks, Headcleaner and the rest…

Doing it in their own rather urgent red eye expressed way though, pulling all that post-punk 90’s lurch in to something fresh while throwing lots of almost familiar things that you’ll almost put your finger on without it ever being that obvious about it.  This time Die! Die! Die really sound like someone, who the heck is it? That’s the thing you see, they don’t, they don’t obviously sound like anyone, they’ve just got it running through their veins, ingrained in their DIY driven DNA,  They owe nothing, take a bow, those slightly frantic vocals, the yapping, the early Nirvana-isms, that positive hint of Jane’s Addiction that they’ve almost been caught stealing, not not stealing – no, no one is accusing anyone of anything here, this is good, this is a hell of a lot more that a bit of paint on a shitty fence, no disgrace. Provocation? Just don’t, they really haven’t stolen anything, no, just jumped in the front seat and taking on the job of driving it in their own gloriously wired edgy way, they don’t really sound like anyone, now who the heck is it they sound like?  No need to yell, still scared, still afraid,  just exist there in their flow, flowing so naturally and feeling so right, a changesound changed…

On a roll here now, no phone, don’t ring goddamn it. I’m trying to write a review here! Season’s Revenge is a beautifully edgy way to catch your breath, if the Cure had been a post-rock noise band waiting to pull you apart just a little more that you should be pulled – no scrub that as well, goddamn that phone! Scrub everything that’s been written down on this here page so far, take this review out back and feed it to the rabbits, no one owns a view.  From this point of view, this view right here, right here in the dead of night (when no phone should be ringing) Die! Die! Die! have made a rewarding fresh new album, a album that takes you to lots of places you might feel you’ve viewed before, the view doesn’t look familiar though, and no one owns a view, a sound, a feel. Something different about that view they’re painting this time, provocation? Provocation? Just go, just go, far more than some paint on a shitty fence. Changeman just nails it, you won’t run, that Killing Joke namedrop, it really is meant as high compliment – just the feel, the urgency, that vitality, that knowing rightness that early Killing Joke recordings had, that vital feel that still sounds so fresh. See the times have changed, these are the changemen, change change change. Harmony is a beautifully wired up vital set of slices, and 15 Shades of Blue, is perfectly placed on the thought out album, there just when you need it, a different set of colours, well until the bit just after the start where they take up where they left off again with more edgy left-field pecking at your brilliant mind.

Not saying this new Die! Die! Die is groundbreaking, not saying this is life changing, not saying these sounds aren’t already familiar, not sure that anything musical served up these days really is life changing. So so much good music out there, so so many good bands feeding off each other in so so many creatively healthy ways, so good out there, even if the days of truly groundbreaking records, the records that really did change musical outlooks are way behind us all now, surely everything had been done now hasn’t it, everything new now sounds like something you heard before, the best we can hope for now surely, is just a different way of slicing up this and that? Unless you’re Scott Walker or someone like that right?  Everything has pretty much been done now hasn’t it? Now who the heck does this sound like? Die! Die! Die! Are doing a gloriously familiar thing their own way, and right now their way is sounding very very satisfying indeed, Die! Die! Die! are sounding fresh, they’re alive and while they might not stand any chance of taking anything other than a small slice of the obscure word of mouth musical undergrowth by storm with this fourth album, it is vital that there are bands like this out there committed enough to sacrifice the comforts of life and instead get out there and make beautiful head-pecking records like this – to make  music that for this moment in time, and hopefully a few times to come, provides that vital slice of fresh urgent creative imaginative energy, that clever challenge, that something that’s a little more than ‘product’ to market, a little more than just more stuff.

Harmony just hit the spot, and this being 2012, I didn’t need to write all that long-winded wordery, I could have just said hey, here’s a cool record, you can just hit the link and go make up you own mind if you’re curious enough to, scrub the whole review, cut to the chase here’s the link…  (Sean)

DIE! DIE! DIE! play a one off (free) gig in London, their only remaining UK date od a European tour that’s happening now, at the OLD BLUE LAST in East London on November 22nd. Chain of Flowers and Playlounge are also on the bill