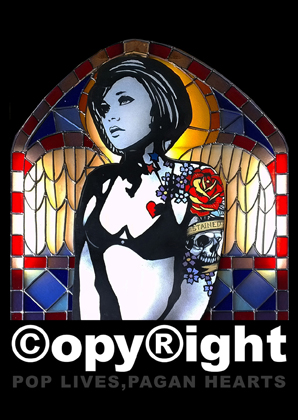 Things things things, where were we? Half way down Vyner Street when the Montana started to kick in again, Mr Wilkinson looked on distastefully, Nettie had long since tossed her nose in the air and declared she didn’t like the type the street was attracting these days, the man in the corner was busy counting up his pennies and never opening his doors, the money from his latest salon was in so why bother with the inconvenience of opening on First Thursday, ever get the feeling you’ve been cheated?  One day we will tell it all, for now here’s a thin, or maybe some things? Don’t know yet, making it up as I go along today, never really meant to start all this Organ baiting yet again, been there, done that, cut the crap, cut to the chaise, throw out some things.  Well now, things you say? Slick stencil artist COPYRIGHT has a show of bold bright poppy work opening at PURE EVIL gallery tomorrow night, 108 Leonard St, London EC2, is where you find it all, nothing evil, lot of things pure, always good, one of them galleries you can trust if you like your art served up streetside and smelling fresh. POP LIVES, PAGAN HEARTS is the name of the ten day-long show,,,

“Pop Lives, Pagan Hearts is Copyright’s 2012 solo show and sees him exploring the pop elements of his work the bright colours and repetition, but combining this with mythological narratives at the same time. Copyright discussed that despite our confidence that we are on the cutting edge of science and technology, living in a modern cultured world, that generally speaking all our belief systems be they religious, moral or superstitious are rooted in ancient times. “You may think you’re the coolest kid on the block with your latest iPhone and AF1’s but if things go wrong it won’t be Apple that you’re praying to.”

Meanwhile BEN FENTON has presented us with a new piece, a new painting, oil, PORTRAIT FOR THE MAN THAT DIED (HENRY RALPH LUMLEY), the piece will apear next month at the ART IS FOR LIFE, NOT JUST FOR CHRISTMAS show that opens at CULTIVATE, VYNER STREET on Thursday December 6th. Before that we have the PRIMARIES show and everything turning red, yellow or blue, I say we because this is an Organ=associated gallery.  Ben Fenton is from Rye, Sussex, or at least that is where you find him living and painting and such right now.

“Ben Fenton’s paintings can be found in private collections all over Europe. He paints stunning, vibrant and intimate portraits, taking details from photographs that capture a lost moment, and encapsulates the true character of the subject.”

“Artist Ben Fenton, originally from Dungeness, has forged out a successful career in London for more than 12 years, but wanted to return to the Romney Marsh to get away from the distractions of living in the capital and seek new inspiration and challenges for his work….”

I’m off, yellow paint to throw before Primaries opens, have some Zs