CHARLIE INMAN went to Rio to make a film for VERY NEARLY ALWAYS….

“I went to Rio to make a film about Samba and got a little sidetracked by the amazing Graff scene out there, so I decided to make a little film about it. One million thanks go to Airá O Crespo for showing me the way, to Toz and Dudu for meeting up with me, and to Bibiu for giving me a ride, Aninha for coming along and helping out, BOSH for the time off, and to all the writers of Rio for being such a lovely welcoming bunch. Bigup your chests. You are all dons”.

MEANWHILE The JIM JONES REVUE got ready to drop a new single….

Where Da Money Go? is the second single off The Jim Jones Revue latest album The Savage Heart. The track is released on the 24th December.

A while we’re in a Brazilian mood, here’s a short film of Brazilian graffiti artist CRANIO‘s first visit to the UK for his solo show Lost in London that happened last month with ZERO COOL down in London Bridge….

And over on the East Side of London, down Vyner Street, time for another organised, FREE ART FRIDAY……

Of course, as we said here the other day, the idea of leaving free art on tops of walls has been going on for years, none of this is new, it didn’t start with a Facebook page or two, art left on seats of trains, outside galleries, inside galleries, in phone boxes, on buses, in trees, anonymously at times, details on the back of work on other occasions, the notions of shared creativity, of someone finding a piece of art, taking it home and just enjoying it, 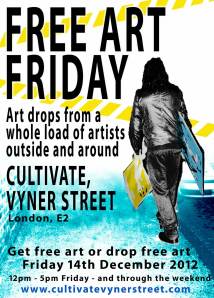 The idea of making a piece of art and just leaving it for someone to find… The idea of free art for some now comes with the added layer that is social media, is that a good thing? where is the art? Who found the art? Who leaving what where today? For years it was Thursday, Thursday is now Friday, Friday is any day, it all naturally evolved, there are no rules, there are no leaders, no one started it, it all just started, it just naturally evolved, people joined in, communication is good, sharing is good, the idea of free art will always be a good one, Sometimes it comes with a little bit of organisation, an announcement of a place to srop art, sometimes it doesn’t, there are no rules…. free art whateverday.

a 2011 Free Art event at Cultivate

Here at Cultivate, the gloriously messy artist-run gallery space brought to you by the makers of Organ, we’ve held a numver of Free Art events, people seem to be forever dropping off free art anyway, we really don’t need ot say so anymore, it is nice to organise a more formal event now and again, and so that si what we plan to do this coming Friday 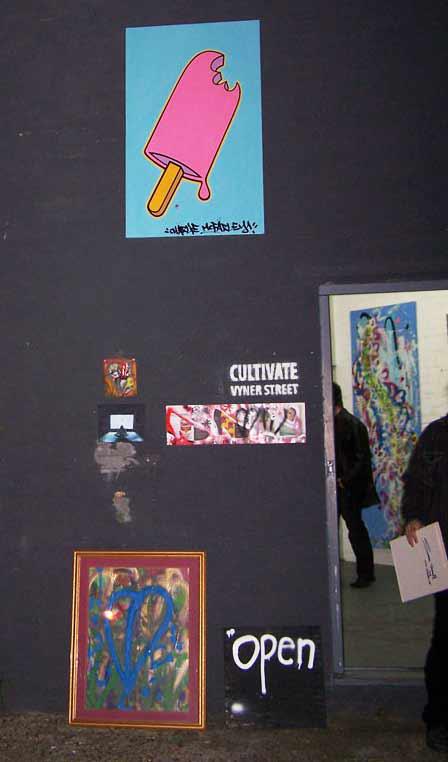 FREE ART at CULTIVATE, 2011, including a large CHARLIE McFARLEY lollipop canvas, and a big blue Leafheart….

And here’s how FREE ART FRIDAY is looking in DETROIT this week…. “What is Free Art Friday? Here’s everything you need to in a  video produced by Emily Morman.”

A piece of LEWIS BANISTER free art at Cultivate, Nov 2011

More of this tomorrow…. probably…