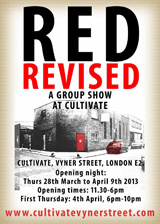 Things> No time again, things things things, go listen to some classic rock ‘n roll while things are cooked up, I got red things to paint, exclaiming to do, daffodils to feed,  official looking men in suits with clipboards to fight off, that and bad artists who won’t take no for an answer.  Have you heard that sound, that slamming door? Got some KAYO DOT words from Mr Driver here somewhere, new album, news in a minute…

First, last Sunday’s OTHER ROCK SHOW for those who missed it when it went out live…. happens every Sunday, 9pm UK time, 104.4FM in London,  on line worldwide via www.resonancefm.com, Marina Organ in the chair…. the blue chair actually, yellow walls….down by the river, London Bridge,,,,

And before we g oany further, a serious moment, right now it is more important than ever to be creative and to share that creativity.

“Our kids are being prepared for passive obedience, not creative, independent lives” Noam Chomsky –

“Hello everyone! I feel like it’s been a while since I’ve sent one of these. A lot has happened, but I want to keep this message focused mainly on one thing – the new and forthcoming Kayo Dot album! 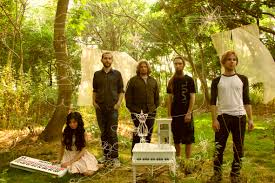 Basically what’s going on is that we’ve been working on an epic double-album prog masterwork. I’m pasting the press release below so you can read all the details and trade it around, post it on your blogs (if you would be so kind!) and all that. We think this is one of the best things we’ve ever done, honest. So, we’re incredibly excited about it. It’ll be our first pro studio album in a few years’, too… the last two were more or less home recordings due to budget constraints. So, the pre-order is really what’s going to make this possible for us or not – therefore, if this is something that interests you, please place a pre-order now! We need to sell a bunch of these before the beginning of April… crunch!!! Check out the press release below.

And, since we’re running a new preorder for Kayo Dot, I also wanted to anticipate any questions about the Ichneumonidae DVD and record that we funded last year. If you’re not on my facebook or missed the post, the music part is totally finished – there are some samples from Ichneumonidae up at this soundcloud link: https://soundcloud.com/tobydriver/sets/ichneumonidae-unmastered-clips . And the film portion is still forthcoming. I hope the audio clips can tide you over until we are able to make that happen.

FOR IMMEDIATE RELEASE: Boston-born, and now New York City-based veteran avant-metallers KAYO DOT, led by Toby Driver, are set to hit the studio for their 7th album, Hubardo, this April. This album will mark the 10-year anniversary of KAYO DOT’s debut and landmark release, Choirs of The Eye, and the band will trek out to Avast Studios in Seattle, Washington, with producer RANDALL DUNN (SunnO))), Wolves In The Throne Room, Black Mountain) returning to the helm.

Hubardo is an approximately 90-minute conceptual epic double-album, with story and lyrics written by longtime lyricist and former MAUDLIN OF THE WELL vocalist, Jason Byron. Musically, the album covers the spectrum of all of the band’s works, from the sparse doomy elements of Choirs of The Eye, to the blast-beat, woodwind-driven Gamma Knife, the chorus-bass goth fusion of Coyote, and even lush orchestrated prog moments harkening back to the days of their previous band, MAUDLIN OF THE WELL, and, as with all the band’s releases, Driver and Co. venturing into new territory. The album sees a returning cast of characters with Toby Driver on Bass, Keys, Guitars and Vocals, Terran Olson on Keys and Woodwinds, Daniel Means on Woodwinds and Synth, Mia Matsumiya on violin, Tim Byrnes on Trumpet and Horn in F, the first proper studio recording with Keith Abrams on drums, and the first recording contribution of longtime live collaborator Ron Varod on Guitar. Hubardo will also feature a very special guest vocal appearance by Jason Byron – his first recorded appearance since MAUDLIN OF THE WELL’s 2001 albums, Bath and Leaving Your Body Map.

This album will be self-released on the band’s own imprint, ICE LEVEL MUSIC, and pre-orders will be taken to help fund the recording and travel costs. Pre-Orders will be offered in 3xLP Deluxe, Standard, and Digital-only editions, featuring limited 200g colored vinyl in a triple gatefold (6 huge panels of artwork), a 5-chapter poem by Jason Byron entitled The Sword Of Satan, signed poster, T-shirt, guitar pick, and sticker.

The Pre-Order system is now LIVE at http://kayodot.bigcartel.com and the records will be limited to 300 copies for the Deluxe Edition and 200 copies for the Standard Edition. Hubardo is slated for a fall 2013 release to coincide with Kayo Dot’s tenth anniversary.

Thanks for reading, and for your continued support!

None of the music from the new album as been unveiled yet, here a taste or two from previous times….

The band began to record their crowning achievement late in 1970: a musical adaptation of the biblical Book of Revelation, entitled 666. Silver Koulouris, having finished his Greek army duty rejoined the band. However, relations between all the band members were not good at the time, and continued to worsen during the album’s creation.

Essentially, 666 was Vangelis’ concept, created with an outside lyricist, Costas Ferris. The music that Vangelis was creating for 666 was much more psychedelic and progressive rock oriented than anything the band had done before. This did not sit well with the other band members, who wished to continue in the pop direction that had brought them success. Furthermore, Roussos was being groomed for a solo career, and recorded his first solo single “We Shall Dance” (with Sideras on drums), and his first solo album On the Greek Side of My Mind, whereas Vangelis recorded the score for L’Apocalypse des animaux and worked on a single with his girlfriend Vilma Ladopoulou, performing with Koulouris using the pseudonym “Alpha Beta”.

By the time the double LP 666 finally came out in early 1972, and having sold over 20 million albums[2], the band had already split. Both Vangelis and Demis Roussos pursued successful solo careers, Roussos as a pop singer and Vangelis in electronic music. Koulouris worked with both on occasion. Loukas Sideras pursued a less successful solo career, releasing an album and the single “Rising Sun” after the break-up”