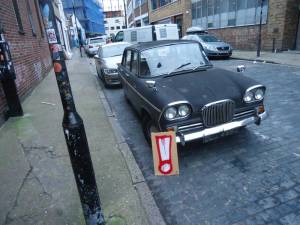 Fings, things, carnivorous things shooting out of the ground, and you just can’t escape from the sound .Spice, Ice, dance, chance, sickly grin… mouth dry, tongue tied, broken chair.   A thing of the day? Get it from the supermarket, all conveniently frozen, earfood, eyefood, catfood….Where were we? Evolving Cultivate as a creative space…. Meanwhile down at the Southbank artistic creativity and culture in being destroyed by a bunch of coffee drinking suits and skirts.  Art spaces being turned in to coffee shops, artist-run spaces being closed by property developers,

“Long Live Southbank presents our educational campaign film Revelations of a Cultural Vandal which introduces the aggressive and deceiving campaign the Southbank Centre have employed beyond the glossy Festival Wing brochures.

On 3rd December 2013 Southbank Centre security tried to stop people from photographing the the Southbank Undercroft while it was ‘closed for maintenance’ a timely 6 days after the Southbank Centre re-submitted their Festival Wing plans which still feature the destruction of the iconic cultural landmark in favour of retail units.
To object to the plans go here:
https://www.surveymonkey.com/s/9DNCRKK

Stopping filming and photography of the self-titled ‘world class’ art and cultural institution is not an isolated incident.

Ironic in the least when you consider that the skaters and street arts are the most publicly filmed and photographed aspect on the Southbank Centre site.

There is a Southbank Centre they do not want you to see, but it is very real. We believe they will try and get this film taken down – they have done that before.

On the same day the Southbank Centre asked Lambeth Council for more time to review if their scheme “is achieving the very best balance”.

Yet the Southbank Centre once again failed to consult the artistic and local communities honestly and effectively and continued to ignore mounting public opposition to the plans.

On the 26th November 2013, the Southbank Centre submitted an only-slightly amended planning application – which still retained the infilling of the irreplaceable Southbank skate spot – despite over 90,000 people and rising signing up for its preservation, and it being the most talked about and the most controversial aspect of the scheme.

They also submitted plans for a new space they have titled a ‘skateable space’ that on closer inspection is actually a new programmable space for the Southbank Centre to be used by them for any purpose they see fit. In an “undertaking” given to Lambeth Council, Southbank Centre say that they will reserve the space ‘for the provision of arts and cultural events and activities, including use for commercial purposes and artistic rentals, related to the Owner’s programme of events and income generation as a centre for the arts.’

The Southbank Centre has reveal itself as a secretive institution willing to mislead and lie in order to achieve its aims. This has been the most alarming aspect of the 9 month campaign. It is very worrying to think an institute of art and culture, which keeps reminding us it is a ‘charity’, has adopted secrecy and an aggressive campaign of bullying and intimidating young people, while at the same time using the ‘education’ of children and young people as its selling point to reach its own ambition.

London’s skateboard community and our supporters have campaigned every single day for the preservation of Southbank (Undercroft) since the Festival Wing plans were first revealed. The result was unprecedented public support – from all walks of life Something the Southbank Centre has failed to achieve. 66,000 petition signatures for preservation and 90,000 LLSB members as opposed to the 5,000 supporters gathered by an institution with limitless time, staff and resources. An institute that at one point placed a pen and support form on every seat of every event and even took to the stage pre-events (and often were booed)*.

Our support continues to grow daily.

This is not about denying the expansion of access to culture, this is about the questioning of the integrity of archaic hands that seek to stifle and silence culture.

We are the voice of young people who stand for the future of artistic and cultural expression in an ever-changing world, for everyone. Not on paper, but in practice.

‘The future is in the eyes of the young, and not the minds of the old.’ LLSB”

Fore more information on the real story and to sign up and get involved in preserving a unique and vital part of London culture:

To object to the plans go here:
https://www.surveymonkey.com/s/9DNCRKK

This is a spoken word piece by London poet E.V.Somerville, a response to government plans to destroy the truly unique and historic skate park at the undercroft on London’s Southbank, which has been a beautiful space since it’s organic origins in the 1970’s when the abandoned space was adopted by skaters and other young people.

She says, “I feel really passionate about this, which is why I wrote this. But I’m not the only one who loves this place, and values it above yet more coffee chains and shops which are set to replace it. People come from all over the world to skate at Southbank or just to watch. Please sign the petition, post about the campaign on your social media, create any art in support, join the campaign, or get involved however you can to save the skatepark. LONG LIVE SOUTHBANK”

Disclaimer from LLSB: “The Southbank Centre have been very unclear as to which retailers will occupy the space. They have stated incorrectly that LLSB have been misinforming people that it will be a ‘Starbucks’. Any views expressed are that of a creative license of a third party and do not necessarily reflect the views of LLSB. Remember though, Southbank Centre have been very secretive about who and what they actually have planned.” 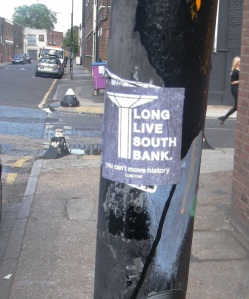 And for  what it be worth here, those of us who might be viewed by E.V Somerville,. by the skaters, by the “kids” who use the space as just being “old-folk” involved in elitist “highbrow art”, those of us who spend their daytime hanging contemporary paintings on gallery walls and their evenings at private viers, those of us who have never been on a skateboard in our lives, those of us who might have already seen half our lives flow by, those of us who do also go to the Southbank for the Tate or to partake of a classical performance at Southback Centre,  or who already enjoy  a coffee in the many places we already have to drink coffee (or indulge in retail) within the beautiful concrete brutality of the glorious building that is the current Southbank Centre complex, we ALL love this place as much of the skaters do.  We love the energy, the creativity, the excitement, the ever evolving walls, the friendliness, the spontaneous beauty of a place that doesn’t need to be formal, doesn’t need to be curated, doesn’t need to be organised or programed.

The Southbank Undercroft is  a very special place, it needs to be celebrated not destroyed, you can’t move it, the magic is those walls and on those floors. This space and those walls are as important in terms of “highbrow art” as they are in terms of “alternative culture”. Painters, artists, gallery owners, we are all skateboarders, long live Southbank..

2 thoughts on “ORGAN THING OF THE DAY: LLSB – Southbank Centre: Revelations of a Cultural Vandal”