Where were we? Still halfway towards the notion of a race in the desert or some mint Julep or four hundred other things infested with the red bats and 160 billion tons of ice lost in the last hour or something? Meltdown is coming, never mind that, have some music and stop asking questions.  Monday Monday, just another day in the sunshine and the noise of East London.  Check out Tosserlad twittered Bev, who are Tosserlad Bev? Who’s Bev come to that? Don’t ask us, we’re busy frying eggs on the pavement and throwing paint at debt collectors while it all crashes and burns in a pile of used vinyl being made ready for a car park and our annual rendezvous with Tracy, Gavin, Bob, Roberta and Peter.  Who are Bob, Tracey and Peter? You know well who they are, and getting an invite to take part in the events in that car park is not something to take lightly, they’re very picky about who they invite you know.   Video for Tosserlad’s F.O.M.O off The “Make Me Sick” EP then, check it out while I go find some links for you…

Tosserlad are apparently from Leeds…. “Tosserlad were formed in 2012 by the 4 cleverest men in Leeds as an excuse to go to “Booze Bin” more often. Then Rob moved to London which wasn’t very clever but he does work in TV now. Songs were written with a gritty down to earth realism inspired by everyday issues faced by mankind throughout the course of human history; annoying dogs, unreliable plumbers, getting smashed on White Lightning and eating so much Vindaloo you shit yourself, all have been tackled head on by Tosserlad. Coupled with songwriting talent and musicianship second to few, Tosserlad have crafted their sound, taking in Punk, Hardcore, Thrash, D-beat and a good dose of Motorhead style rockn’roll because lets face it, everyone f**kin loves a bit of Motorhead”

Never mind no Motorhead, or no used boots and panties or bands with self-ridiculing names, never mind no nothing. This looks like it might be interesting this coming Tuesday evening, what d’ya mean, this is already Tuesday?! Told you Monday was a busy day, no time for this Organ stuff.

Opening this Tuesday evening at the big Wilkinson gallery down at the bottom of Vyner Street, Bethnal Green, East London (and running from 21st May until 29th Jun)  is a show from widely exhibited New York artist LAURIE SIMMONS.   Well that pink image right there has us curious and Wilkinson Gallery, whatever else we might say about it, is a fine fine space in which to reverentially (peacefully on any other time besides the opening night) view art,  Now if only they were a little bit more friendly and inviting and didn’t make you feel like they didn’t want you in their nice big white cube of a gallery.  Do like that space, do like the space and the space it allows an uncluttered exploration in peace and quiet. I do like going in to Wilkinson

Meanwhile a little further up Vyner street at Cultivate, things are a little bit more energetic, a little more cramped and you might say somewhat anarchic. You’d be right to say all that, but needs must, make do and mend –  the little corner room is not a space that can be treated with reverence, no no no, Cultivate is based in a gloriously messy space that demands energy, contradiction, confusion, confrontation…. might be an idea to clean the windows soon though.

Used (What julia Made)

For June (for June is nearly upon us), part of Cultivate will be taken over by Julia Maddison for a month, here’s what Julia has to say…

.
“I’m putting together a wall of art for Cultivate Evolved, the small and often surprising gallery in Vyner Street. I am collecting together (I hesitate to use the word “curating”) pictures, words, objects, flotsam & jetsam along the theme of Used Boots and Panties; think the Ian Dury album, then a bit more sordid. If you’d like to take part in an entertaining, hopefully thought provoking little show which will open with all the jollity of a summer East End First Thursday, please get in touch. Things, photos of things, written memories of things, shopping lists, sculptures, old pants, paintings, drawings, tights, maybe a performance (why not?), the works…” 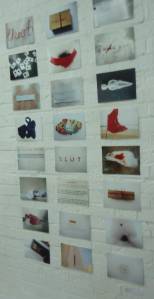 .
Julia and her used boots and such will take over one wall (and probably bits of the ceiling and maybe a plinth) for the whole of June from First Thursday June 5th. The rest of the gallery will be taken up by the ever evolving walls of work from our current slew of in-house artists – MOB, JESSICA BALLANTYNE, QUIET BRITISH ACCENT, SEAN WORRALL, EMMA HARVEY and the unused art of JULIA MADDISON as well as our guest artist BENJAMIN JENSEN taking up one of the guest wall spaces. And the other guest space, well watch this space…. More news tomorrow, we’re cooking up a few things…

All change again this week in terms of the guest space. We say goodbye to London-based Brazilian artist ROMEN GOUVEIA and his bold reds, his photographic manipulation of guilty pleasures and such. The large piece has been enjoying a lot of positive attention there dominating things in such a positive way, a really strong piece hanging there in the middle of the gallery wall over the last two weeks.

We shall have more news tomorrow about the next guests, that big Alo piece we saved from the builders skip, maybe something about Bakewell art tarts, and the line up of artists joining us for the Brick Lane Art Car Boot Fair. …

hang on, this is Organ, not the Cultivate blog, get out of here with all this cultivation and …. have some Trash Boat…

TRASH BOAT claim have released a single today (well yesterday now seeing as you insist it is now Tuesday – actually, if you want to argue, then the  time right now is just south of 2am and I haven’t been to bed yet, therefore it is still Monday), and they, they being “Hertfordshire pop-punks” Trash Boat, have released a single or a track or a mongoose or a strange invasive crayfish or a new song on a pay what you want basis – a download thing. Hang on, no, never straight forward these days,  there was a time when you got a cassette in the post with a photocopied press release telling you there was a new single coming out next month, now people send e.mails claiming they have  “dropped” songs ahead of downloadable releases, dropped a downloadable release ahead of a downloadable release…  whatever the score, here it is, a new song from Trash Boat ahead of their debut EP that they plan to drop sometime at the start of next month. You might say that Trash Boat are just another generic punk pop band like a million an seven you already heard, and you’d probably be right to argue that, but they do have a certain something in there, a touch of personality, an edge of quality, a decent song, some emotion, some hint that they’re not just churning it out, they they want to do a little more than ape their heroes, I like this, and why not? You might ask what the hell have to do with any notions of punk, you might say so what, whatever you might want to ask or say, here is is, make you own damn mind up and stop asking me things! Have you any idea what time it is?! I need sleep, what the hell were Crass ranting about anyway, where’s my bed…

More of this tomorrow, or later today, or the day after whatever day it is now…