So, our man Stik, I’m hesitant to call him a street artist now, well he obviously is, but he’s far more than that now though, and anyway, isn’t the notion of a street artist in London rather devalued by most of the churning it all out by numbers and the following of the rules that’s going on?  Stik is an artist, an emotional artist, he’s a painter who matters, an artist for these tough times most of us are enduring, a human heart in a city that is forgetting to care about its people   Stik has just finished creating what is said to be the the tallest piece of street art in the world, a thirty-eight metre high mural, Big Mother, on the side of a condemned council tower block in Acton, West London. The piece is currently being celebrated all over the pages of those who document the art of the street, and rightly so (we make no apologies for being the 47th blog to cover this today, this is a bold piece of to celebrate and shout about), if the humanity of the painting doesn’t warm your heart then it might be that your heart is no longer beating (or you’re one of those dog-eat-dog estate agent property developers who couldn’t care less about anything besides how much money you can make out of other people’s misery). Stik is an important contemporary artist, he is of our times, and yes, he is “our man”, he’s one of us making good and not forgetting where he’s come from.

Stik’s art may command .top dollar these days, but he’s still out there painting for everyone. One of the great pleasures of running Cultivate and having a street corner gallery with an always open door over the last three years has been the pleasure of locals coming in, locals who would constantly tell us they didn’t feel welcome in most East London galleries, how they felt intimidated by closed doors and unfriendly attitudes, we’d get all kinds of people coming is and talking to us, old ladies who have live around here for years (they have some great tales to tell), bus drivers on their way to the bus garage up the road, all kinds of people. One of the regular subjects was “those stick figures on the walls”. Most people had no idea who Stik was but they’d regularly enthuse about how much the “stick figure” paintings on the walls at the top of the street on the big yellow doors of the flower market on Cambridge Heath Road, or high up on the chimney stack on Mare Street made them smile. We had one old lady who would come past most days and tell us she deliberately walked her dog past his work because it made her feel happy when she was down – “most of you lot are nothing but vandals” she tell me if she founds me outside Cultivate with a can of spray paint, “but I do love those stick people”.      .

Big Mother is what you might now call a typical Stik image, a bold mother and child looking forlornly from their council block at the luxury apartment complexes being built around them. The mural is visible from not only the Piccadilly Line, but also on some London flight paths.  Stik, who was once homeless himself, and who has strongly support things like Big Issue in the past, said: “Affordable housing in Britain is under threat; this piece is to remind the world that all people need homes.”  The bold piece of work has been painted on Charles Hocking House on Bollo Bridge Road, Acton, West London, a tower block originally built for low income families back in 1967, a tower block now earmarked for demolition as “affordable” housing become less and less affordable

We’ve loved watching Stik’s figures grow as he’s established his distinctive style. His figures appear all over the globe these days, now and again you can still spot an early piece on an East London wall, like the ones in the garden at the top of his Hackney home turf, they look delightfully primitive now. We like seeing a new Stik on a building, where there’s a Stik, there’s some hope.

We like Stik, we like he’s work, we like how he’s using the voice he now has, we like seeing those figures up on the wall. Such a shame the one on the Mare Street Chimney that stayed up there through the cold of the snow, the baking sun, the glorious sunsets, the wind and the rain was removed. Spoke to the workmen as they were being made to remove it by the building’s new owner, they were so upset to have to do it, ironically the new owner was doing up the place to open it as a rather gentrified arts venue, well they said arts venue, another expensive coffee shop that none of us can afford to eat or drink in is what it really is. We tried to tell him at the time, tried to tell him it as a much loved piece of art, owner insisted it was nothing but a bit of vandalism (bet he’s kicking himself now, he must realise by now?). The removal of that Stik in the sky, one of his most enjoyed pieces, a piece that looked down on Hackney, sums up a lot of what’s wrong with London right now as art and creativity is pushed aside, as people are pushed aside, priced out, as the mothers of E15 are being evicted, as creativity is being strangled, as the people who simply can’t afford to live around here anymore, who can’t survive, as people are being left behind or forced out, that removal of the Stik from a chimney on a building that claims to be an art venue, sums it up… 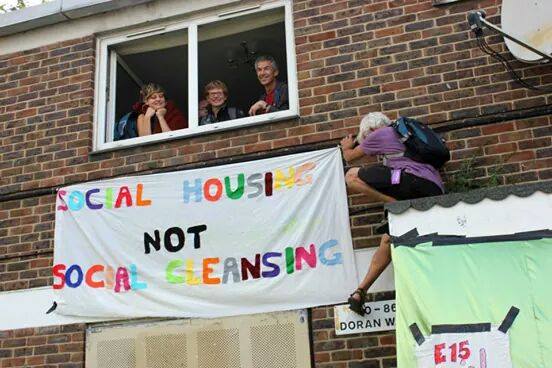 Grayson Perry had some interesting thoughts on gentrification, the destruction of community and creativity, in a piece in The Independent last week, “London needs affordable housing because ‘rich people don’t create culture”, he argued. Gertrude are creative people, there’s creative people, then there’s the coffee drinking people………

Meanwhile, over in East London, mothers are being evicted, London’s own are being pushed out, people are making a stand, fighting evictions, picketing courts, fighting bailiffs. Gertrude are a rather forthright band, a band of activists, a committed band of do’ers, a brilliantly empowering band actually – an excellent band, a feisty band. Gertrude have just put a rather fine compilation album together, the album is called Songs About Women in the 21st Century – Gertude and Stik have a lot in common, Here’s what Gertrude have to say about their album…

“Musicians rose to the challenge set by the band Gertrude to submit a track about a woman in the 21st century. The result is an eclectic and vibrant compilation album, offering a variety of feisty garage punk, electronica and folk , as well as a dash of street poetry”/ More over on Gertude’s blog.

You can download that compilation for free via the the Bandcamp link just there. Gertrude who are a band who’s music stands for something, Stik is an artist who means something, right now creativity is more important than ever.  (SW)

Stik on the Sky on Mare Street (2012), Stik as the Flower Warehouse (2014), Cambridge Heath Road, London, E2, Stik on the re wall in Nottinghill (2009) and more (click on an image to enlarge or run the slide show), Stik on that Hackney garden wall, Stik in the Mile End lake….

Stik in the sky, Mare Street,

Stik in the sky, Mare Street,