First Thursday in East London, is it still on? is it a thing of the past? A once glorious event now, like so many aspects of London’s rich artistic culture, a thing of the past? From what we’ve seen over the last few months, the once very exciting Monthly event is at best a mere shadow of that once great thing it was. The twin focal points of Redchurch Street and Vyner Street now hanging on by a the threat, property developers, gentrification, spaces being closed (that and the stench of underhand spin from those developers and space grabbers who hide behind the wordy mask of an alternative – beware those who talk the talk and claim to be about the art and the community as they take over the spaces, lock the doors of once thriving galleries and plot blocks of flats and lime flavoured hotels in their place. Beware the press releases, Ted Talks and Twitter feeds that celebrate themselves). One year ago March First Thursday was a buzz of art down Vyner Street, the place alive with people, with spaces of all shapes and sizes, a dozen galleries and pop up events, and two years ago even more so. Now you just have Wilkinson stranded like a (very unfriendly very unwelcoming) bloated beached whale and little else besides the sad sight of locked buildings waiting to be torn down, that and front street gallery spaces turned in to offices for soulless internet art selling operations that want to sell you art to match your curtains and your latest pair of expensive shoes….

Today is not the day for all that, nothing lasts forever, today is a new day, got to keep on keepin’ on, the White Chapel Gallery people may have taken it all for granted while it was still there, enough of these barbs…. .

First Thursday in East London now is petty much like any Thursday of the months, no big street gatherings and clutches of spaces all open together now, but this is still East London and there are still spaces scattered about, hanging on, popping up, there are still spaces to explore, mostly commercial galleries now, the excitement of artist run spaces and events have been priced out, but there are things happening, but there are spaces to explore. Tonight we shall be heading off to see what we can find, hopefully we shall encounter a few things as explore,,,, 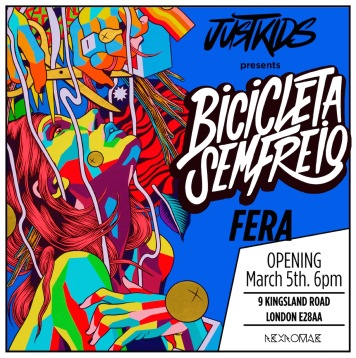 The first port of call tonight will be the opening night of the Brazilian street art flavoured duo Bicicleta Sem Freio’s  first London show, we previewed that show a couple of days back here, you find it happening at the Hoxton Gallery, Kingsland Road, E2      “JUSTKIDS will hold a pop-up exhibition in London showcasing the artworks of internationally famed Brazilian duo of illustrators Bicicleta Sem Freio (“Bicycle Without Brake”). Curated by Charlotte Dutoit from JUSTKIDS, the ephemeral exhibition will be open to visitors from the 5th through the 8th of March”.

The Sam Peacock show at Curious Duke looks interesting…. Here’s what the gallery has to say….

Rugby born artist Sam Peacock, 38, from Wimbledon in South London exposes the bare facts of hydraulic fracturing for shale gas, more commonly known as ‘fracking’, in an alternative art form. The controversial subject of fracking can be difficult to orient, but we want to ask, what does fracking mean to you? 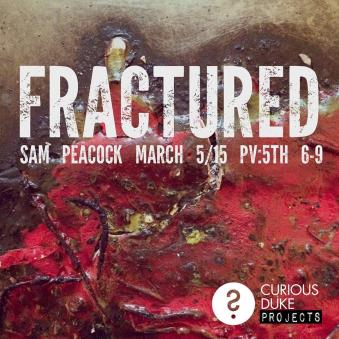 Sam Peacock’s Fractured collection arose after hearing that his hometown of Rugby was marked as a potential fracking site. What would become of the town in which his family lived and worked? Peacock was concerned and set about learning the facts about hydraulic fracturing and its consequences if a license was approved. The landscape painter explains that “Hydraulic fracturing was happening near Rugby, with companies ready to set fire to a coal field that would release methane that would pollute the ground water.” This ignited the artists’ imagination to delve underground; the idyllic spread of countryside was about to have its natural balance altered, causing Peacock to fracture his own creative process.

Peacock notes that his 52 art works that make up the Fractured series “seek to create debate”, hence, laying out the possibilities of hydraulic fracturing for you to decide what fracking means to you. As Peacock’s sole representative, Curious Duke wanted to learn more about this controversial process. Founder Eleni Duke decided to host the artists’ explorations, saying that “Art history has always been laced with art that conveys a social message; it is important that we continue to use art as a medium of debate and conversation.” Both sides of fracking need to be discussed, and now! With the UK running out of natural resources, hydraulic fracturing has been championed as the new energy, as we struggle with storing wind and solar power. Fracking produces 300,000 barrels of energy a day with one Well being processed up to 18 times making it an economic argument, but always countered with the environmental and the fear of potential dangers. This March, Curious Duke Gallery will wade into the conversation hosting both parties in Fractured.

More later when we’ve explore First Thursday and what East London has to offer tonight that and dropped some more 365 pieces….. here, have some more soul, be careful not to spin in your small studio, paint is easily spilled  (SW)