Some things, some improvised things, some esoteric things, some signposts to take you to other places and the words of other people, places and pieces before they get knocked down again (thehippiesnowwearblack is always an interesting place to explore that world of the extended Crass family).

Trestle Records are out Thing of the Day today, the Trestle collective are doing all kinds of interesting things over here in East London.

There some rather beautifully uncluttered flowing improv here, colourful use of the space in between sounds and an understand that less really is so often so much more, some very expressive inviting accessible easy-on-the-ear music that never ever feels too awkward or unfriendly – improvised music that invites rather than confronts…

Apparently, there is a second in an ongoing programme of curated, one day sessions of improvised music taking place at a studio in Netil House Hackney, musicians are invited to collaborate in a days recording with players that may be meeting for the first time that very day. The principle is to facilitate a supportive environment with which to allow the invited artists to experiment on a record made in a day.

The sessions will appear, free to stream, on www.trestlerec.com, with an ongoing regular programme of new bands/collaborations. The recordings will be a representation of the live tracks invented on the day, with only minimal post-production / mixing.

As well as including artists already associated with Trestle, we will be inviting guests to contribute to the experiments. The second of which, now available on the website, features James Daoud on Guitar & Laptop, Nick Siddall on Guitar & Synth and Dean Valentine Smith on Drums & Keyboards.

A little taste of the intriguing world of Trestle, for further information visit  www.trestlerec.com  Trestle records is a record label dedicated to putting out new instrumental music started by four friends in east london during 2011. Ranging from electronic to classical, pop to musique concrete supporting and distributing all manner of contemporary instrumental music is its principle. 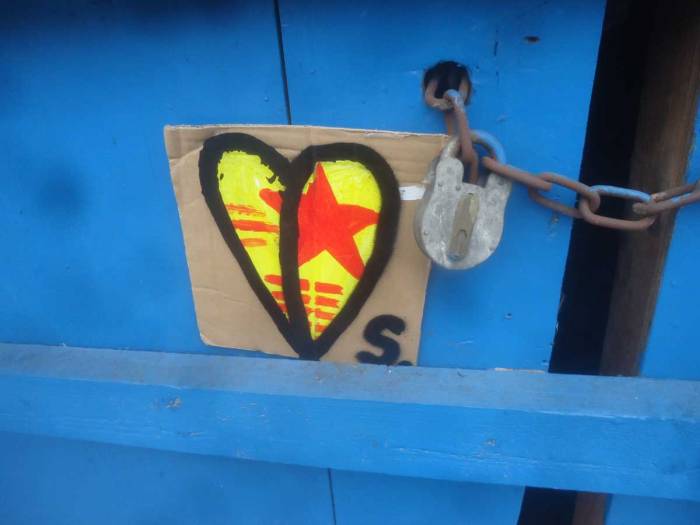 Ron Athey on London performance artist Amy Elizabeth Kingsmill  – ‘Welcome to the new esoteric theatre. Its not minimalist and its not maximal. Meaning a costume drama without sets.The iconography – yes archetypal – is pumped to cartoon colors and graphics. But the speed, the intention, is pure luxury. Amy Kingsmill straddles cabaret/trance/spectacle and infuses the space with exuberance.’

And before we go, this via The Hippies Now Wear Black, “Filmmaker and former Chumbawamba member Dunstan Bruce has launched a funding bid on Kickstarter for new documentary project I Get Knocked Down (The Untold Story of Chumbawamba)”.