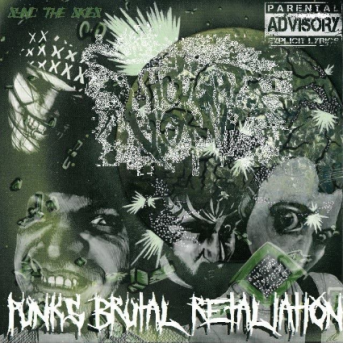 Thought vomit? That about sums things up, shall we indulge? Shall we actually write an actual proper album review like we did all the time back in thee days when Organ and music reviews in general actually mattered? indeed we shall….

THOUGHT VOMiT – Punks Brutal Retaliation/Sync The Skies  (self release)  – “ Sonoma County thrashers Thought Vomit stand in the forefront, flying the black flag of resistance in step with the malcontents of the world” so say the press release. Now where the hell is Sonoma Country? Could be anywhere really, I know Buttf**k is in Montana, never heard of Sonoma Country? They sound like some band you’d find half way down a ten band bill at the Birmingham Hummingbird or the Hammersmith Clarendon, you know the sort of thing. on a bill with Concrete Sox or Civilised Society or one of a million glorious bands who thrashed their way through a the crustcore thrash metal infused punk rock crustcore photocopied tape-trading zine-powered word of mouth soap-on-a-stamp wastelands of the late 80’s.  Thought Vomit have a North American take on it all of course – same shit, different continent, and yes indeed they do blast like a thousand half-arsed punk bands you already heard too many times. Diluted Discharge (capital D) you might say, all speed metal anger and flip the system and them and us and gloriously generic, brilliantly so, every town should have a band like Thought Vomit defiantly self-releasing albums than no one much is going to care about, brilliant, love it to bits, vitally good…. oh hang on, they’ve got to the moody duet now, I’m out of here, pass the Scrap Metal and fire it up, how many times have you heard them say that they didn’t want to go to work today…….. . gloriously good, awfully so, Thought Vomit indeed….

Here, have some glorious Civilised Society and some classic Organ fuel from back in 1986, back when it all started….

“Hey all,  Hope you are well! Just a quick one here with a new album I am working on from Monotreme Records (65daysofstatic, This Will Destroy You etc.). It’s the new record from STEARICA frontman Davide Compagnoni called KHOMPA. The whole album is played live on drums through an adventurous mix of drumming, electronics and cutting edge drum triggering technology. I’d love to hear what you make of it, and I would be delighted if you think this might be one that you might be able to review….”.

KHOMPA – The Shape Of Drums To Come  (Monotreme) –  Well I guess his fellow musicians might get excited, and the video kind of adds to it, the visual as stimulating as the audio and such, but hey, I’m letting the album do the talking here now rather than one tracks and a visually stimulating video and well, things were getting rather tedious until the fifth track kicked in and the spoken word ignited what was until then a rather dull and directionless slightly less that three dimensional post-rock instrumental drum-driven album that seems happy to deliver the same idea in the same way with the same pace and the same texture again and again (and again).

When 65Daysofstatic first emerged, their so-called “post-rock” was alive with colour, briming with emotion, that was way back then though and 65Days never really built on any of it, are they still alive? I really don’t know, for a while back there they were vital, back there they punched a hole in the wall and a bag load of bands pushed through it, Khompa are one such band, and according to the press release that just shouted from the e.mail inbox, this is a “must hear new album from Monotreme Records, home of 65Daysofstatic….”  Beside that one track with the colour of the rather dramatic spoken word over the tops, this is a difficult listen. The texture remains the same, so does the pace, the patterns are repeated and repeated in a not very positive way (repetition can be positive), same texture, same colour all the way through, same same same until we get to the relief that is the eight minute closing track Wrong Time, Wrong Place, at last a different pace! At last a different atmosphere, at last some time and space!

Opening track Nettle Empire is bright for the first couple of minutes before in dawns that that is about all there is to it, that’s as far as things are going to go and rather than sticking with the album to the bitter end you’d far rather be listening to Battles or Animal Collective or indeed that new Thought Vomit album up there at the top of the page…. Back on to the third track now, The Shape, didn’t notice the second go by (I just put the album on again, sucker for punishment), The Shape is same pace, same sound, same texture, same colour….     Louder is the fourth track, in isolation any one of these tracks might have been interesting for a couple of minute but hey… no, enough now…. More from here if you want to know more, and we guess a lot of you will, here it is….  and…. gawd, that was tedious…