Never quite know what to make of Red Gallery, you find it at the top end of Rivington Street, Shoreditch, East London, excellent location, right there on that corner right by the spot where the much loved Foundry once threw out so much artistic attitude.  The people who run the Red space seem far more interested in their music events, the street art tours and their weekend markets than the actual gallery space itself, never quite sure if the space is actually open and something is actually installed or the door is just open and they’re half way through installing something new? The gallery shows tend to give the impression of being thrown together as almost an after thought, “formal” is not the first word that comes to mind when thinking of the small Red Gallery space front room. The informal nature of it all would be fine if it came with some kind of engaging attitude, with a “punk rock” disregard for the formality of art, but that doesn’t quite seem to be the case either, well most of the time, really not sure what to make of Red Gallery but now and again something well wort your time pops up at Red.  Right now at Red Gallery there’s an excellent exhibition…. 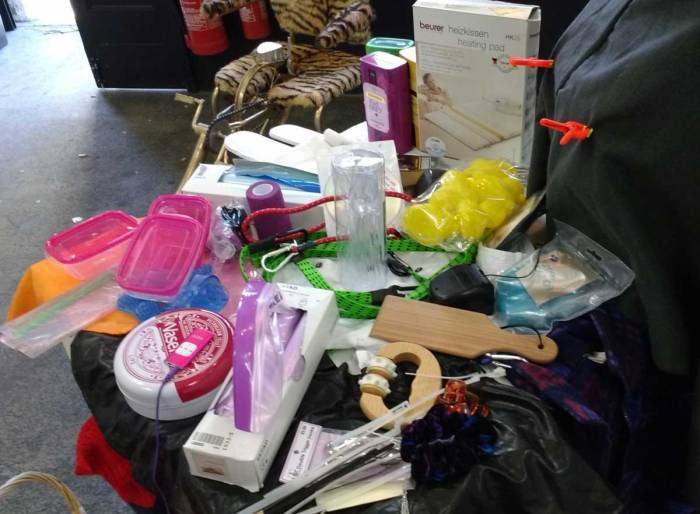 For once the slightly chaotic nature of Red Gallery works, the current exhibition, Objects of Desire, looks like an untidy bedroom, an unmade bad, Objects of Desire is a fascinating show, a curiously good show, dare it be said that this is a vital show? Objects of Desire is a window on to so many lives, minds, interactions, people.  True, the walls themselves are a little bereft, the grubby white walls are crying out for an image or a painting or a face put to a name or something, anything!  The floors the chairs, the shelves with the cute little pig-shaped salt and pepper pots that make her smile, the dressing table tops, the kitchen sink with the glutton-free food the professor in the tweed always brings with him.

There’s lives in here, people, ordinary people with ordinary tales of ordinary lives (as ordinary as any life ever is, does anyone live an ordinary life?).  Lives, people – not just a prop for that day in the life of the guy who ran away and left his tie behind.

There’s Anna in her “bored” necklace, well no not Anna, the real person who calls herself Anna while she’s working, “sex work is work” says the rather gloriously primitive pink and blue banner propped against the gallery wall, it looks like that banner might have served time at a number street-protests and such.

This is brilliant actually, this is an archive, a documentation, it deserves to be in the V&A on permanent display rather than fleetingly occupying this small East London D.I.Y art gallery.

“Eve’s Mound” is in the middle of the floor, a “giant haul of gifts” given to her by one client on a single occasion. Apparently ‘Picnic Man’ arrived for their second meeting with four holdalls full of gifts ranging  from a set of teas to his ex-girlfriends clothes. The collection is described in an audio interview in which Eve discusses the “stuff” and her encounter with “Picnic Man”

Objects of Desire is a show put on by “artists, anthropologists, sex workers and activists” The show runs at Red Gallery (an excellent use of the space) until Sunday 14th August when there’s a closing party and an East London Strippers Collective funeral march marking the demise of Shoreditch. “Our closing day will coincide with the East London Strippers Collective presents The Wake. Members of the ELSC will hold a New Orleans style jazz funeral in the basement of Red Gallery to mourn the closure of the local venue The White Horse”.

HERE’S THE OFFICIAL INFORMATION FOR THE SHOW…..

A collaborative project by sex workers and artists shifting the focus of the ‘object of desire’ through archiving and art. Open every day from 12-6.

Objects of Desire at Red Gallery will bring together collection of objects related to sex work and display them alongside narratives in text, audio and video form.

Focusing on the personal stories of sex workers, Objects of Desire shifts the conversation from one that centres on the purported objectification of people to an examination of the social relations of sex work through the physical objects involved, specifically items gifted to sex workers. Object based narratives allow an exploration of the everyday relations sex workers have with their clients, lovers, families and the objects themselves. 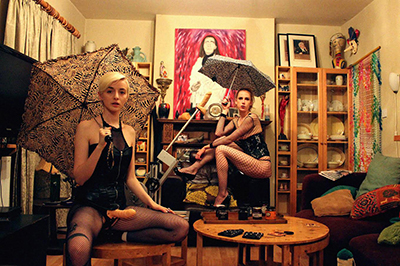 Following an open call for objects from sex workers, Objects of Desire has collected gifts such as jam, The New Testament, an endoscopic camera, shiny leggings and a Blue Balls F**king Machine (BBFM). Their biographies all illuminate the ways in which the relations of sex work are managed, play out and sometimes surprise.

As Rori says about the Assorted M&S, Fortnum & Mason and Tesco jams and preserves she was given by a client:

“I’ve wondered why he always gives me preserves. I can see that he gets a lot of pleasure from giving me food and feeling that he is caring for me […] but I’ve also noticed that he is very into bodily fluids and often says how nice it is that we “taste” each other. I wonder if the jars of sticky jam are a symbolic substance, a kind of proxy for bodily fluids […] if me storing them in my cupboard and ingesting them is a way for him to transcend the boundaries of our sessions, inserting himself somehow into my home and body.”

Through a series of workshops and events, the exhibition will invite discussion around the ways in which both sex and labour are perceived, understood and moralised in the UK today. Objects of Desire is not merely an attempt to “humanize” sex workers through providing outsiders with a glimpse into their lives, rather, OoD challenges the wider public to reflect upon the dynamics of gendered labor, complex hierarchies of power and care and the interplay of emotion and materiality in all relationships.

Rori  – An anthropologist currently undertaking a Masters in social anthropology. Rori has an enduring interest in the stories and narratives of sex workers and has been an active sex worker in London for five years.

Mia  An artist and curator generally interested in people and the politics of their relationships, experiences and histories. Currently researching and making work about fetish and sexual or intimate obsessions and fantasies.

Click on an image to enlarge or run the fractured photos….

One thought on “ORGAN THING: Objects of Desire at Red Gallery, a brilliantly human show…”