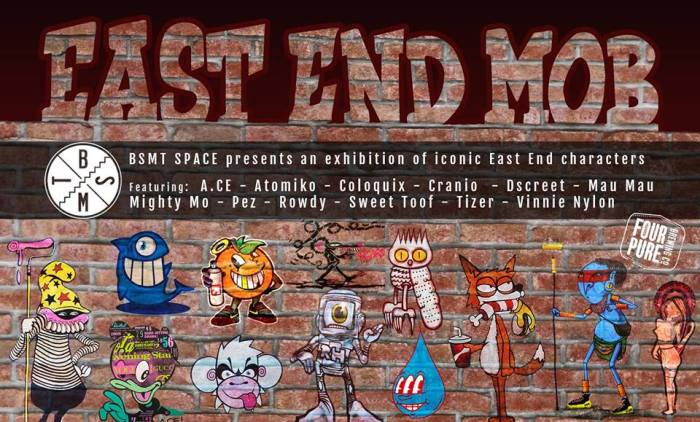 A quick Tuesday afternoon parish notice and a preview of a potentially interesting event over in the Dalston basement that is BSMT Space. The basement space team do  need to be fined for the over use of the “iconic” word in their press release and the only thing more annoying that the overuse of “iconic” is people describing the most ordinary of experiences as “surreal”, there is a need for squads of giant three armed people with metaphorical fish-shaped baseball bats attending to the misuse of both these terms and while they’re at it, dealing with all the “smashing it” that’s currently going on along with “this is the bomb” nonsense. Enough of the surreal feeling of strawberry jam tasting of strawberries and everything beein iconic, one with the parish notice…

The  BSMT Space team say they “are pleased to present EAST END MOB: A one time gathering of 12 iconic East End street artists”. The show opens this Thursday evening, (a clash of course but you’ve got time to have a look and get to the pub before kick off)

BSMT Space is in a basement sown some fancy looking stairs at 5D Stoke Newington Road, Dalston, London, N16 8BH, just up the road from surreally iconic Ridley Road Market where people really do “smash it”, and just along from the not very iconic Dalston Kingland railway station where nothing surreal ever happens

Here then is the lazy cut ‘n paste of the gallery press release, the show opens on Thursday April 20th and runs until May 14th.  Although we do have to question things just a little, East End mob? East London artists? Last time I looked Miami was not on the tube line just up from Bethnal Green and Brazil was not a ten minute bus ride from East Ham, the North Devon coast is not on a night bus route? And Barcelona? At least yer man Sweet Toof is involved.  We really should send yer man Stinky Turner over to the basement for a quick word, East End? Coloquix? Really? Part of the problem a lot of East End artists are having right now is that they’re all being shoved out, their walls and art spaces are being knocked down. This is a good looking show but hey, surely this is more a rather decent gathering of street artists from all over the globe than a show featuring a “gathering of 12 iconic East End street artists”?  Take it away Jefferson…

Enough of us, we’ll shut up about gentrification and artists being pushed out of Hackney and Walthamstow and Fish Island and the Wick and wondering if this really is an East End Mob and okay, we’ll let them get away with saying those Mighty Mo monkey heads and those owls are kind of iconic, and here you go, enough of what we thinks, here’s the iconic press release on the other side of this good looking  owl (we do like an owl, them owls are as East End as those teeth and…) 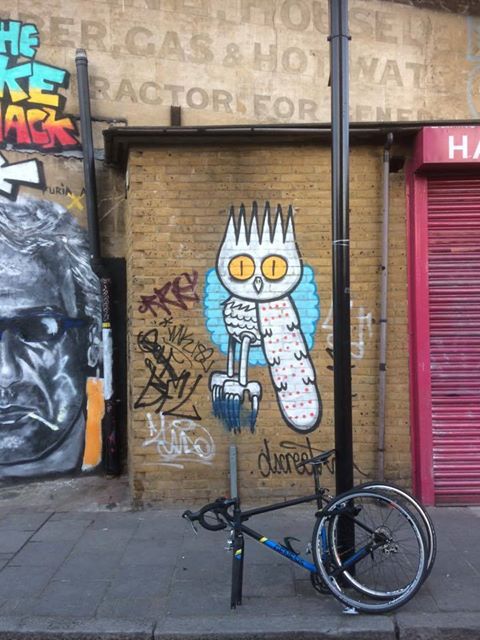 “In the last decade London’s East End has seen some remarkable changes. The wave of gentrification has forced the once industrial sprawl and urban wasteland of the area into adopting a different facade. ‘East End Mob’ presents work from 12 iconic artists who have been actively painting in the area before and during this change, their Character-driven style synonymous with the walls and landscape of the East End. The line-up includes A.CE, Atomiko, Coloquix, Cranio, Dscreet, Mau Mau, Mighty Mo, Pez, Rowdy, Sweet Toof, Tizer and Vinnie Nylon- ‘East End Mob’ is an authentic exhibition and much needed nod to some of the biggest pillars in East London’s Street Art and Graffiti scene.

A little more from BSMT Space about the artists being showcased…

A.CE is a London-based artist drawing inspiration in part from Dada collage and classic Pop Art. A key figure in the UK street art scene for over 10 years, his work is a raw presentation of nostalgic imagery.

Atomiko is a 100 percent Miami artist, growing up in the emerging Miami graffiti scene of the 80’s. His iconic orange character -as much a symbol of Miami as are the palm trees or neon lights has been placed all over the world.

Coloquix has been appearing on walls, in woods and in rivers in the north of England and beyond since 2013, where she is is often more important than how she looks. Her travels have extended to Europe and the US.

Painting since 1998, Cranio‘s trademark blue Indian was the result of his search for a character that could represent the indigenous people of Brazil. It could not have been chosen better! With their typical blue colour and distinctive shape, the Indians find themselves in funny and curious situations, provoking the observer to think about contemporary issues around consumerism, corrupt politicians and the environment.

Dscreet is an Australian Artist from a graffiti background. He now works in a variety of media including painting, film, sculpture and installation. He’s most well known for the “electrified owl” image which has appeared in galleries, books, films and streets all over the world.

With roots planted in the surf and country vibes of the North Devon coast, Mau Mau brings an air of rural sophistication to the art he has been knocking out for over a decade. He has chalked up a reputation through the environmental and politically astute threads that have consistently run through his artwork. His pieces are bitterly topical with a tongue-in-cheek sweetener.

Pez started painting in 1999 on the outskirts of Barcelona. At first he used to write his signature, and soon it evolved into a fish. Searching for a universal language to communicate with, he decided to paint a fish character with a great smile near his tag and El Pez was born! Since then it has been a way to pass on good vibrations to the walkers on the streets.

Established in 1987, Rowdy became an integral part of the Bristol Graffiti scene. Rowdy’s trademark crocodiles can be found world-wide in huge scale and are indicative of the playful nature of the imagery in his work: long may we continue to see oversized mice and crocs attacking our walls.

One of the most prolific and artful of London’s Street Artists, Graffoholic Sweet Toof‘s tags, throw-up’s and more elaborate street pieces become a whole language that inform his studio work. His work is almost synonymous with the East End landscape, there are not many places that haven’t been decked out with the gums and teeth!

Tizer started painting in 1988. This founding member of the ID crew is a venerable Graffiti King with his own distinctive style and an inimitable suite of characters. A prolific artist, there is no part of London Tizer hasn’t painted.

Vinnie Nylon‘s work employs a host of pop characters in his mid-century inspired works which range from block print, screen printing and collage to large-scale painted canvas and wood panels as well as full scale walls. His interests and influence span from the 60’s pop movement to New York’s east village scene of the early 80’s.

For more information or to RSVP for the opening night contact: info@bsmt.co.uk

One thought on “ORGAN PREVIEW: East End Mob? More a good looking gathering of artists from around the globe at Dalston’s BSMT Space this coming Thursday evening…”