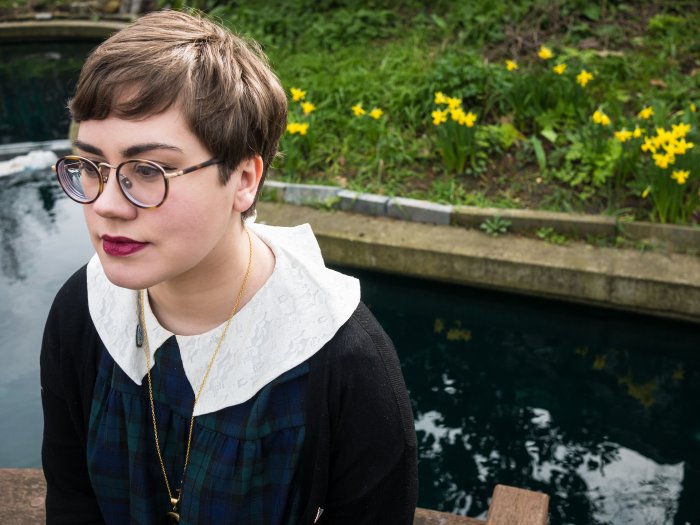 She’s flowing along quite nicely, you’re thinking this is pleasant enough, yes, rather like this and then Solar Phenomena quietly eases in in a very simple way (I’m sure it isn’t simple, making simple art is never as simple as it looks or sounds). This isn’t simple, it just sounds so simple, flowing gently, beautiful, delicately strong, track four and she’s won hearts and minds with her glowing voice and her simple songs, with her clever textures and her glowing layers.  Deerful is Emma Winston, I know very little about her, I don’t really want to know too much right now, just want to enjoy this, don’t want to know too much about her apparitions or her watching of each other falling apart for now.  Heard a track the other day, needed to hear more, more of her  delicate fire signals and such, her new album Peach is out this week – Peach was written, played, recorded, produced and mixed by Emma Winston, she did the sleeve art too – mostly beautiful songs, do love those bleepy electronic sounds adding those details and catching you out, did the computer just crash, no, it was Deerful staring another song . Peach is a refreshing album,, beautiful songs, dare we say lo-fi? No, far too crafted and carefully considered to be mere lo-fi – crisp sounds, minimal, uncluttered, beautifully voiced, almost twee, twee in a very good way though, no, not twee – delicate, fragile, strong, a forest growing.

These do sound like very personal songs, almost like it might be rude to listen too closely to the tales of the empty sky above her. Mostly Peach is a delightful album, a beguiling set of songs, beautifully simple, beautifully detailed, words that get locked inside your mind, a spark in your heart, subject of her love and the delicate pings and crisp tings and chimes and the sound of buttons being pushed.  So gorgeously textured, simple minimal songs so beautiful detailed, little musical notes that catch the light is such a perfect way.

Really don’t know much about Emma Winston or Deerful as she is known here, heard a song the other day, needed to hear more, got hold of the album, love the album to bits and no, it doesn’t take to the fourth track, those wider skies so far away from land will win you straight away, and then that opening of Conceptual Art and stay up late and play it lots, every breathing partial…   Glorious.  (sw)

Peach is released 2nd June 2017 via wiaiwya on CD/LP/DL. You can buy it via Bandcamp

“Peach’s narratives are driven by the feminine, combining Emma’s reminiscences and stories with those of the (extra) ordinary women who inspire her”.

Emma describes Peach as being “an album about affirming the ordinary and vital, about the everyday things that provide comfort to you in difficult times, and about finding your own way to push back against the expectations that constrain you. It’s about moments of contact between people, especially between women, and above all about celebrating the small moments that make up a life.”

The video was directed and produced by Candy Parfitt. Filmed at the Imperial War Museum’s Peace Gardens, on a Digital Harinezumi Reborn.