Another five art things then, a just about weekly gathering together of five art events or shows or exhibitions or openings or things of an artistic bent that you should maybe try to catch before they close (if you haven’t already). We’re London-based, we make no apologies for the London nature of things around here. Organ, in all the many forms it has taken has always been about exploring things, sharing things, passing on news of things, news of art, of music, of creativity, underculture, the notion of contacting to switch the other.  If you think there’s something we should be coverting then please do make contact, there’s no fadishness here, art excites, exploring excites, painting excites, can’t wait for that Norman Ackroyd opening at Emmes tonight.  We’re not making any annoying claims that these are the best five things to go see, we’re not headlining it as “the Five Most Exciting…” or claiming we hae it all covered or any of those silly things, these are just five things we’re looking forwatd to or curious about or…. Art excites.

1: Earth Wind & Fire is a celebration of contemporary Australian Indigenous art alongside Western European Contemporary art, presenting six Australian Indigenous artists alongside seven British artists.  The exhibition reflects on the similarities of conceptual theme and craftsmanship, with treatments and motifs such as home-made pigments, symbolism, abstraction, depictions of nature, and the celebration of culture; both ancient and modern. 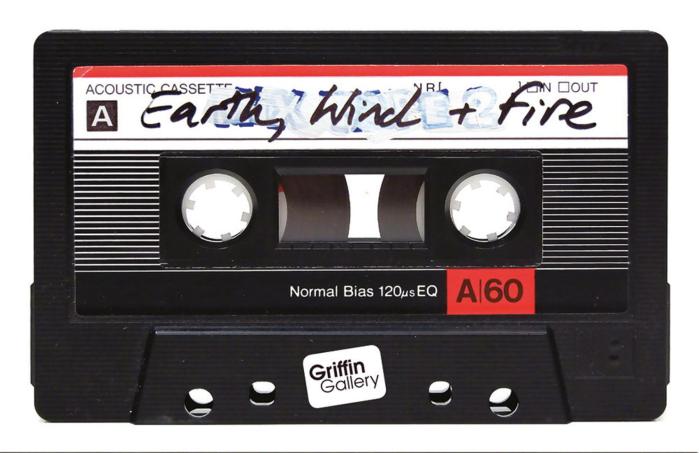 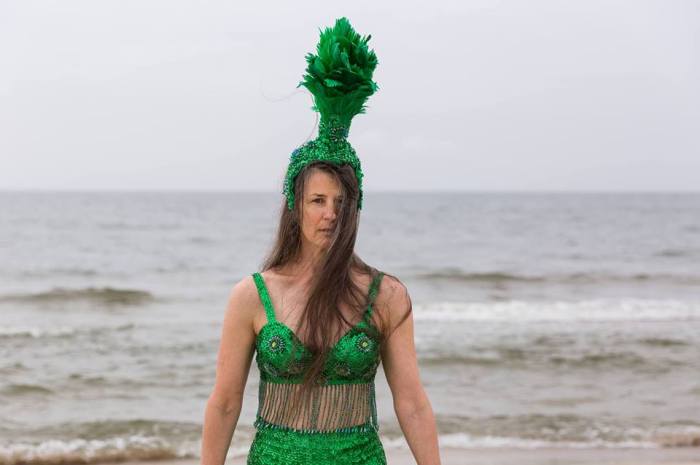 2: W.A.K.E FESTIVAL – One week on from those holiday homes (up there) all the good things that happened at the Folkestone Triennial and the adventures at the Art Car Boot Fair comes the rather enticing W A K E Festival, “a three-day festival of contemporary time-based/performance art”. Once again it happens down by the seaside in Folkestone, this time from September 8th until September 10th

The festival consists of site specific, durational works which unfold in and around Folkestone, across the 8th, 9th & 10th of September. In addition to the site based works, each evening (7pm-10pm) a more condense series of performances take place at ]performance s p a c e [. You find the venue at 62 Tontine Street, Folkestone, Kent, CT20 1JP. Here’s the Facebook event page

“On the 10th of September ]performance s p a c e [ will host a public brunch. Departing from Folkestone Triennial’s theme of Double Edge – ]performance s p a c e [, the Live Art Development Agency, Folkestone Fringe & their invited guests will imagine and discuss creative practice on or at the edge – by reflecting on the live programmes of both ]ps[/WAKE Festival and Folkestone Fringe/Push and Pull. Contributors and audience will be asked to re-imagine the limits of identity, question on which side of borders they find themselves and explore the roguishness of creative practices that expand beyond the boundaries of discipline, ideology and institution. Photo credit: Kira O’Reilly (photo: Taija Jyrkäs and Mika Friman) more info: /wakefestival

3: Harland Miller‘s One Bar Electric Memoir at the White Cube’s Mason’s Yard space is almost over,..

“Reverse Psychology isn’t Working” is just one of the titles of these oversized book covers of Harland Miller  … A little bit more than just “fun works that lighten up the White Cube”, the show comes to an end on September 9th.

4: Sign Of The Times is a a solo exhibition fromTommy Gurr, a collection of his contemporary and vintage road signs…. 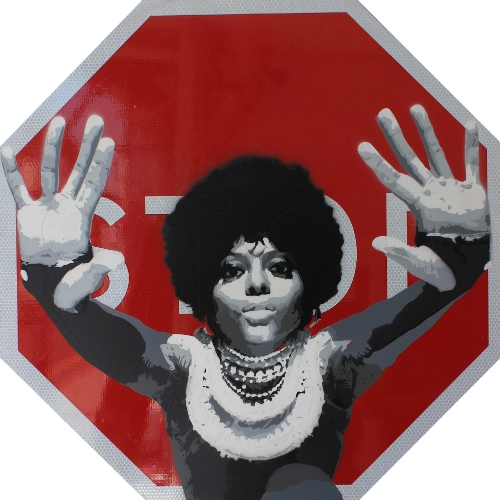 “enhanced by the satirical and sometimes politically charged graphic stenciled illustrations applied to each original sign to make each one a standalone statement piece of urban street art” Sign of The Times happens at underdog Gallery from the 7th to the 17th September. Opening/private view 6 -11 pm Thursday 7th September, more details via the gallery website. Tommy Gurr is an artist from Whitstable, Kent. he combines his art with his second great love. From Africa to Australia to Camden via Hackney, his stencil murals can be found all over the globe, including the streets of Siem Reap, Cambodia, where he featured as an artist in residence for two years. Underdog gallery is at Arch 6, Crucifix Lane, London Bridge, London SE1 3JW 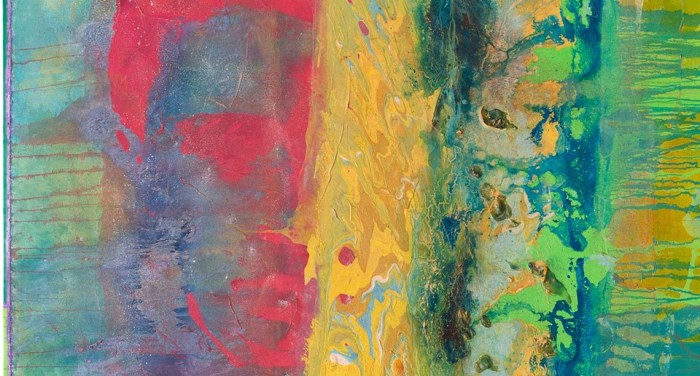 5: FRANK BOWLING:  The prospect of a Frank Bowling show rather excites, A Hales Gallery spokesperson says the gallery is “delighted to announce “Frank Bowling: Fishes, Wishes in Summertime Blue”, a solo exhibition of Frank Bowling’s works created in the past 3 years.  Now widely recognised as ‘first among equals’ in the field of post-1960 abstraction, Bowling has for the past half century devoted himself to a tireless investigation into the nature and possibilities of painting, constantly exploring new principles and processes. It is this dynamic spirit which this exhibition celebrates, providing audiences an opportunity to explore the rich vocabulary of techniques and ideas which Bowling has developed over the years and which is so fluently expressed in his contemporary practice”.  For more information please visit halesgallery.com 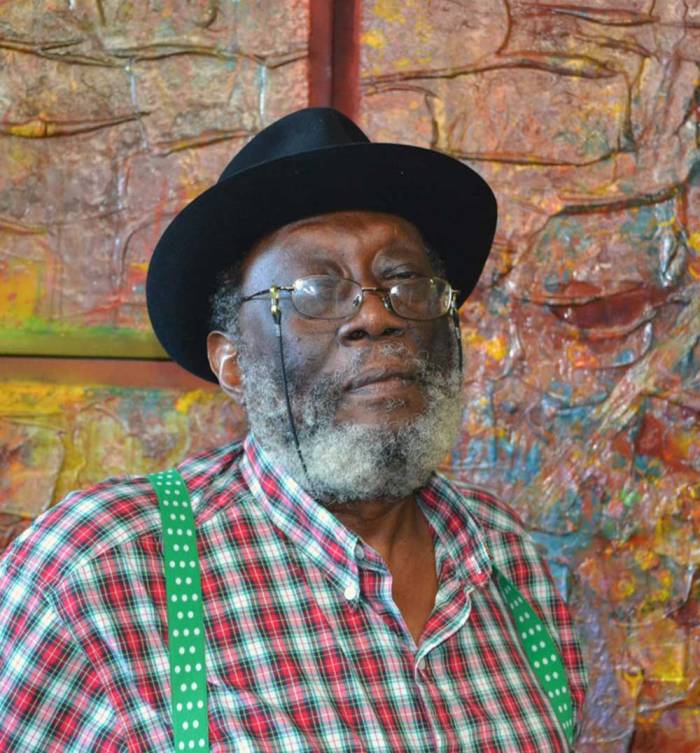 FRANK BOWLING, O.B.E., RA, the Guyana born British trained artist, was on May 26, 2005 elected a member of England’s Royal Academy of Art, Burlington House, Piccadilly, London. Mr. Bowling was among about a dozen artists proposed to fill one of two vacancies in the eighty-member academy, and is the first Black British artist elected a Royal Academician in the over two hundred year existence of that institution.

An abstract painter, he graduated from the Royal College of Art in 1962, and has since the mid 60s spent part of each year between London and New York where he’s maintained studios.  Mr. Bowling’s paintings have been and continue to be exhibited in Europe, the United Kingdom and the United States and are included in important private and corporate collections worldwide, in addition to the permanent collections of the Metropolitan Museum and Museum of Modern Art in New York, as well as the Tate Gallery in London.

And okay one more before we leave so soon…

6: QUIET BRITISH ACCENT‘S summer residency  that opened back in June up at Hackney’s Elements Gallery comes to an end this Friday with a closing event call…

“Following on from exploring the heyday of the British seaside and it’s connection to burgeoning youth subculture in the Sixties, art duo Quiet British Accent take the seaside’s subsequent decline from the late Seventies until recent times as the inspiration for the closing event of their three month ‘Wish You Weren’t Here?’ residency at Elements Gallery London.

QbA will update their installation, closing down parts and refitting the interior of their WYWH beach hut, using signwriting techniques on driftwood and reclaimed wood to imagine a playful dialogue between resort and holidaymaker, whilst hinting at a restyled, regenerated future for the British seaside.

By the mid Seventies 40 million people took to the British coast, but holiday habits changed with the introduction of bigger jet planes that carried more passengers on shorter flights to guaranteed sunshine. With the demise of the British seaside holiday, coastal towns suffered badly. Entertainment venues shut, businesses and local industries closed down, boarding houses swapped holidaymakers for the unemployed. The once packed railway lines taking folk to seaside destinations suffered too, some like the Atlantic Coast Express (Waterloo to the West Country) closed completely.

Hardest hit were the seaside towns who relied on the working classes visiting from cities, their prosperity dependent on this tourism. With high unemployment, poor education, welfare dependency and high rates of teenage pregnancy, Jaywick Sands, the tiny seaside town along from Clacton-on-sea is known as Britain’s most deprived area.

Both Jason and Sharon from QbA have personal experiences of the seaside. Jason grew up in Westward Ho!, a coastal resort town in Devon, and saw at first hand the decline before leaving for London as soon as he was 18. Sharon has family in Folkestone and has witnessed the gradual decline in the area with the reduction, and eventual stopping, of cross-Channel ferries.

‘Leaving So Soon?’ is a free ONE DAY ONLY event before QbA close down their seaside for the season”. You find the closing event at Elements Gallery, on Friday 7th Spetember, the gallery itself is in the back yard of the rather difficult Lubomirov/Angus-Hughes gallery. you find it at 26 Lower Clapton Road (entrance on Urswick Rd), London, E5 0PD

More of this kind of thing at the start of next week, meanwhile the daily coverage of art, music and underculture goes on everyday here at Organ, if you think there’s something we should be covering then come say hello, drop us an e.mail, share your news with us….

Five Art things, five slices of art that have passed our way via our e.mail in-boxes or our social medial feeds in the last week, five things you might like to go explore, shows that are happening right now or exhibitions that are about to happen, or maybe just a piece of art we feel…