Robert Mongomery’s Parasolstice – Winter Light 2017 opens tonight at London’s Parasol Unit, if words on walls do it for you in terms of art then, you probably love the artist, he certainly has something to say, and he does say it with a certain style. Seems far too easy to me to just put a word on a canvas or wall and call it art, Montgomery does do it rather well though, if you must do it then do it well…

Parasol unit foundation for contemporary art is delighted to present Robert Montgomery’s POEM IN LIGHTS TO BE SCATTERED IN THE SQUARE MILE, 2017, the latest addition to the Parasolstice – Winter Light series and the first light poem to be commissioned by a public London institution.

“Known for his rhythmic texts pasted across posters on billboards and hoardings around East London, and for his dramatic light pieces and fire poems displayed throughout the world, Scottish artist Robert Montgomery brings a poetic voice to the discourse on Text Art. His eloquent and, at times, biting statements cry out about what goes on in the world. Often giving voice to a common global conscience, spurning consumerism, raging against war and injustice, he also reminds us to appreciate the natural wonders of the world. Writ large, his texts displayed on walls in public streets speak powerfully to passers by. His works have something in common with the 1960s Situationists, a revolutionary group of European avant-garde artists, writers and poets who created large installations in unexpected places.

The starting point for Montgomery’s site-specific work on the terrace at Parasol unit, is a consideration of place. Responding to its location and surrounding neighbourhood in contemporary time, Montgomery’s light poem, constructed in wood, metal and LED lights, illuminates aspects unique to this area of Shoreditch and its history, such as the now demolished Eagle Music Hall and ‘Grecian Salon’ that stood on the corner of City Road and Shepherdess Walk very near Parasol unit. As an artist who has lived and worked close to the gallery, Montgomery is conscious of the psychogeography of this area and its ongoing fusion of past and present: the City of London to the south, the ‘silicon roundabout’ at Old Street, alongside historical sites such as Wesley’s Chapel and the grave of William Blake. One strong thread throughout Montgomery’s work is how he thinks of a city as part of nature, as a ‘beehive’ of humans. This raises the question of what can be learned socially and ecologically by thinking of cities as natural phenomena.

Serene and intimate moments quietly illuminate Montgomery’s texts. The weather in the city often informs his works: those moments when we notice a breath of air or the movement of clouds, when despite the built-up environment we feel a sense of being in nature. In the heart of a fast developing neighbourhood undergoing constant ambitious construction, Parasol unit nestles among the growing ‘Manhattanization’ of this area of East London. Yet, out on the terrace, at the foot of Montgomery’s light poem is the water of the canal basin and above it, between the towering apartment blocks, are pockets of sky and the branches of trees, always reminding us to be present here, and that ‘the city is a magic sculpture we live inside’.” 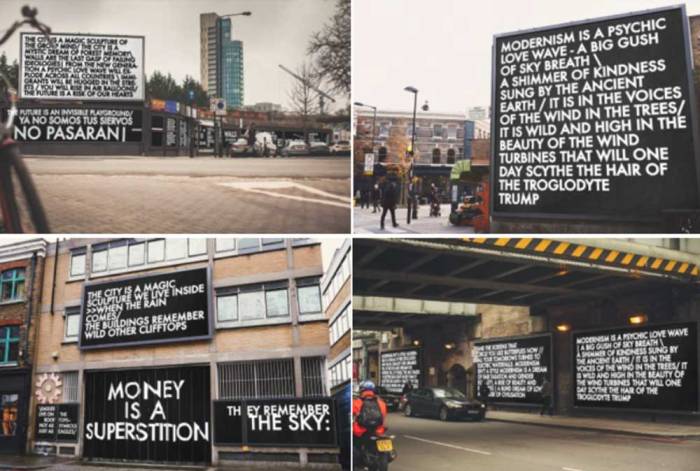 Last week, To coincide with Frieze apparently, Robert Montgomery took over several billboard sites across East London for a weekend Robert Montgomery’s work first appeared around 2004 with his billboard takeovers in Shoreditch. Since then the artist has gone on to international recognition representing Britain at the Kochi Biennale (2012) and the Yinchuan Biennale (2016) and generally seemingly everywhere. In the lead up to his upcoming commission for Parasol Unit, Montgomery was invited back by Jack, invited back to East London to take over five streets and multiple billboards with a series of giant graphic poems.

“I started doing billboard works in Shoreditch in 2004 as my own protest against the Iraq War,” Montgomery says, “and doing billboards in Shoreditch formed the backbone of my work throughout the 2000s. I no longer live in the neighbourhood, it’s too expensive for artists now, but being invited back by Jack is thrilling as I’m getting to take over whole streets where I used to live. It’s letting me work across multiple billboards and look at each street as a giant graphic poem and experiment much more with the visual aspects of the work. I’m thinking of them as concrete poems really with the billboard as the page and pushing the graphic elements more than I’ve been able to before.” – Robert Montgomery

Montgomery’s takeover five major locations, responded to the spaces by “creating a series of boldly provocative works, using his signature style – striking white type on a black background. The texts were lyrical, dreamy and almost optimistic, covering themes which include Modernism, racial and gender equality, immigration, love and hope, as well as strong statements against Donald Trump’s denial of climate change”. The series of works were featured on Jack’s sites at Commercial Street, Curtain Road, Old Street, Broadway Market and Ebor Street.

Apparently Jack is a creative out-of-home agency specialising in bold, unconventional advertising campaigns for the art, culture, fashion,music and lifestyle sectors. The collaboration is part of the agency’s side project, ‘Your Space Or Mine’, which is an ongoing art initiative that exists to fuel individuality, imagination and open dialogue to provide a powerful platform for artists on the street. “There’s no place quite like the street, it’s the perfect canvas for public expression, which is why we have always been committed to supporting both emerging and established artists, giving them a platform to create works of art outside of the confines of gallery walls. We’re very excited to be collaborating with Robert Montgomery on our latest Your Space Or Mine project, which sees him taking over five of our most popular sites in East London for the very first time.” – Khaly Nguyen, Jack 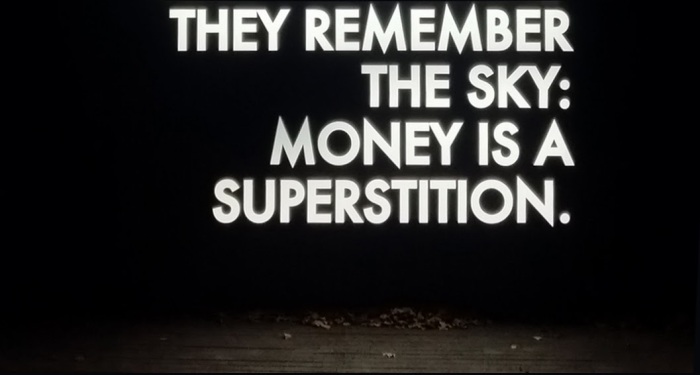