Five more art things, five more recommendations, mostly London things for that is where we (currently) are. Does this five things work for you? Or are you still busy sniggering about those damn rail tracks? How embarrassing was that? Disneyland? Dismaland?  Are you still buzzing on those Piotr Uklański paintings, the layers of that big Corinne Wasmuht piece or that big yellow flower of Thomas Scheibitz. Notice of five more art events that have come to our attention, the five things that pricked curiosity a little more than all the others…

1: DAVID SHILLINGLAW at The Palm Tree Gallery – “CultureLabel presents a solo exhibition of work by acclaimed artist David Shillinglaw, in aid of Mind in conjunction with CultureLabel . The Mechanics of Happiness will feature his bright and emotive drawings, paintings, collages, prints and books. David will also be releasing his new book, tied to the exhibition and will be doing an exclusive signing event on the 28th. The exhibition opens on the evening of October 24th (6pm until 8pm) over at the Portobello Road spave in W10, the show runs until October 29th. The book signing is on 28th October. The Palm Tree Gallery, 291 Portobello Road, London, W10 5TD

CultureLabel have partnered with Mind, the mental health charity, to produce a brand new line of limited edition prints and T-shirts featuring bespoke designs from London artist David Shillinglaw. There are 7 exclusive limited edition prints and T-Shirts, commissioned specially in conjunction with Mind ahead of Shillinglaw’s solo exhibtion in October. A percentage of all sales from these limited edition prints goes towards Mind. A new design is being launched every month over the course of this year. Piece of Mind is a line with a difference – aimed at removing stigma and opening up conversations. Working in association with Mind, these unique designs will raise money and awareness for the one in four people who live with a mental health problem. 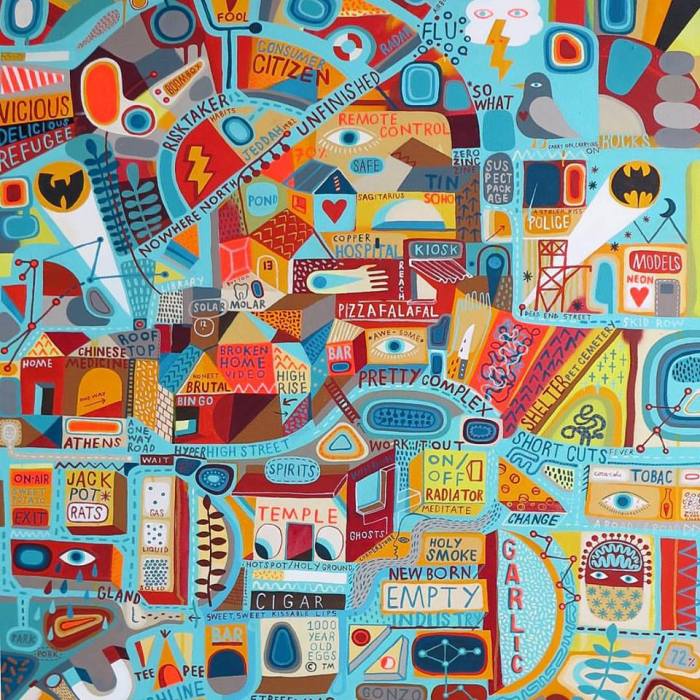 2: ANITA FORD and ALFRED HUCKETT – Hidden Meanings at Menier Gallery – “artists Anita Ford and Alfred Huckett present their joint show ‘Hidden Messages’, which opens at Menier Gallery, London on October 24th. Ford’s mixed media works, which reflect on her highly personal struggles living with cancer and hearing loss include drawings, photographs, sculpture and prints, while Huckett will be showing work from his ‘Vestments’ series which explores his transvestism through paintings and collages from the mid-90s, and recent large-scale mixed media works. Both artists explore ideas of personal identity in their work, and the exhibition offers a chance to see previously unseen pieces”. The preview is on 24th October (6pm – 8pm) and the show runs until 3rd November.  Menier Gallery is at 51 Southwark Street, London SE1 1RU

4: JOSEPH GODDARD  is a Leeds-based artist “concerned with postwar architecture, sculpture, painting, photography, Brutalism”, catch his work at Arts Depot – A solo show of Joseph Goddard’s architectural sculpture series Structure of Collapse – “Joseph Goddard is an artist predominately concerned with post-war architecture and its inherent ideology. His latest sculptural series Structure of Collapse draws upon the ideas of French philosopher Paul Virilio, imagining the urban space as a transmitter and receiver of information, rained down from orbiting satellites and inhabited by global citizens who absorb its ideology. The series is shown for the first time in it’s entirety at Arts Depot, London 22nd – 28th October”. Arts Depot is at Tally Ho Corner, 5 Nether Street, London, N12 0GA4

5: STICK ‘EM UP – a street art flavoured group show at Well Hung Gallery who say they are “delighted to announce a group ‘paste up’ exhibition with artists; A.CE, Ben Rider, Donk, Hin, Luap, My Dog Sighs, Pablo Delgado and Shuby. These highly skilled artists are creating a huge buzz in street art by pasting up their provocative imagery around London. Paste-ups are fast becoming the ‘go to’ medium as a way to communicate in the increasingly transient world of street art. Our artists have a unique approach to popular culture and mass media imagery, which are visually very exciting. Work included in the show features technicolor artworks emblazoned with trademark imagery (of animals, eyes, teddies, bunnies, little people) and bold iconography. Their work is very current and intoxicating, appropriating the language of advertising and pop culture to create thought provoking, psychedelic visuals and messaging. Join us on Thursday 26th October for the private view from 6pm until 9.30pm. The exhibition runs until 25th November”.- Well Hung is at 239 Hoxton Street, London, N1 5LG 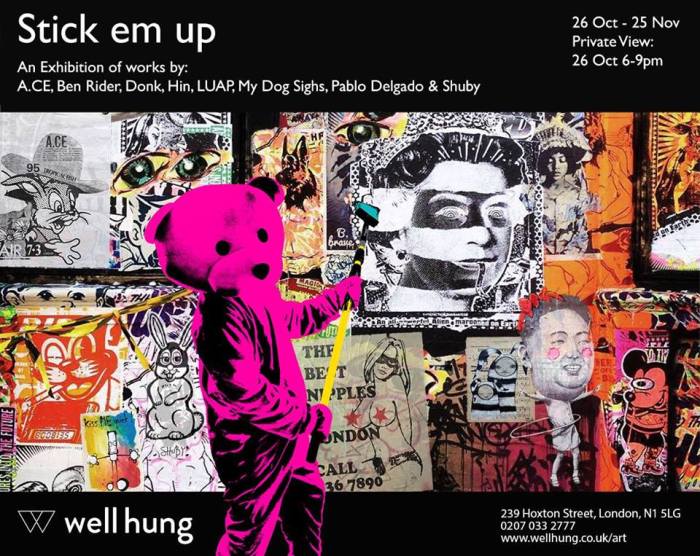 And that will do for now, until the next five come along or….