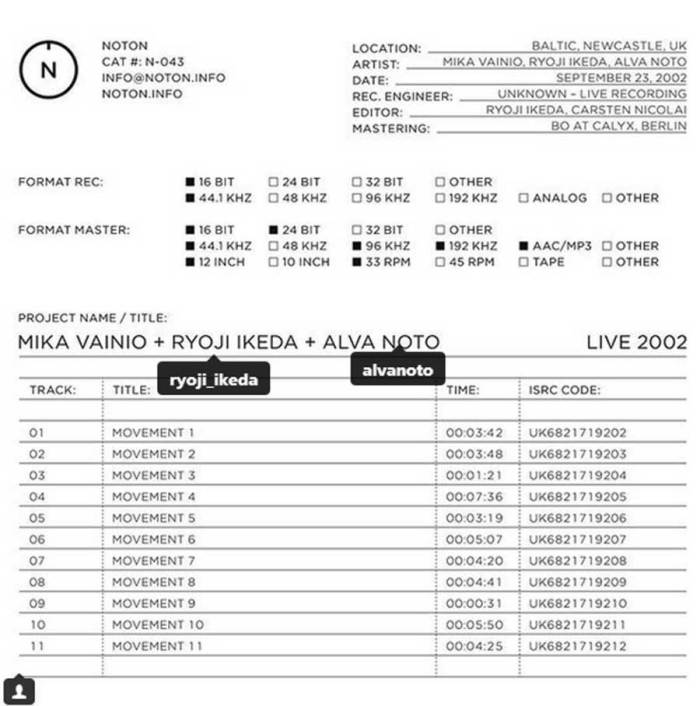 Organ Thing of the Day: Back in September 2002 Mika Vainio, Ryoji Ikeda and Alva Noto (Carsten Nicolai) were invited by the Baltic Centre For Contemporary Art to be artists in a residence. As a result of this residency and research period, three live performances emerged and these three tracks are now to be released. All the tracks on the new record were recorded live on September 23, 2002 at the Baltic Centre For Contemporary Art in Newcastle, UK. All sounds were made by Mika Vainio, Ryoji Ikeda and Carsten Nicolai. The recording are set to be released by Noton as Live 2002’ on the19th January 2018

NOTES FROM THE LABEL….

“Live 2002’ captures an inspired performance at Balltic Centre for Contemporary Art in Newcastle by three revered, influential and like-minded pioneers; Ryoji Ikeda, Alva Noto, and the late, great Mika Vainio. This recording marks the only ever concert by the trio and its release serves as a tribute to the much-loved Vainio. “Mika was not only a friend and collaborator, but also an inspiration for my work as an artist. This is a celebration of his contribution to our work”, says Carsten Nicolai, AKA Alva Noto.

Minimal but highly effective, the performance builds throughout with deep sub bass, sleek, spacious sound design and high voltage, inorganic ambience. The inherent noise floor in studio equipment is pushed-up to take center stage. This is sound of electricity, the hum of the engine room and of technology operating almost independently, only gently coerced with artistic finesse by expert human hands.

At points static is used decoratively with an ornate, delicate intricacy. At points it becomes rhythmic, like the innate repetition found in machinery. The sonic spectrum later opens up, evoking a rush with laser-like beams of audio light and a barrage of colossal, synthesized waves.

Born in Karl-Marx Stadt, Saxony in former East Germany and currently based in Berlin, Carsten Nicolai studied architecture and landscape design before pursuing art and music, when his interest in David Toop’s ideas on the structural and spatial qualities of sound inspired his own endeavors.

In 2000, Nicolai adopted the pseudonym Alva Noto for his growing experiments in sound and music, to distinguish them from his visual art, for which he uses his own name. Nicolai and peers like Ikeda are part of an artistic movement whose work explores the intersection between art, science, sound and music, with a strong adherence to reductionism and a development of their own theories and sonic, acoustic and visual symbols/codes. His musical oeuvre echoes in his work as a visual artist; Nicolai seeks to overcome the separation of the peoples’ sensory perceptions by making scientific phenomena like sound and light frequencies perceivable to both eyes and ears.

Influenced by scientific reference systems, Nicolai often engages with mathematical patterns such as grids and codes, as well as error, random and self-organizing structures. His installations have a minimalistic aesthetic whose elegance and consistency are highly intriguing – and using the principles of Cymatics – he often visualizes sound. Nicolai has participated in important international exhibitions like documenta x and the 49th and 50th Venice Biennales, and performed or created installations in many of the world’s most prestigious spaces, including the Guggenheim, Tate Modern, San Francisco Museum of Modern Art, Sónar and Club Transmediale.

Nicolai started the independent label NOTON between 1994 and 1996. A collaboration with RasterMusic began the same year, and by 1999 the two labels had merged into Raster-Noton, which operated until May 2017. Now Nicolai runs NOTON separately, although all parties will continue with special collaborative projects and activities under the name Raster-Noton.

Ryoji Ikeda is one of Japan’s leading electronic composers and audiovisual artists. He was born in Gifu, Japan and lives/works in Paris, France and Kyoto, Japan. Ikeda elaborately orchestrates sound, visuals, light, and physical phenomena into immersive live performances and installations, utilizing mathematical precision and aesthetics. He focuses on the essential characteristics of sound itself and his razor sharp music primarily examines sound in a variety of ‘raw’ states, such as sine tones and noise, often using frequencies at the edges of the range of human hearing.

Mika Vainio was a Finnish musician renowned for experimental electronic music made under his own name, his solo project Ø, plus various other aliases and collaborations. Much of his output was released on Sähkö Recordings – the label ran by Tommi Grönlund.

Most famously he was part of Pan Sonic with Ilpo Väisänen and initially Sami Salo. The group were known for recording everything live using home-made, modified synthesizers and effect units, samplers and an MPC2000 sequencer, straight to DAT. In addition to performances and sound installations in various high profile galleries and in museums worldwide, Pan Sonic played a gig in London’s East End from an armoured car using a 5000 watt sound system – similar to those used by the police to disorient rioters. Other Vainio collaborations included VVV with Suicide’s Alan Vega and Ilpo Väisänen, work with Chicks on Speed and Cristian Vogel, Fennesz, Keiji Haino, Merzbow, Barry Adamson and Sunn O))), plus Tekonivel and Corporate 09 with Pertti Grönholm.

Mika Vainio died on April 13, 2017 at the age of 53. Tributes to his envelope-pushing genius came from far and wide, including Holly Herndon, Animal Collective, NHK yx Koyxen and Nicholas Jaar. A posthumous MV album called ‘Reat’ and a reissue of the Ø album ‘Konstellaatio’ have been released this year. Noton will also be making two other collaborations between Vainio and Nicolai digitally available in early 2018; ‘MIKRO MAKRO’ by Ø + NOTO and ‘wohltemperiert’ by Ø + noto.