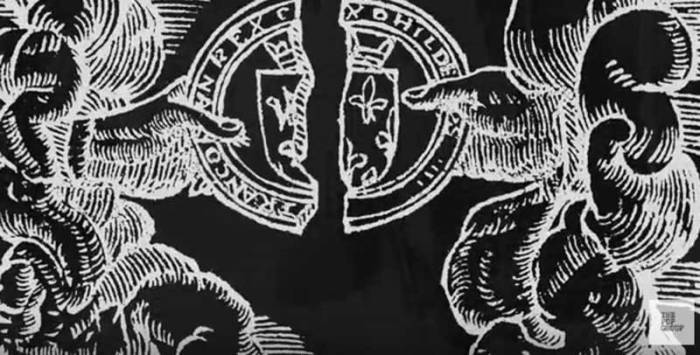 Organ Thing Of The Day? An excellent version of Savage Sea from The Pop Group, a taste of something new from Psychic Graveyard and one hundred what?

“The Next World” is the first single from Psychic Graveyard’s Five-song follow up EP of the same name to their debut album “Loud As Laughter”. Founded by noise rock pioneers Eric Paul (Arab On Radar, The Chinese Stars, Doomsday Student), Paul Vieira (The Chinese Stars, Doomsday Student) and Nathan Joyner (Some Girls, All Leather, Hot Nerds); “Psychic Graveyard have slipped past the boundaries of genre, interpenetrated the digital and physical realms and pieced together the soundtrack to the new aesthetic”. The video was directed and animated by Eric Livingston. Find out more about Psychic Graveyard via what is probably the finest record label in the world, Skin Graft Records.

PSYCHIC GRAVEYARD “The Next World” EP will be released on August 16th, 2019 and is available to pre-order at the SKiN GRAFT Bandcamp Store

One hundred what? What else do we have here? Really not had much time to dive in and see what’s lurking in the always packed Organ inbox, hundreds of press releases and “you’re gonna love this” and “this one is really something you’ll want to cover” and blah blah blah, I do wonder if the people who tall us these things have ever actually read a single Organ page? No, we’re bot going to love that generic piece of hear it all before whatever. Right now we have the new single from some politely average indie guitar band streaming, a band who seem to have put more effort in to growing their beards than they have into their actual music, the press release tell us the Bristol band’s new song has “utilized a killer krautrock riff that effortlessly intertwines with ethereal dream-pop breakdowns”, nah, they made a rather blandly unremarkable piece of indie guitar music that we’ll have forgotten by the time we get to the end of this fractured sentence, they wouldn’t know a Kraut Rock riff from a piece of Snow Patrol fluff thrown at them by one of Robert Calvert’s Urban Guerillas with a neu bag of cans which in turn is why we don’t really bother with press releases that much there days. What else do we have in here? There;s a press release about another yet Stik auction, I love the guy and his very human art to bits but all we ever seem to read is press releases and mailouts about the money and the prices at auctions these days, really couldn’t give a flying flip about the price tag, go put the eyes back on that poor white face on the wall at the back of St Mungo’s, rather upsetting to walk past it every day, a Stik with no eyes, been like that since 2012 and all the pre-Olympic paranoia that gripped East London street artists.

And here we go go again, hang on to your Paypal Apps, Mr Beers is here again, here comes a press release for the latest “Hundred Sculptors Who Were Stupid Enough To Pay To Be In This Book” book, a book put out by one of those galleries who generally view artists as little more than cash cows to be milked as often as possible, I mean, if the people compiling these books did it with some sort of credibility and it wasn’t all about how many fees they can get in we’d have a little more respect for them but really? Is he going to get away with it again?

The press release that strangely doesn’t mention fees paid or artists treated as mere cash cows tells us that The “100 SCULPTORS OF TOMORROW is the culmination of a year-long search to identify the 100 most exciting up-and-coming sculptors working today around the world” reads the press release, what it actually is is the result of a year of social media adverts asking artists to submit images via e.mail and to pay a fee for the honour of doing so. Rather like the previous book “authored by Kurt Beers, whose groundbreaking 100 PAINTERS OF TOMORROW went on to launch many artists careers and is still a leading resource on some of the most important emerging painters in the world, 100 SCULPTORS OF TOMORROW serves not only as an inventory of the most notable sculptors working across the world today, it questions what the very nature of sculpture can be”. the book is about money. Most credible artists refuse to pay cash to submit an e.mail to these kind of things of course, those artists who do are in generally not taken that seriously – shame on the author, shame on the so-called judges involved and shame on the publishers – the bit about launching the careers of artists really is a joke, frankly, the word we’re looking for is bullshit. The author runs a gallery and a regular series of “open call” shows that run in the same way, pay a fee just to be part of a selection process, sure he might now and again sucker a decent painter or sculptor into paying a submission fee but his operations are really about little more than social media campaigns designed to bring in bags of loot to pay for his annual holidays – there’s far too many operations like this,,it really is impossible to take these books or open call shows that demand a submission fee and treat artists as little more than cash cows in any kind of serious way. What a shame, done properly the book could have been a valuable piece of something or other for those who can’t be bothered to get out to shows and look for themselves, as it it is, ir might make a good door stop or something to prop up that wobbly easel and that’s about it…

What else do we have in the inbox? Something about that Pez show, really must get over to see that one, Miss Bug as well, something about a new 65Daysofstatic album, there’s a blast from our distant past, they were championed rather a lot around here back in their very early days. What else? “:ICYMI: Brooklyn Beckham directs his first-ever music video for JAWS | Watch ‘End Of The World’ via British Vogue”, why do these PR people send us this stuff? And how annoying are those in case you missed it posts reposts that add to the clutter? You only sent it a day a go, give us a moment! .

The Pop Group have announced the reissue of their “highly influential and innovative debut album Y through Mute on 1 November 2019 – remastered and cut at half-speed at Abbey Road. The band’s landmark debut single, ‘She Is Beyond Good & Evil’, will be reissued alongside Y as a bonus 12”. The remastered ‘She Is Beyond Good & Evil’ is here although listening to it on a website via a YouTube post kind of negates all the remastering, here it is though, remastered and as with that live version of Savage Sea at the top of the page, sounding as exciting as they ever did… . .