Organ Thing of The Day: Back there, for a brief moment in time, somewhere in the zine powered days of the last century. Huggy Bear, for about a year or so, were one of the most exciting bands out there. Well more than a band really, a whole ball of questions and attitudes and queercore riot Grrrl positivity. Chris Rowley was one of the lead singers in the band, Huggy Bear were mostly seen as a Riot Grrrl band but one of these singers was a guy called Chris. Huggy Bear were right in there alongside the big bands from that period’s Riot Grrrl explosion, Huggy Bear right up there toe to toe with Bikini Kill, Bratmobile and the big U.S stars of the scene, they released several fine records, the highlight for most would probably be 1993’s excellent Her Jazz single. Huggy Bear split in 94 and Rowley hasn’t really been heard of that much from then until Adulkt Life

London’s Adulkt Life is Chris Rowley, drummer Sonny Barrett, and two members, Arthur Webb and Kevin Hendrick, from fuzzed-up London punk trio Male Bonding, and before that most importantly, PRE. (do Male Bonding still exist? They have been a little quiet in recent times). Apparently Male Bonding’s John Arthur Webb met Rowley while the two were shopping at Rough Trade (good to see it is still the meeting place it was back in the last century, we bought and sold so many zines in there, especially back in the days of Huggy Bear), seems Webb met Rowley and Webb got his bandmate Kevin Hendrick in on the action – and a rather exciting new band called Adulkt Life has formed so it seems…

Adulkt Life released their debut single “Country Pride” earlier this year, and their just-announced album Book Of Curses is on the way later this Autumn. They’ve just shared two songs, “Taking Hits” and “Stevie K,” and both of them are, well you make your own mind up , Rowley is apparently now a 55-year-old, he still sounds forceful and impassioned, he still sounds a little angry, and Pre as well, it was only yesterday that we were asking what became of them, rather like this first taste of Adulkt Life, do they taste a little of some of the more adventurous UK hardcore bands from the start of the century?. Adulkt Life’s debut LP Book Of Curses available Nov 11th.  Preorder at adulktlife.bandcamp.com

More details on the album via the aforementioned Bandcamp

Meanwhile, talking of Huggy Bear and paintings of Chris Rowley and Riot Grrrl attitudes, here’s one of Emma Harvey‘s series of 43 Riot Grrl paintings that she exhibited back in 2018, more about it and Emma underneat the painting… 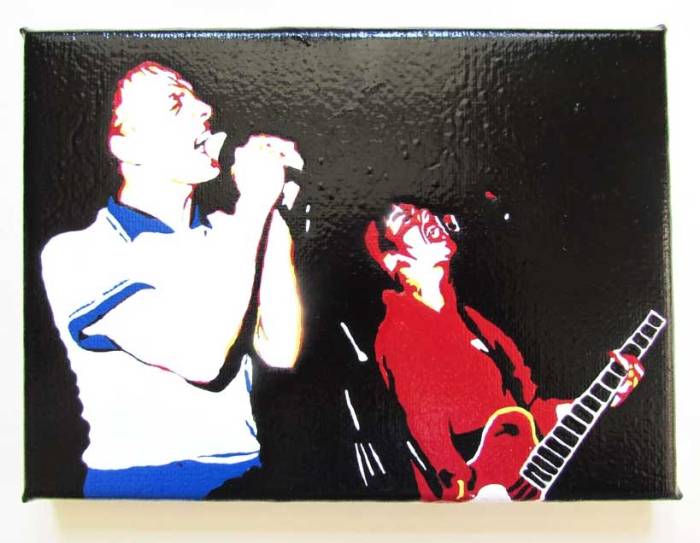 Like we jsut said, that (just up there) is one of several Huggy Bear paintings that featured in Emma Harvey‘s series of 43 Riot Grrl paintings that she exhibited back in 2018, And down there you can check out a video of what Emma has been doing this month ahead of the on-line version of the Art Car Boot Fair that now happens, after the chaos of last week’s first attempt, on Sunday October 4th. Emma had revisited her Ponies Against Patriarchy paintings, this time with a series of hand-painted ponies on a pack of vintage playing cards. The paintings on the cards will be available first via the Art Car Boot Fair next Sunday and then via the Cultivate Gallery shop afterwards (you can find some of her Riot Grrl prints and such in the shop right now)

And why not, Huggy Bear still sound good…..

And here, just for you, a selection of Emma Harvey art. Click on an image to enlarge or to run the slide show…