The 2014 Brick Lane Art Car Boot Fair is just one week away, things are in a paint throwing frenzy right now (things are in a paint throwing state of mass-produced frenzy most weeks around here, art making does not stop).  Got to get the boot loaded and down to Brick Lane, it probably won’t be a savage journey in to the heart of the East London dream or anything like that – well of course it won’t, there is no dream, never was, and if there was then this place is way past any dreamland now.  No Simeon attorneys will be injured, we are in that zone that is the annual build up to something like the Mint 400  now, only we’re not on the edge of any desert and once we get our red shark trunk (or maybe our Vauxhall Victor boot) to that infamous car park we won’t get to leave again until it all ends. No one is heading for anywhere near Barstow, all the money has been blown on Montana Gold and the best Molotow money can buy. 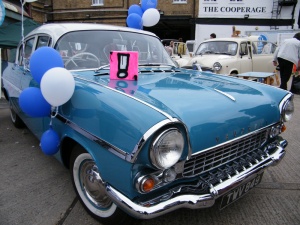 The eleventh annual event and a day that has grown to become one of the most exciting not to be missed events on the busy London art calender.  A genuinely curated event, artists there by invite only, all carefully selected by the organisers – invited artists, collectives, the smaller cutting-edge East London art galleries searched out and invited to take part alongside the established  names and long-term contributors to the rather unique event, names that a constantly dropped, names such as Gavin Turk, Tracey Emin, Sir Peter Blake, Bob and Roberta Smith. Most London Art Fairs demand artists pay to be involved, the entry fees, on the whole, are outrageous, no such thing as quality control, anyone willing to pay gets in. No money changes hands at the Art Car Boot Fair, artists all there by invite and all there taking on the spirit of a car boot fair, bargains to be grabbed, pieces specially produced, artists selling direct from car boots, wallpaper tables and a “mini festival in it’s own idiosyncratic orbit” (to quote Misha Milovanovich).

Today’s news is that Ben Eine has been invited to join in, the Act Car Boot team have announced themselves happy about this.    Apparently Mr Eine will be painting a white van on the day, he will have some exclusive prints on sale

It all happens on Sunday June 8th, gates open at midday, get there early if you’re after a slice of art from a big name, or avoid the rush and get the pick while everyone else fights over a Peter Blake