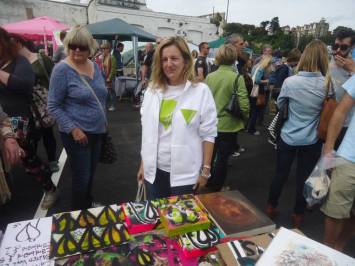 Sunday Sunday, it has been an interesting week, not much time for sleeping… Yesterday was all about a day trip on the train with bags full of art and a visit to the Folkestone seaside where the Folkestone Triennial as well as the Folkestone Fringe are currently taking place.  The Fringe yesterday included the third and final Art Car Boot Fair of the year (Brick Lane, East London and Liverpool being the first two parts of this year’s Art Car Boot Fair adventure).   A mad early morning rush out of London, bags and rucksacks heavy with art, seaside treats in store, catch the train, get out of the city…  Been looking forward to this one, the on-line tasters, the programme promises and advance videos from both the Triennial and the Fringe have had us anticipating and the Art Car Boot Fair is always a pleasure to be part of.

There’s an ITV news video here that gives you a flavour of the event that is the Art Car Boot Fair.  People lined up along the harbour waiting to get in at midday, excitement in the air, artists frantically getting their boots ready (the event is sponsored by Vauxhall, they gave us the same blue car they gave us in Liverpool to use as a “boot”), personally I was lusting after one of the old ones, but hey, they gave us a fancy modern blue one (for the day)

Tracey Emin was the main headline of couse, well alongside Sir Peter Blake and Gavin Turk and such – “Her work is usually sold in galleries fetching thousands, if not millions, of pounds. But today Margate’s Tracey Emim was among many high-profile artists selling their work at a car boot sale as part of the Triennial in Folkestone. Andy Dickenson reports and speaks to artists Jim Moir, Gavin Turk, Julia Riddiough and organiser of the Art Car Boot Fair, Karen Ashton”. .Tracey was there by the way, just not while the reporter and cameras were.

We were there as Cultivate, we this time being myself, Emma Harvey and Quiet British Accent as well as Folkestone painter Tim Skinner (well it would have been rude to take Cultivate to Folkestone without inviting a local painter to come get involved and Tim is one of our favourite painters)

A day of seaside treats then, not sure where the Triennial ends and the Fringe starts (and not sure if it matters), but we can report that Folkestone is a town alive with art and a town that looks, on first impression, to be a town regenerating itself in the right way   There a buzz provided by the art, a buzz that’s there from the moment you get off the train and encounter the big Yoko One Earth Peace billboard. The goldrush is helping of course, people engaging and mostly having lots of fun digging on the beach (seems to be a lot of ska around the place as well), we liked Folkestone and out day of seaside treats.

This not a review, this is not a piece of critical artistic analysis of the opening weekend of events  (that might just come along later), these are just some photos of my day, our day, by the seaside taking part in the Art Car Boot Fair and the Fringe, leaving art around the town (pleased to see people twittering about finding it) and enjoying being artists.

Some photos of the day then,  photos from the Cultivate “boot” at the Folkestone Art Car Boot Fair, a flavour of the Fringe and the Triennial as well as more of my art drops around town – pieces painted on recycled cardboard found on the street and put back out on the street.  Enjoy the photos, click on one to enlarge it or run the whole slideshow

Thanks for a great day Folkestone, we shall be back soon if you’ll have us, it was indeed a much needed seaside treat  (Sean)

2 thoughts on “ORGAN THINGS: The Folkestone Art Car Boot Fair, the goldrush, the Triennial, the Fringe, me and Yoko Ono and…”